North Central College’s Science Center reached new heights during its construction when the campus community celebrated the hoisting and placement of a ceremonial final steel beam during a Topping-Out Celebration March 14.

Traditional among ironworkers, the ceremony is sometimes called Capping Off, or Topping Off, or Topping Out. Regardless, said President Troy D. Hammond during his remarks, “It’s a significant construction milestone that we’ve reached only because of the dedication and hard work of many, many people.”

An extraordinary 125,000-square-foot facility, the new Science Center will benefit North Central students for generations to come, said Hammond. “This will be the premier, multidisciplinary science facility in the Midwest. It is designed to ensure that it serves every student, of every major.”

The historic topping-out event attracted North Central students, faculty, staff, alumni, trustees, neighbors, community leaders and elected officials. All were invited to sign their names on the beam before it was hoisted into place.

“I would like to think I left a mark on the institution in many ways, but now my mark is physical and literal,” said Steve Johnston, Roger and Nadeane Hruby Professor in the Liberal Arts and Sciences and professor of biology, when signing his name.

“I am now one with the building, hashtag ChemSquad,” said Dean Pappas ’18. “It makes me feel like I’ll be a part of North Central forever,” said Hannah Kats ’19. Other students who signed the beam said, “I feel like I’m making history … It’s exciting they opened up the signing to all students. I think it strengthens our sense of community and gets everyone ready for it.”

Many elected officials were among those signing their names to the beam, including Illinois Lt. Gov. Evelyn Sanguinetti who addressed the large crowd. “It’s important for us to get our kids ready for the STEM fields. You (North Central College) will be the envy of all of Illinois because you are keeping up with the needs of the children who are our future.”

“The Science Center represents a long-held dream of our entire community,” said Hammond. “A world-class city like Naperville deserves a world-class College, with world-class programs and facilities. And this new Science Center will take us a giant step toward realizing that goal.”

Associate Professor of Chemistry Jeff Jankowski is most excited about the opportunities to teach and learn in a combined classroom and laboratory setting. “We’ll have clear sight lines, where we can lecture then shuttle into the lab to test what we’re learning.”

Students like Kelsey LaMartina ’18, a biochemistry major, invest many hours at the current science center. “I’m looking forward to the new spaces. Having bright, modern classrooms and open gathering spaces with windows, spacious labs where you can easily move, and places to sit and work will be amazing.”

With the foundation and steel structure firmly in place, the exterior masonry, enclosure work and interior buildout can start this spring. The building will be open for classroom use by March 2017. “This time next year, North Central College looks forward to holding a ribbon-cutting ceremony and tour,” said Hammond. Exterior site restoration and occupancy will continue through summer 2017.

The Science Center is a cornerstone of the College’s $150 million Brilliant Future Campaign that will also grow the College’s endowment to support student scholarships and excellence in teaching by world-class faculty. In addition, it will support other capital improvements to enrich the student experience and create additional academic opportunities for students.

The building is a privately funded project, so North Central College relies on the people who believe in it to continue to step up and support it. Many naming opportunities are still available; contact the Office of Institutional Advancement at advancement@noctrl.edu or 630-637-5211. 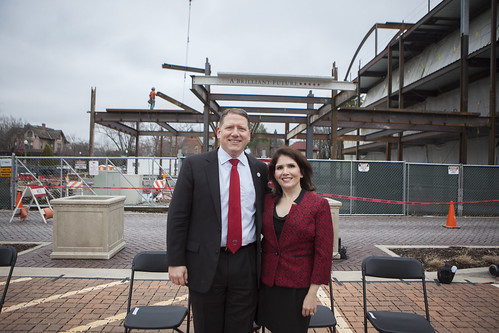