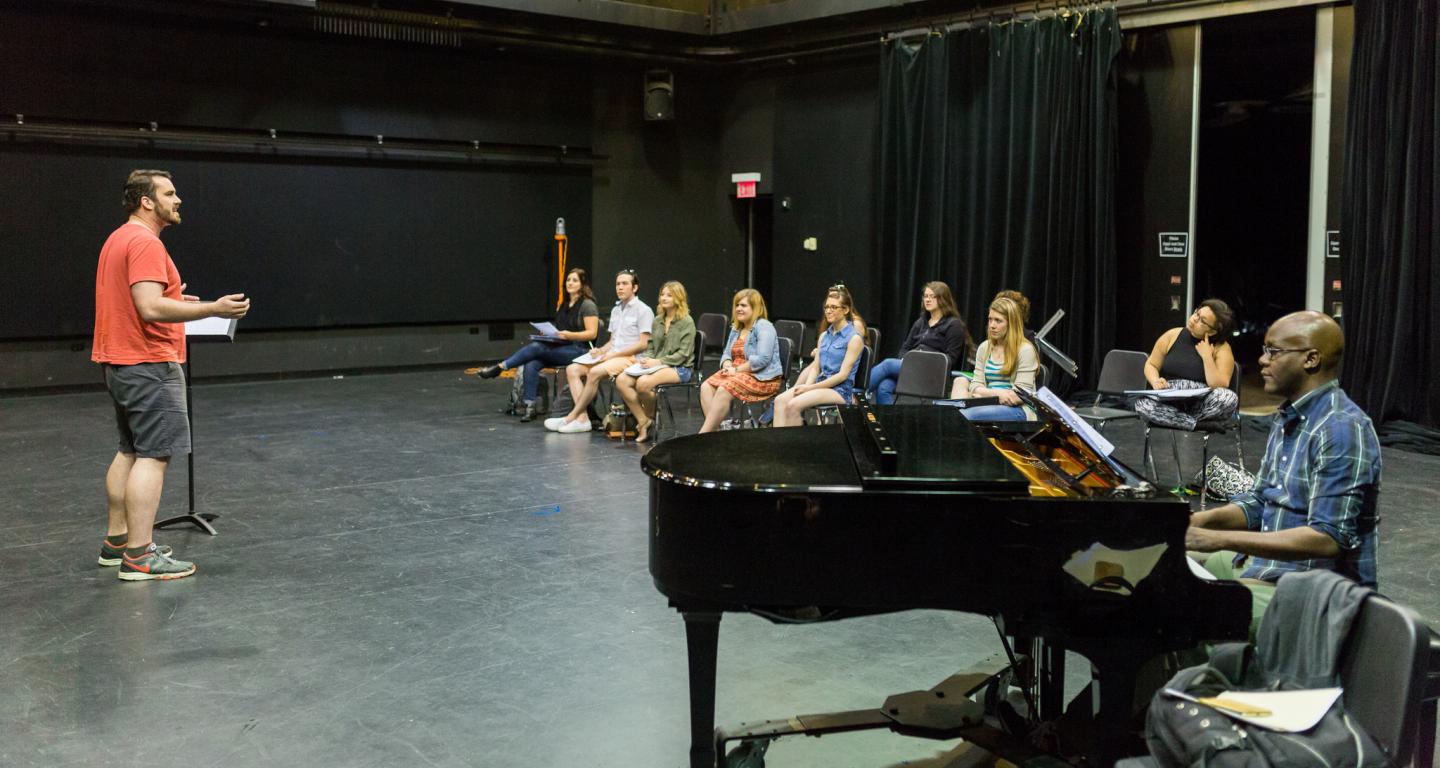 “When North Central College presents ‘9 to 5: The Musical’, I think it’s going to show off [the growth of the theatre department] in a number of ways,” said Jermaine Hill, assistant professor of theatre. The show opens Nov. 10 in Pfeiffer Hall.

“9 to 5” represents the addition of full-time faculty, adjunct voice teachers, and guest directors and choreographers who are noted professionals in Chicago theatre. The production also will reflect the growing number of students majoring in theatre and an expanded, specialized curriculum. With some 110 students in the program, cast numbers have jumped from previous years. “9 to 5” is a cast of 21 students, compared to the 15 or 16 students involved in last year’s fall musical.

Hill recruited guest director Scott Weinstein to direct the production of “9 to 5: The Musical.” Weinstein is one of the most sought-after directors in Chicago. Last spring, he won a Jeff Award for directing for his production of “Rent” at Theo Ubique Cabaret Theatre. He recruited two other Chicago artists to work with our students—Jeff Award nominee Danny Spagnuolo as choreographer and multiple Jeff Award nominee Rachel Sypniewski as costume designer.

“In terms of curricular programming, Carin Silkaitis [associate professor of theatre] and I looked at peer institutions to see where our musical theatre program needed some revision while aligning with theatre classes already in place,” said Hill.

As a result, Hill introduced six new courses that brought North Central’s theatre major in line with aspirant and peer institutions across the country, including courses in somatics, musical theatre scene study and musicianship for the actor. He has built a curriculum from the 100- through 400-level to give students thorough musical theatre training in terms of acting, performance, and audition techniques consistent with the department’s learning outcomes.

“Because I teach both acting and musical theatre, all our students are getting the same language throughout their classes, which I think is really helpful,” said Hill. “‘9 to 5’ will show the students’ development in that area—they’re starting to meld the work in their acting classes, voice lessons, our musical theatre acting classes and adding it to their performance work.”

In their personal careers, the faculty continue to push to provide a superlative example for North Central students.

“Carin and my colleagues strive to make our program stronger for our students through our course offerings and our engagement with Chicago-area artists,” said Hill. “We all remain active as performers and scholars, bringing artist-educators and real-world experiences to the classroom to educate and inspire our students who are pursuing a pre-professional track to the arts.”

Hill studied at the New England Conservatory of Music, one of the top music conservatories in the country. His professional career has taken him all over, from performing at New York’s Carnegie Hall and music directing and creating production shows for Royal Caribbean Cruise Lines to recently landing an Onion commercial and project with Warner Bros. At the same time, he continues his vocal coaching and music directing career in Chicago. This past summer, he musically directed a show at the Chicago Musical Theatre Festival and will be co-music directing “Ragtime” at Griffin Theatre next spring.

Silkaitis also keeps a prolific career. She starred in a one-woman show called “I Do Today” by Sarah Myers at Greenhouse Theater this fall, played a role in the SAG feature “Unexpected” with Cobie Smulders (“How I Met Your Mother”) and Anders Holm, and had a co-star role on the NBC television show “Chicago Fire.” She is also the artistic director for The Other Theatre Company.

Other members of the theatre department include Elizabeth Bracken, assistant professor of theatre, who is coordinator of North Central’s theatrical technology and design major. Her set design for “The Magic Play” can be seen at the Goodman Theatre beginning October 21.

Laura Lodewyck, assistant professor of theatre, is working with Teatro Vista to document the world premiere of “Parachute Men,” which debuted at Carnival 2015, a festival of Latin plays held last summer at DePaul.

In the past two years, North Central has added two voice teachers to the theatre department. Joseph London, a graduate of the Manhattan School of Music and the Juilliard School, and Becky Wilson, who has her DMA in vocal performance from the University of Illinois.

“We’re in a really great place in terms of our peer institutions,” said Hill. “The department is in the process of seeking accreditation from the National Association of Schools of Theatre. We continue to strive to provide a well-rounded, immersive theatre training program while remaining firmly rooted in the tradition of a comprehensive liberal arts education.”