During its 2017 Homecoming Reunion Celebration, North Central College presented medals to four Shimer College individuals for their efforts in support of North Central’s acquisition of the Shimer Great Books School.

These medallions continue a tradition started in 2011 at North Central’s Sesquicentennial to recognize certain individuals whose responsibilities and personal commitments make them vital partners in the College’s success. This year’s medal recipients from Shimer College were honored for their instrumental work in making the acquisition a reality, successfully transitioning the Shimer Great Books School to its new home in Naperville.

In May 2016, North Central and Shimer agreed to a Memorandum of Understanding with the intention of North Central acquiring and integrating Shimer. In June 2017, the acquisition was completed. Classes began at the start of the academic year and North Central welcomed nearly 4,000 Shimer alumni to its community. 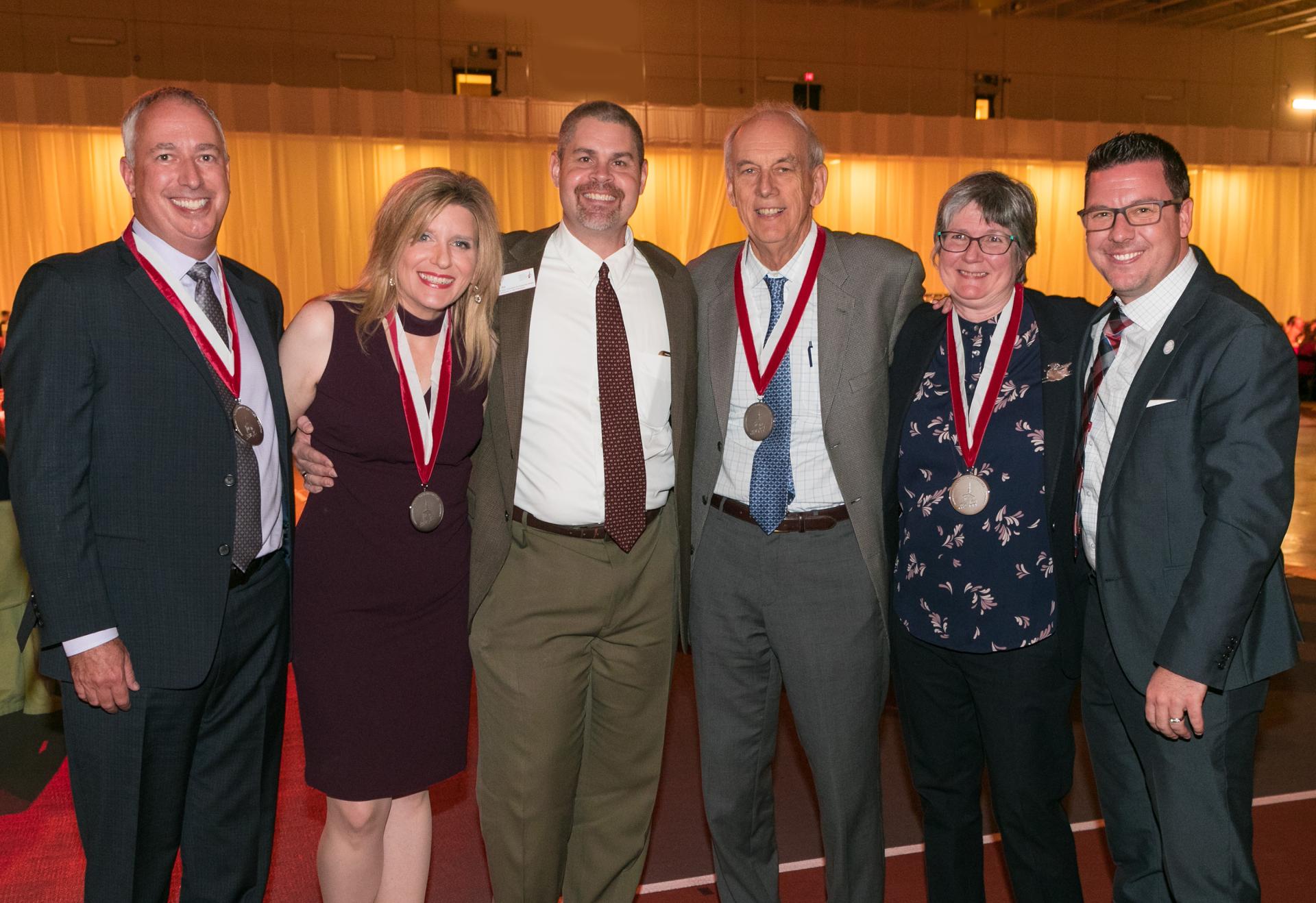 In presenting the medals, North Central’s Vice President for Institutional Advancement Rick Spencer made the following comments about each recipient.

Dr. Chris Vaughan S ’87
“Shimer board chair, alumnus and recipient of Shimer’s honorary doctor of letters in 2017, Vaughan led his board through the immensely complex acquisition with enthusiasm and grace. His strong leadership, as well as his vision and perseverance as a passionate alumnus, helped the entire board remain focused, motivated and engaged throughout the process,” said Spencer.

Vaughan is president and chief strategist for Sequence Consulting, Inc., a company he cofounded. After graduating from Shimer College in 1987, he earned a master’s degree and doctorate from Indiana University Bloomington.

Rebecca Sundin S ’99
“Shimer’s board vice-chair and alumna, Sundin served as the indispensable point-person for North Central throughout the transition process. Her superb organizational, operational and interpersonal skills helped smooth the path despite its complicated nature and nearly constant twists and turns. Her calm, even-keeled demeanor set people on all sides at ease and built excitement,” said Spencer.

Sundin is general counsel at Americaneagle.com. After graduating from Shimer College in 1999, she earned a master’s degree from The University of Chicago and a J.D. from Chicago-Kent College of Law, Illinois Institute of Technology.

Dr. Robert Keohane S ’61
“As a Shimer College trustee and alumnus, Keohane played an essential role in the important fundraising effort of the last few years. In addition to showing great personal generosity, he worked tirelessly to generate financial support from other alumni, trustees and friends. His boundless enthusiasm for all things Shimer and his unwavering commitment to Shimer students have helped safeguard the future of this unique pedagogy,” said Spencer.

Keohane is professor of international affairs, Woodrow Wilson School of Public and International Affairs at Princeton University. After graduating from Shimer College in 1961, he received a master’s degree and a doctorate at Harvard University.

Dr. Susan Henking S(H) ’17
“As president emeritus and honorary alumna of Shimer College, Henking demonstrated exceptionally talented leadership as she guided her school through the acquisition process. At the same time, she kept the 2016-2017 academic year moving smoothly for Shimer students, who completed a successful school year despite the changes going on around them. Her vision and dedication will help ensure that Shimer’s distinctive pedagogy lives on, preserved for generations to come at North Central College,” said Spencer.

Henking received her undergraduate degree from Duke University and a master’s degree and doctorate from the University of Chicago. Before serving as president of Shimer, she was professor of religious studies and professor emerita at Hobart and William Smith Colleges.