Illinois is rich in varied, long-standing history found deep within both its metaphorical and literal heart. With numerous local sites ripe for exploration by archaeologists, it is only natural for the state to celebrate a month in honor of archaeology awareness. Dr. Dale F. Simpson Jr., assistant professor of criminology, sociology and anthropology, made sure North Central students would benefit from this occasion by organizing several experiential learning events during September.

Simpson brought students to three prominent sites over the course of the month—Macktown in Rockton, Ill., the Winfield Mounds in West Chicago, Ill., and the McCarthy House in Palos Park, Ill.—and each had something unique and beneficial to offer.

The Macktown Forest Preserve maintains the first pioneer settlement in Illinois’ Winnebago County, built by pioneer Stephen Mack Jr. in 1839, along with archaeological deposits that date back 8,000 years. Archaeologists dig there to learn more about pre- and post-contact American society as it developed and expanded west across the continent.

The mid-19th century was a time of innovation, and Simpson afforded his students the chance to use innovative technologies of today to discover more about our shared history. This includes geographic information systems or GIS, and applications such as viewshed and hotspot analyses. These technologies help modern scholars determine what was in the visible area for people living at the site at the time, lending insight to what they built and why, as well as decipher which areas are most likely to contain artifacts before digging.

“One of the things we really tried to do was bridge the gap and give (our students) both physical techniques and digital research techniques, which I think is still valuable in today's day and age—all fields need to be doing that,” Simpson said.

In addition to offering opportunities to explore the area and study artifacts found at the site of the settlement, several buildings in Macktown operate as “living museums.” Simpson’s students participated in mid-19th century practices and were treated to an authentic dinner and singing done exactly as it would have been in the 1830s. Simpson highlights Macktown as a rare historical example of white settlers existing in relative harmony with Native Americans.

“I think it's just one of those places that shows when cultures come into contact, there can be beneficial outcomes—it doesn't always have to be warfare and conflict,” said Simpson. “We were transported to the moment, and I think the students really got into it because that was bringing the past to life for them.”

Simpson and his students sitting down for a traditional dinner at Macktown.

North Central students further explored the pre-contact period, meaning the era before European settlers arrived in North America, by participating in an archaeological hike into the past of DuPage County at the Winfield site. Three prominent effigy mounds are the highlight of the site, which was settled by First Nations members who came to the West Branch of the DuPage River during the Woodland Period (1,000 B.C.E. to 1,000 C.E.). The hike involved North Central faculty and staff, including Raleigh Blasdell, associate professor of criminology, sociology, and anthropology. In addition, Simpson led an earlier hike through the site with Cub Scout Troop 99 from Plainfield, Ill., who were working toward earning their Nova STEM patches.

The month’s activities concluded at the McCarthy House with a vital field project that brought together students from North Central, the College of DuPage and the University of Illinois at Urbana-Champaign, as well as professional archaeologists and activists from throughout the area.

“We conducted a public archaeology initiative on the same lands the infamous illustration ‘Injun Summer’ was painted,” Simpson explained. “Injun Summer” is a pair of illustrations created in 1907 by John T. McCutcheon that were formerly re-printed every year in the Chicago Tribune along with a culturally insensitive narrative from the perspective of a farmer describing the origins of the phrase “Indian summer.”

“Our main goal, therefore, was to better represent and honor the Traditional Owners who came before us and recognize their contribution to Illinois' culture-history by investigating their ancestor's land and lifeways,” said Simpson.

The North Central group made important determinations from their findings, including establishing the borders of the site as well as how modern farming, landscaping and construction projects may have damaged the site’s original form. 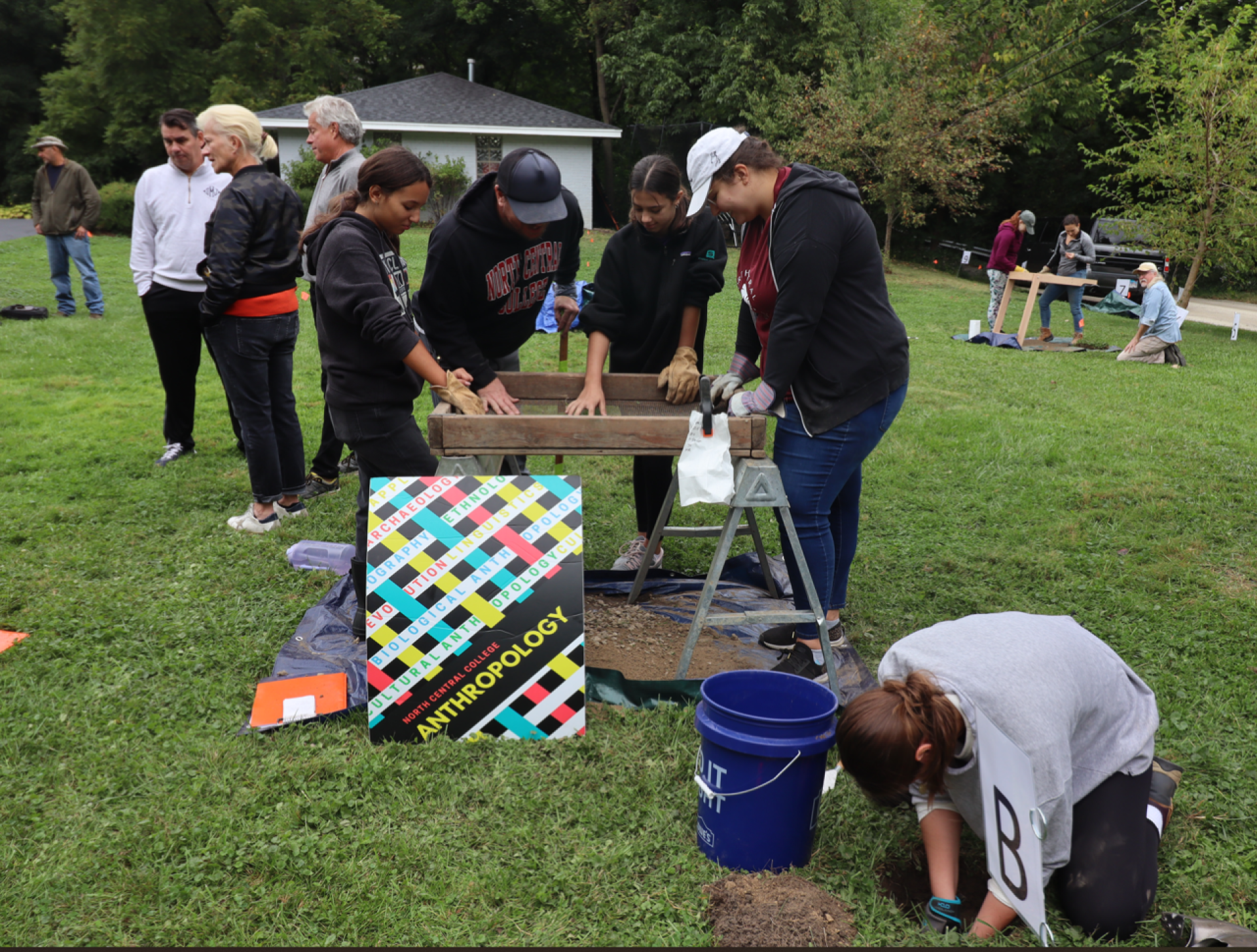 During the month, students from Simpson’s program got word about winning prestigious scholarship opportunities. Grace Watson ’23 learned she will receive funding from the National Science Foundation to do geochemical research on obsidian materials from Rapa Nui, also known as Easter Island, at the Field Museum of Natural History in Chicago. Watson and Megan Sands ’23 have also been awarded the Gloria Levitt Anthropology Scholarship. Named for Levitt ’03, who interned at the Field Museum before moving on to work there professionally, the scholarship supports North Central students each year.

The opportunities offered to North Central students through the anthropology program are rare and formative for those with a passion for archaeology and history. Simpson says he particularly values helping students find truth in themselves from these encounters with the past.

“The way to really be, as we call it, ground proven or ground true, is to dig in the dirt,” Simpson said. “Here they are excavating sites to better understand their ancestors. (We are) really, really fortunate to be in these unique places.” 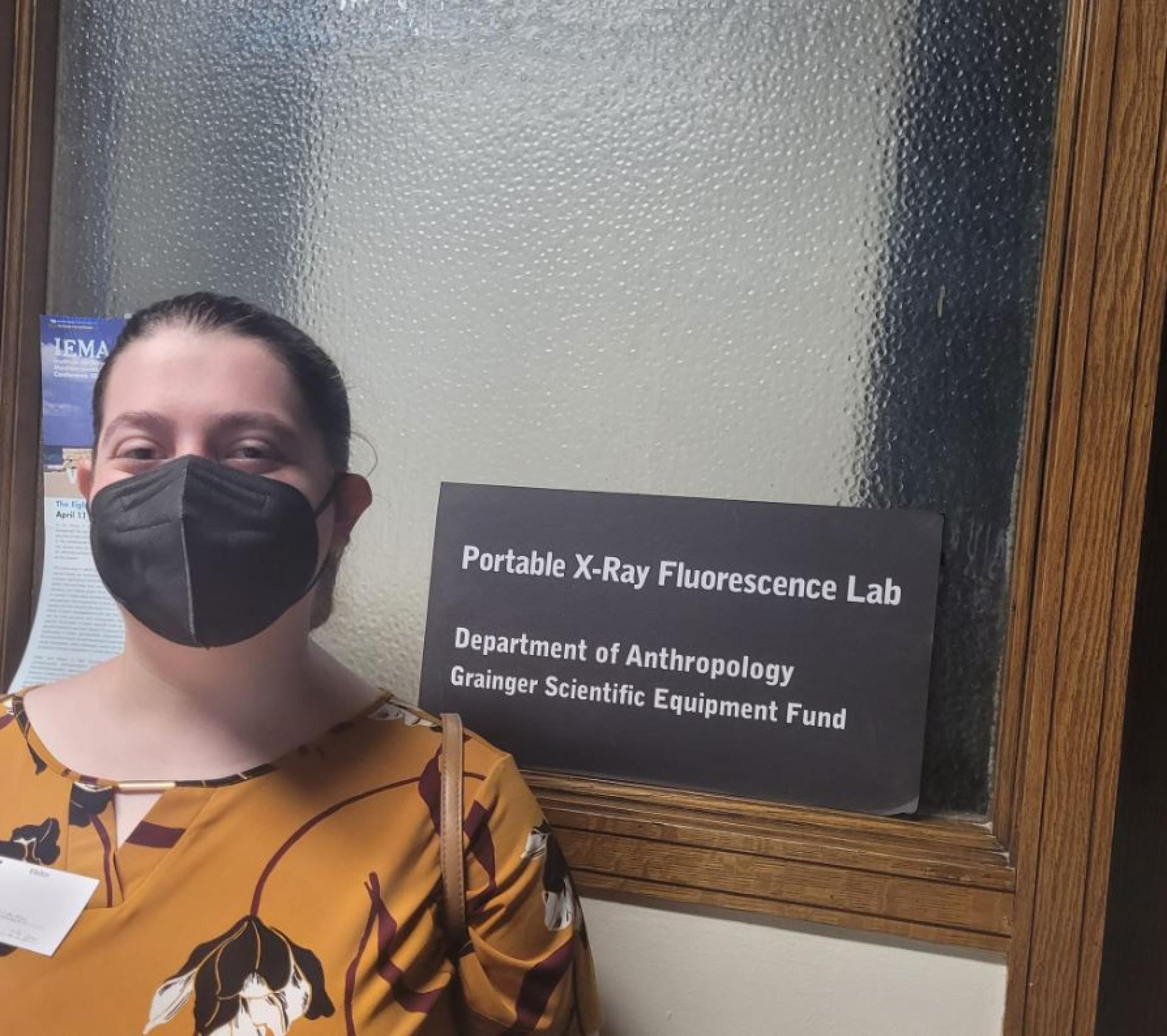 Grace Watson in a lab at the Field Museum.