2,360 images: How the golden ratio wall came to be

Since its soft opening in March, North Central College’s Dr. Myron Wentz Science Center has attracted thousands of students and alumni to its lobby display: the golden ratio wall. A brilliant collage of 2,360 photos in a design inspired by the famous mathematical concept, the golden ratio wall stands as a testament to the College’s grand history.

But how did it come to be?

“The Office of Marketing and Communications worked with the operations and mathematics departments,” said Valla Aguilar, director of marketing at North Central. “The College hired the Maude group, a creative firm, to do the interior branding of the Wentz Science Center.”

The Golden Ratio Wall from North Central College on Vimeo.

So why the golden ratio?

The name belongs to a mathematical concept illustrated across numerous disciplines due to its aesthetically pleasing shape formation; art, photography and science all show approximations of the golden ratio. While it makes for quite an impressive design, the golden ratio holds a greater purpose in the Wentz Science Center.

“The golden ratio is a very interdisciplinary concept,” said Aguilar. “It is the essence of what the College built the Wentz Science Center to be. This building connects science and other disciplines together.”

The project involved researching, identifying and selecting thousands of photos from the 1860s through modern day. To accomplish this, Aguilar worked closely with six staff members and students in the Office of Marketing and Communications, as well as North Central’s archivist Rebecca Skirvin.

“We did our best to ensure all the photos on the wall had people and places already identified,” said Skirvin on the selection process. “Usually, I went off information written on the back of the photos, but occasionally I would consult a yearbook photo to identify someone in a different picture.”

Some of the older photos on the wall include the construction of Old Main in 1870; Augustine Smith, North Central College’s first president in 1861; and other noteworthy trustees and alumni such as Albert Goldspohn, whose name is honored by Goldspohn Hall on campus. The process was exciting for Skirvin, who experienced the College’s history through years of photos.

“It’s always a thrill to pull old photos and see familiar locations, such as Old Main and Brainard Street, and how they’ve changed over the years,” said Skirvin. “It’s also fascinating for me to compare senior class photos to photos of the same person later in life; those experiences never get boring.”

The golden ratio wall comes with an interactive kiosk that allows guests to explore the vast array of images, either through categories such as academics or athletics, or by decade such as the 1980s or 2000s.

A guestbook is also available for virtual signatures, giving students and alumni the chance to preserve themselves at the institution they love, either in person or online at northcentralcollege.edu/goldenratio.

“I think people love seeing images tell the story of North Central,” said Aguilar. “The goal wasn’t to just put up a pretty picture, but to be able to walk into a building and absorb the history and greatness of the institution.” 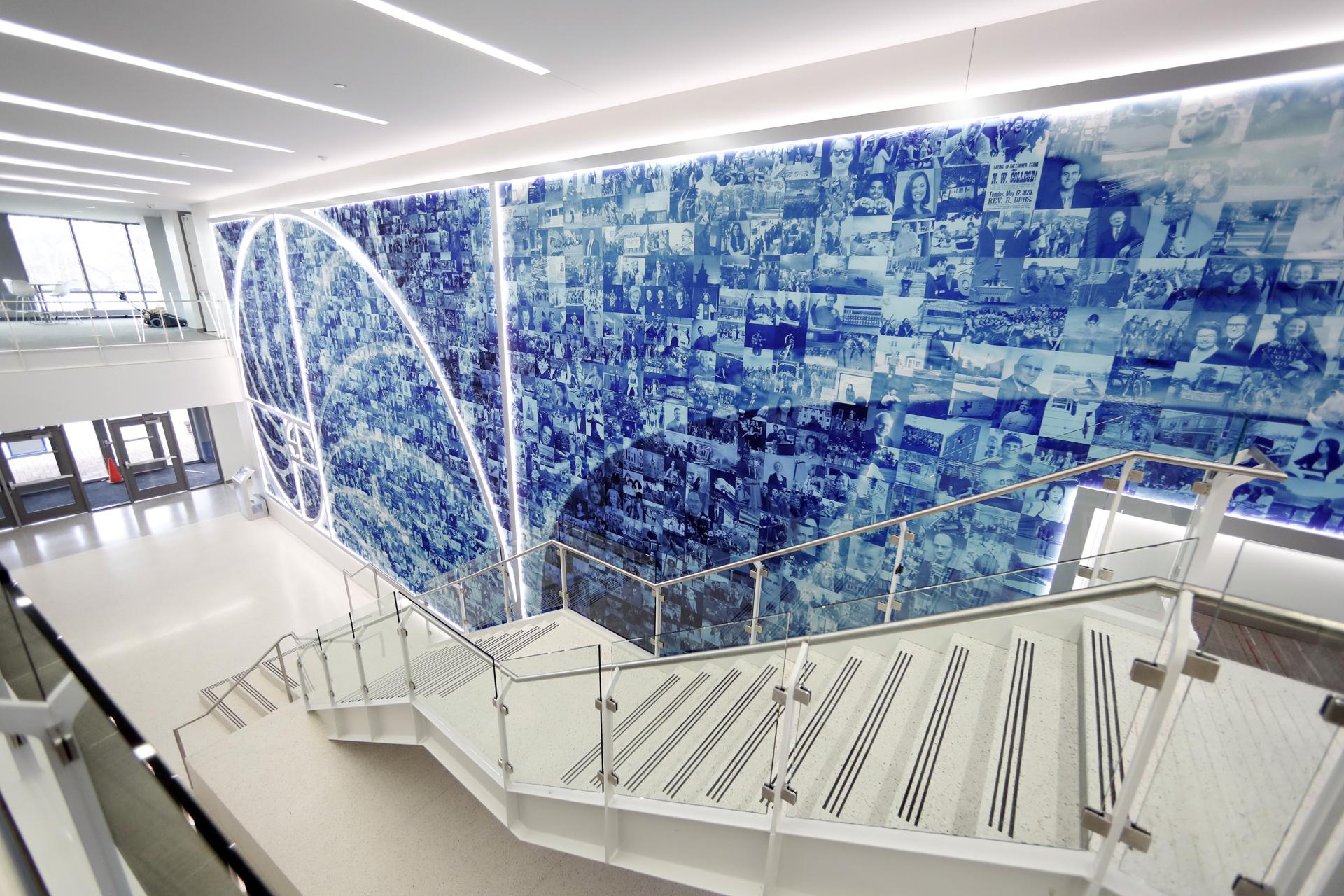