North Central College played a unique role in a new educational partnership between two of the most powerful and influential nations in the world.

The College was selected to pilot a prestigious international program facilitated by NASPA, an international professional organization for student affairs. NASPA worked with the Shanghai Municipal Education Committee to create an exchange program, sending two fellows from China to the United States to study student affairs practices at North Central College. The program is the first of its kind between NASPA and educational institutions in China.

“NASPA knew that (North Central) has a well-run student affairs operation doing innovative and interesting things that (fit) what the exchange is set up to do,” said North Central Vice President for Student Affairs and Strategic Initiatives Kimberly Sluis. “There was confidence that there’s good work being done (at North Central) that would be what we’d want somebody coming halfway across the globe to learn.” NASPA Vice President for Professional Development Stephanie Gordon identified North Central as an outstanding choice for the pilot program.

“North Central is one of only two schools, along with Washington University in St. Louis, hosting fellows from China as part of this program,” said Assistant Vice President for Student Affairs and Dean of Students Kevin McCarthy. “Shanghai doesn’t have the same infrastructure for student affairs that we do, but it is a very innovative and forward-thinking community and they wanted to learn.”

Dr. Ran “Jason” Chen, vice dean of student affairs for the School of Sociology and Political Science at Shanghai University, and Yu “Lily” Chen, student counselor in the Foreign Language School at Shanghai Lixin University of Accounting and Finance, attended meetings, observed classes and talked with administrators, faculty and staff. They looked to discover all they could about student affairs at North Central, with the goal of improving the experience for students at their home universities, as well as for international students at the College.

Jason Chen and Lily Chen (not related) told their hosts they were very interested in the wide array of services at North Central designed to enrich personal development. They particularly wanted to learn about programs like Early Alert, mental health services and student activities.

In addition, Jason and Lily attended a full slate of Homecoming festivities, student organization events, and Campus Coffee gatherings, which they particularly enjoyed. Campus Coffee is a weekly event during which all faculty and staff are invited to enjoy refreshments and have conversations.

When asked what his first priority would be for incorporating his research back in Shanghai, Jason said, “I will copy Campus Coffee, North Central style, at my school A.S.A.P.!”

Beyond social gatherings, Jason and Lily were extremely impressed by much of what they learned about the student affairs process at North Central.

“Honestly, I am really moved by their professional work and dedication,” said Lily.  “They have specific goals and a detailed working process. It’s a powerful system.”
Jason singled out the efforts made by North Central to make students feel welcome and appreciated. “The student who chooses North Central College will definitely love the caring, supportive environment here,” Jason said.

He went on to relay an anecdote from President Hammond about a professor easily remembering a student he had in class 10 years before. “There are 150 students to a class in Shanghai,” said Jason, adding that such lasting connections are not something he is used to seeing.

Jason and Lily also absorbed the culture of Naperville and the surrounding areas during their stay. Jason brought his wife and two daughters with him and as experienced world travelers, the family had little difficulty acclimating. They enjoyed living in Geiger Residence Hall and going on culinary adventures; they used a North Central meal plan to eat at Kaufman Dining Hall, and Jason’s older daughter loved Lou Malnati’s Pizza. Jason followed the same advice he gives to visitors when they go out to eat in Shanghai: “Don’t ask, just try.”

Lily, who stayed in New Hall, was homesick and missed her three children, but she appreciated Naperville all the same. “It’s a very quiet and friendly town. I enjoyed the colorful autumn very much,” Lily said. “Life in Shanghai is obviously more crowded than here, but I never feel lonely. I think Naperville is a place fit for thinking; Shanghai is fit for feeling.”

Jason and Lily will conclude their visit with a report about what they think the College can do to provide a more beneficial experience to international students, particularly students visiting from China. Jason’s goal is to increase the number of Chinese students who come to North Central to study from the 10 students who are here now. “I hope we can establish a communication platform and build a bridge between North Central College and Shanghai University,” he said. “Maybe we can start with some programs such as a D-term trip to Shanghai.”

Jason is confident that a Chinese student would feel supported and secure coming to North Central, and that they would appreciate the environment here. “Naperville is one of the safest cities in which I have lived, and it has an invaluable history,” Jason said.

Lily hopes that this program is just one of many to come. “In the (past), communications between China and America’s higher education institutions have mainly focused on academic areas,” she said.  “With the increased number of exchange programs, I think we both should (try to get to) know each other better to serve students better, to help them (make the transition to professional life) smoothly.”

Ultimately, the trip proved to be worthwhile for the visitors. “Every day at North Central is unique. It's (been) a valuable and unforgettable experience in my life,” Jason said.  “As the first NASPA China fellows, we are pioneers, and we are so glad that we chose North Central!”

[Photo below: Jason Chen and Lily Chen standing in front of Old Main.] 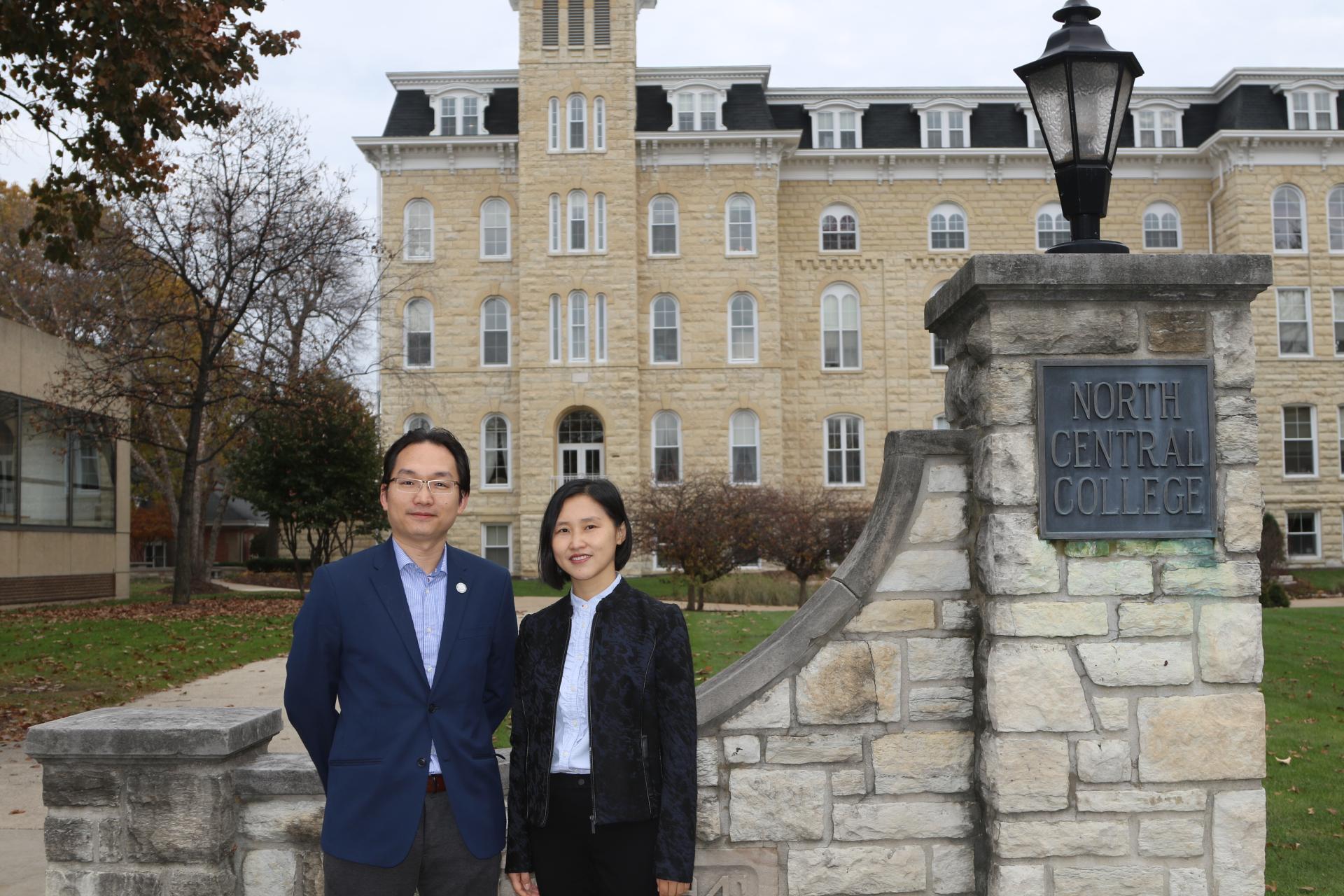