Davonte Sanders-Funches ’18 is a finance major from Bolingbrook, Ill. during the week. While pursuing his degree and preparing for the next steps after college would be more than enough to earn him a break on weekends, it’s during those days off that he really shines.

Sanders-Funches is in the midst of a highly successful season competing for North Central’s forensics* team, having already secured two first-place finishes and three more top-six finishes. As a four-year member and co-captain of the team, he represents the College proudly as a speaker while finding an outlet for his considerable creativity.

In addition to stimulating Sanders-Funches’ passions, he finds that forensics also develops his mind.

“Competing in forensics has helped me form a critical eye,” he said. “I take the time to look at ideas, problems or situations from multiple perspectives, not just the one I agree with. This aids me in my writing and in conversation with other students.”

Sanders-Funches’ top event this year is Program Oral Interpretation (POI). It involves preparing a 10-minute performance from two or three genres of literature. They can include drama, poetry, prose, news articles and more. The goal is to construct a narrative from the different pieces around a unified theme and then use oral performance to deliver the message of the literature. The program educates, entertains, inspires and persuades an audience, often all at once.

“I start by heavily researching the topic I will be speaking about. This is so I can form a coherent argument,” Sanders-Funches said. “Once the research is done, I’ll find as much literature (about the topic) as I can. Once I have all the literature I begin weaving it together in a way that provides a story arc. When this is done I have a complete program and I work on memorization, characterization and blocking (movement).”

The latest POI program Sanders-Funches has created combines two poems, articles from the Washington Post and a YouTube clip to tell a powerful story about the history of lynching of African-Americans in the Jim Crow South. Sanders-Funches delivers each piece in the program from a different narrative perspective, using vocal inflection, facial expressions and physical movement to create distinct characters. He keeps every segment of his literature in a small binder that becomes part of his performance.

The forensics season involves a great deal of preparation and travel to tournaments throughout the Midwest. Participants commonly compete in numerous different events concurrently and change the pieces that they perform for each event during the season. In addition to POI, Sanders-Funches competes in Poetry Interpretation, Dramatic Interpretation, Dramatic Duo and Persuasive Speaking, meaning he has to do a lot of writing, revising and rehearsing in a short amount of time. 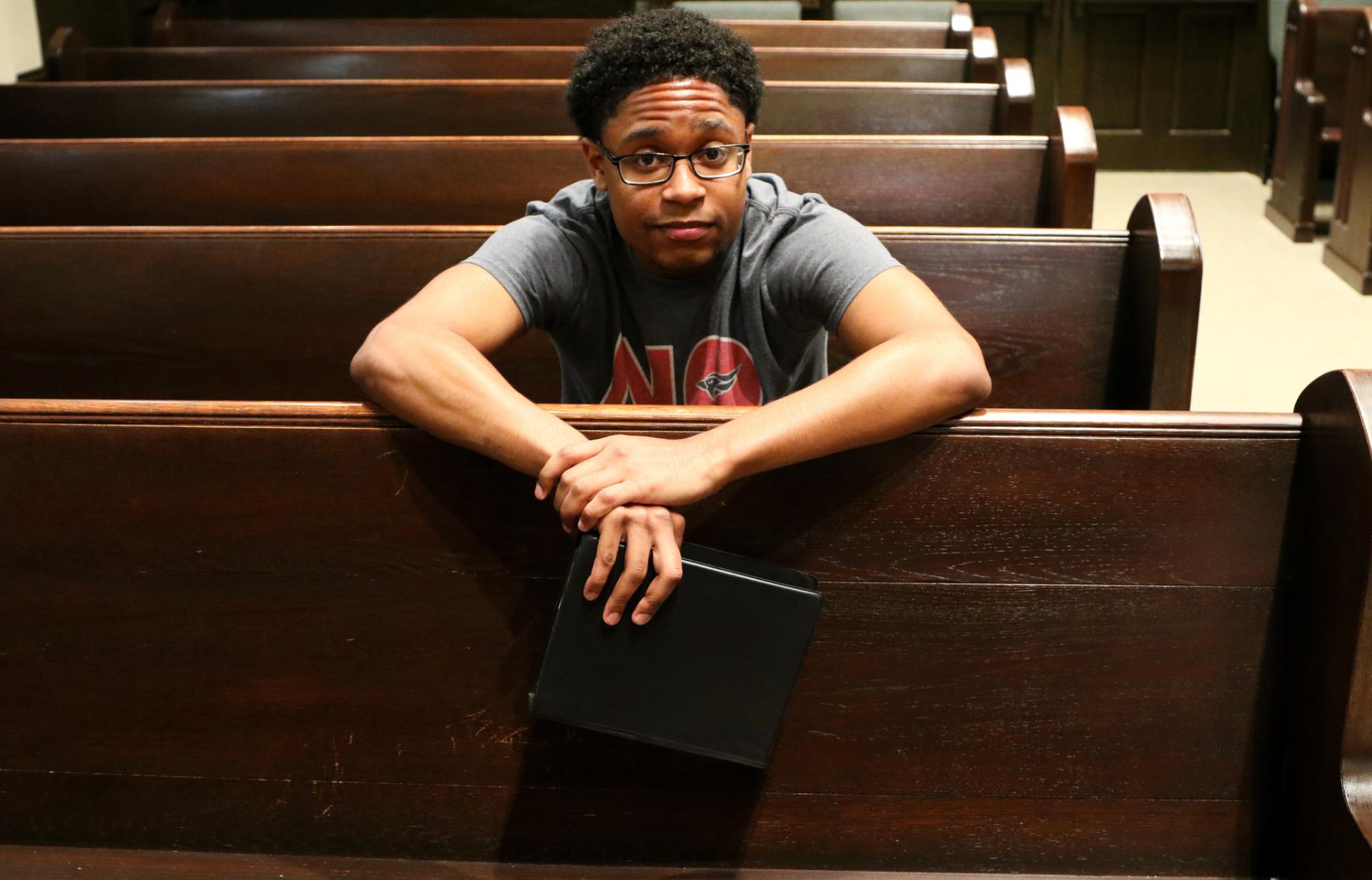 Luckily, Sanders-Funches is rarely without inspiration. After finishing the research for his POI, for example, he said it took him four to five hours to prepare the program.

“My mind cycles through ideas really fast when I sit in silence. So I would have about 10 great ideas to try if I sat down for one hour or so,” he said.

Balancing multiple tasks comes naturally to Sanders-Funches. In addition to captaining the forensics team, he is a resident assistant and a member of the Black Student Association and the Bias Education team on campus. A recognized leader in the student community, Sanders-Funches was also part of the Homecoming court this past fall.

With what time and ideas he has left over, Sanders-Funches exercises his imagination by rapping, a pastime he first took up in high school. There is a significant connection for him among his chosen artistic pursuits.

“I would say since I write lyrics I have a deep connection with words—how, what, when and why they’re said,” Sanders-Funches said. “This is important because words can be greatly effective if used right. So when completing any piece for forensics I make sure it makes sense to have certain words in a program and that they are being used correctly.”

Sanders-Funches has achieved numerous victories and taken home many trophies, but the most rewarding part for him is connecting with the audience.

“I enjoy crafting messages into programs, then performing those programs,” he said. “The performance provides catharsis for me, and allows me to communicate valuable information to my listeners in receptive ways.”

*Forensics is the accepted term for competitive public speaking. The activity involves students performing head-to-head at tournaments in events that include aspects of public address, debate, literary analysis, rhetorical criticism and theatrical performance.