The twists and turns of pursuing different career goals and changing majors resulted in an unanticipated benefit for Brandi Pessman ’19. She achieved a Goldwater Scholarship Honorable Mention that will serve as a perfect entrée for graduate school applications.

The Scholarship Program honoring the late U.S. Senator Barry Goldwater encourages outstanding students to pursue careers in the fields of mathematics, the natural sciences, and engineering. The Goldwater Scholarship is the preeminent undergraduate award of its type in these fields. Of the applicants from across the country, Pessman is among 281 named as Honorable Mentions.

Pessman plans to pursue a doctorate in biology after graduation. She’s been conducting research in animal behavior—specifically, aggression in crickets—with Chandreyee Mitra, assistant professor of biology. Pessman presented her findings on how population density affects aggressive behaviors in male crickets at the National Conference for Undergraduate Research in April and at the College’s own Rall Symposium for Undergraduate Research, Tuesday, May 15. 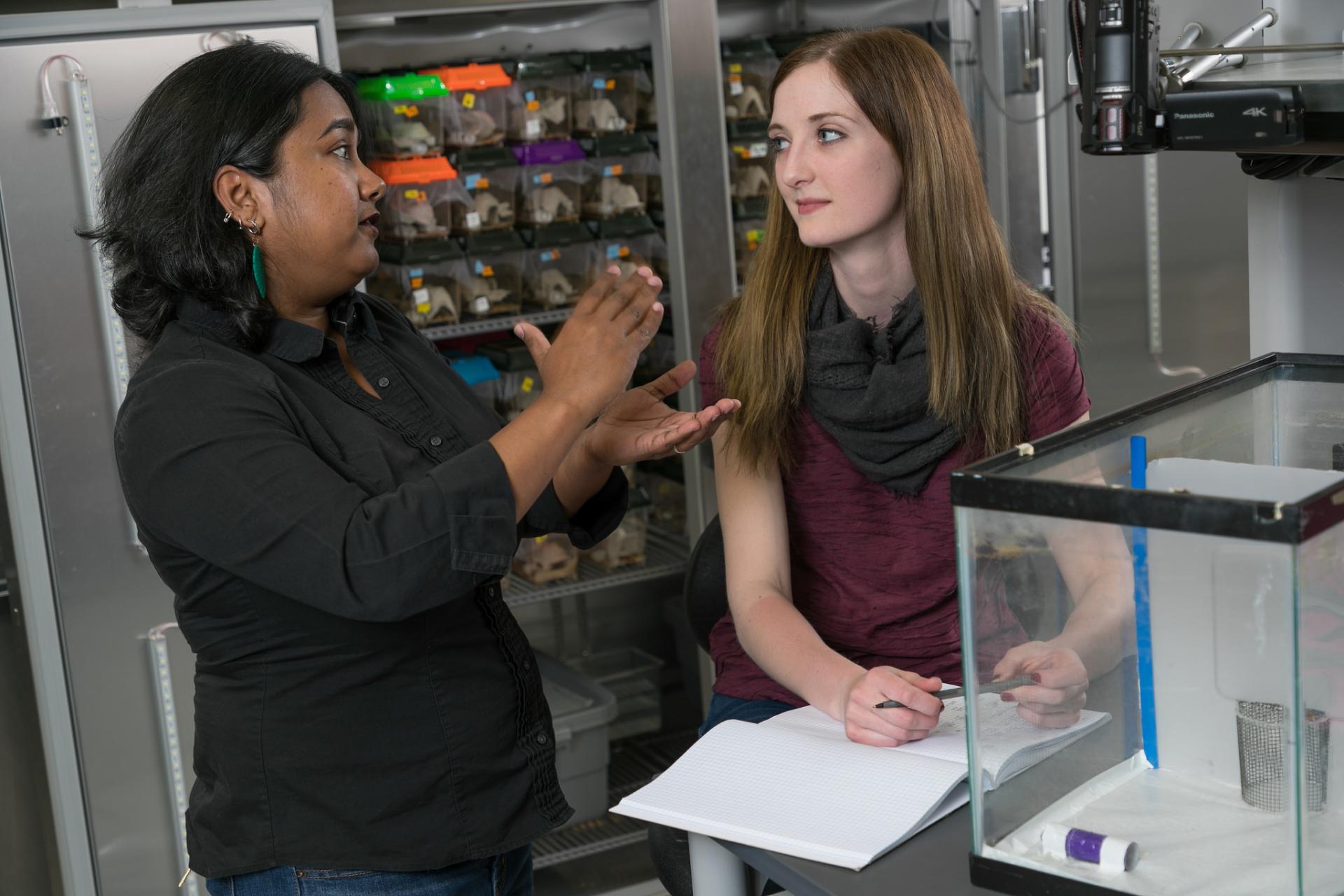 Since last summer, Pessman’s research has been underway in the new animal research laboratory at the Dr. Myron Wentz Science Center. Crickets are hatched in large incubators and then Pessman places them into a glass structure with features she devised to test their aggression.

Pursuing a biology major and advanced degree in the field represent an extreme change of plans for Pessman. She came to North Central College from Fulton, Ill., intending to major in actuarial science. While the mathematics fit her talents, the idea of office work did not. “I’ve lived on a farm all my life and I missed my animals terribly,” she said. “When I took an aptitude test during First-Year Experience (FYE), the results showed I belonged outside with animals.”

It made sense for Pessman to pursue a pre-veterinary program, which requires majoring in a discipline like biology. Mitra invited Pessman to become involved in her research as a first-year student, a testimonial to her academic talents. That experience inspired Pessman to consider pursuing a doctorate and a career in research and teaching. “If someone had told me I’d be eventually pursuing a Ph.D. in biology, I would’ve thought they were insane,” said Pessman, who also minors in chemistry and math.

Pessman’s interest in graduate school inspired her application to the Goldwater program. Pessman also pursued and earned a Research Experience for Undergraduates (REU) position for summer 2018 at Indiana University—her top choice for a doctoral program. There she’ll be studying weakly electric fish, which she admits will be a completely new area of research. (Weakly electric fish use electricity of less than a volt for navigation and communication.)

Her summer plans include attending the Annual Conference of the Animal Behavior Society, studying for the Graduate Record Examination and starting her thesis for the College Scholars program.

“I’d never planned on a science major,” Pessman says. “Now I’m conducting research with different species of crickets and preparing for grad school. None of this was ever in my plans.”