North Central College provides a transformative education committed to a liberal arts tradition while preparing students to be curious and engaged. Summer undergraduate research gives students the chance to touch on all of those areas at once.

Associate Professor of Physics Paul Bloom talks about this dynamic in reference to science specifically. “At least half of why we do what we do is so that students can get a sense of what it’s like to actually ‘do the science,’” said Bloom. “We had our successes this summer—we also broke things, got things wrong, made mistakes and found things we didn’t understand and had to figure out. That’s what doing science is all about.”

More than 35 students collaborated with faculty on internally funded research on campus this summer, with several more doing work off campus. Their projects covered a wide range of academic areas from physical science to education.

The consistent thread among these projects was innovation. Researchers looked at existing questions in new ways, took on tasks that had never been done before and expanded the breadth of the liberal arts by way of collaboration and interdisciplinary efforts.

Bloom worked with students Andrew Bird ’20, Kevin Gruhlke ’20, Jake Harper ’19, Axel Pontén ’20, Darryl Watkins ’20 and Tyler Weiztel ’19 as well as Frank Harwath, professor of engineering and director of engineering programs, on a completely new measurement instrument. Their work was supported in part by a U.S. Department of Energy Visiting Faculty Program grant as well as by North Central. 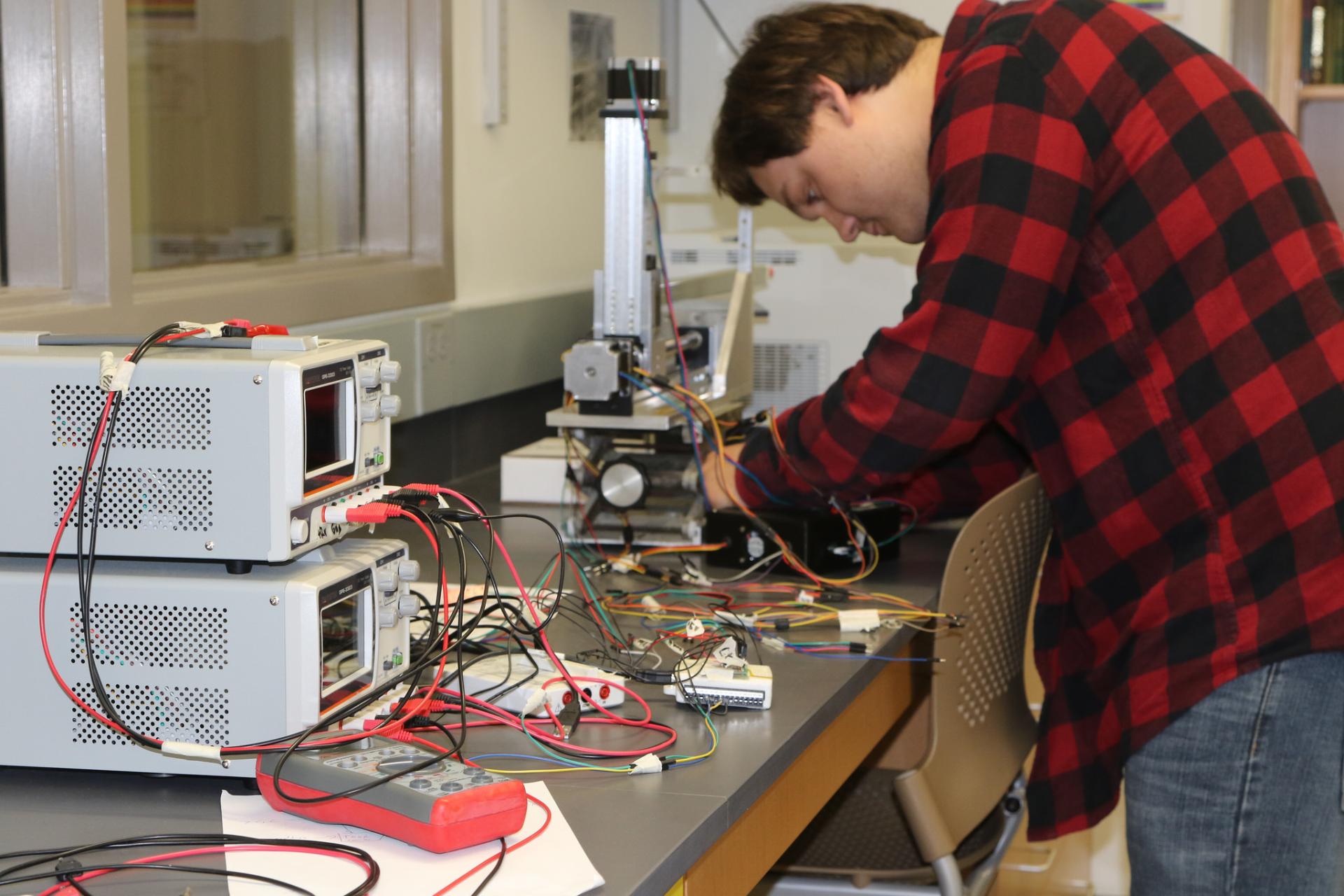 The project is part of the g-2 experiment at Fermilab National Laboratory in Batavia, Ill. Researchers there inject particles called muons into a magnetic storage ring. Detectors track the paths of positrons resulting from the muon decays. Measuring that path with precision requires knowing the strength of the magnetic field where the positrons travel and that has not yet been measured. That’s where North Central students came in.

Bloom and his students conceived of an instrument that could measure magnetic strength at different points in the detector. Harwath designed the device to move in two dimensions and house probes to take measurements. Students then built the device, using 3D printing to construct some of its pieces, and designed electronics and computer programs to record and interpret data.

The instrument is unique and fulfills a vital purpose in the g-2 experiment, enabling a level of precision not previously possible. It is work worthy of accomplished professional scientists.

“Somebody had to do it,” Bloom said. “If we didn’t do it, there would be nobody else to take care of it. For the students it’s not just about just participating in research. They’re really getting their hands dirty.”

Studying science typically doesn’t include creating new measuring tools like this one. The project displays the importance of new programs like engineering in expanding the possibilities of a North Central education.

“I feel more comfortable about taking on instrumentation projects now than I ever have before,” said Bloom. “Having Frank here meant I could really go after this project with an experienced engineer. The best work happens when physicists, engineers and technicians collaborate and listen to each other.”

Research is an important component of a liberal arts education, and usually carries the benefit of academic credit. It takes a particular devotion to forego that benefit in the pursuit of a valued subject.

Allyson Hahn ’20, a mathematics major, approached Associate Professor of Mathematics Neil Nicholson about devising a project that would tackle an engaging problem.

“It’s original collaborative research and we are co-researchers; we’re working as equals in the process rather than as a supervisor and a subordinate.” 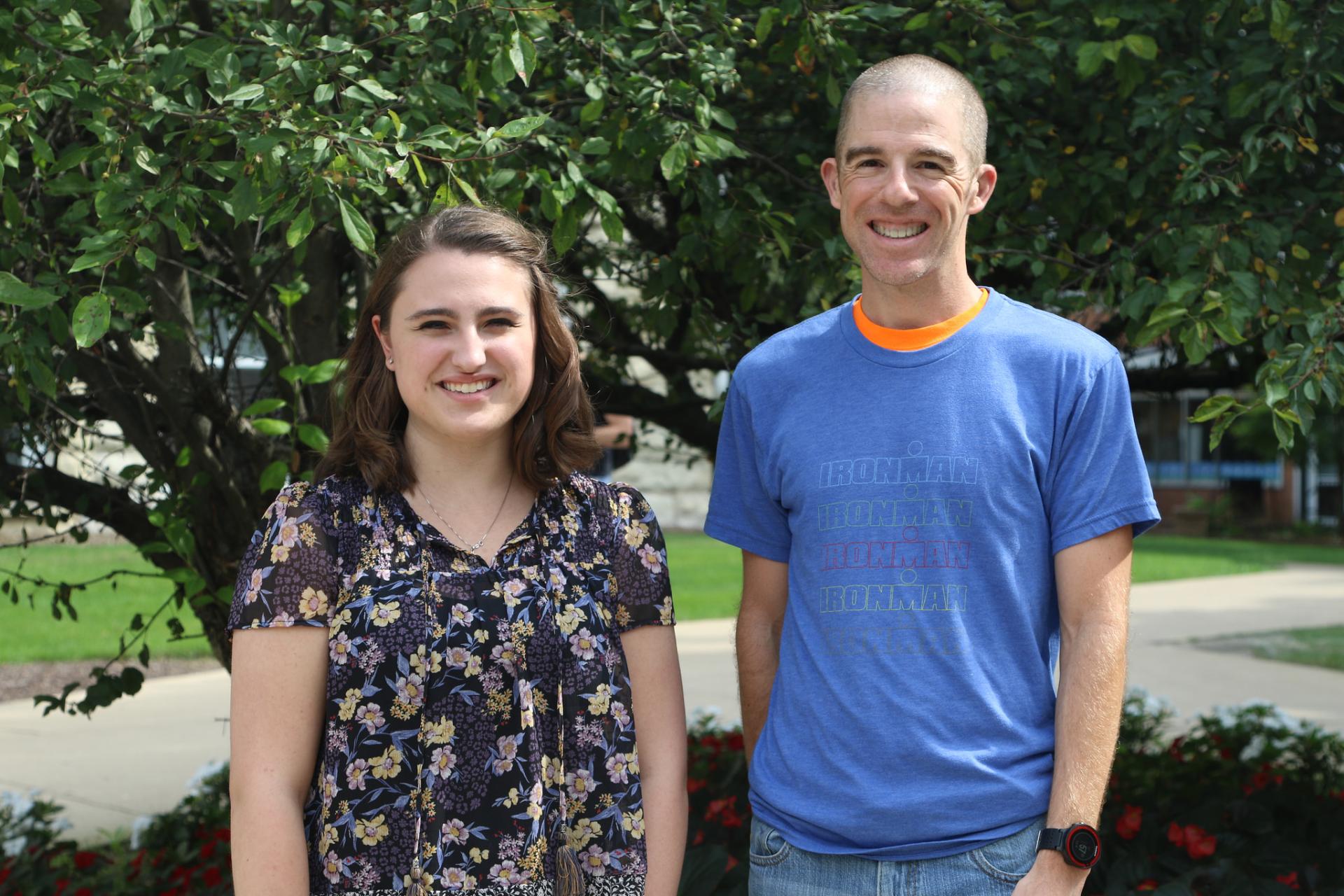 They are working on a new variant of the math game “Cops and Robbers on Graphs,” wherein points on a graph represent multiple police and individual criminals. The object is to devise a strategy where there are enough cops positioned to catch the robber no matter where they go.

“You can vary the game by looking at specific graphs, or by putting restrictions or requirements on the cops and robber,” said Nicholson. “We’re looking at chessboard graphs on a torus (a geometric shape like an inner tube) where the cops move similar to chess pieces, like knights or a queen, while the robber is ‘on foot,’ meaning he can only move ‘one space’ at a time, like a pawn.”

At its best, research goes beyond the curriculum of courses to put learning into action. It also teaches problem-solving in an environment closer to what students encounter after graduation. Ultimately, though, what keeps the research going through all the effort is that it’s fun.

When speaking of his work with her, Nicholson said, “It’s not been for credit or pay but simply the joy of mathematics.”

Newly discovered problems require research to find inventive solutions, but there also needs to be room for examining the everyday from a new perspective. Shruti Amin ’20, a neuroscience major, sought to do so in partnership with her advisor, Assistant Professor of Kinesiology Tammy Wynard.

Their project examined how students are prepared to deal with the effects of Adverse Childhood Experiences (ACEs) in the education and healthcare fields. Books and TED Talks by Dr. Nadine Burke Harris inspired their research, as she has posited a link between ACEs and negative life outcomes. 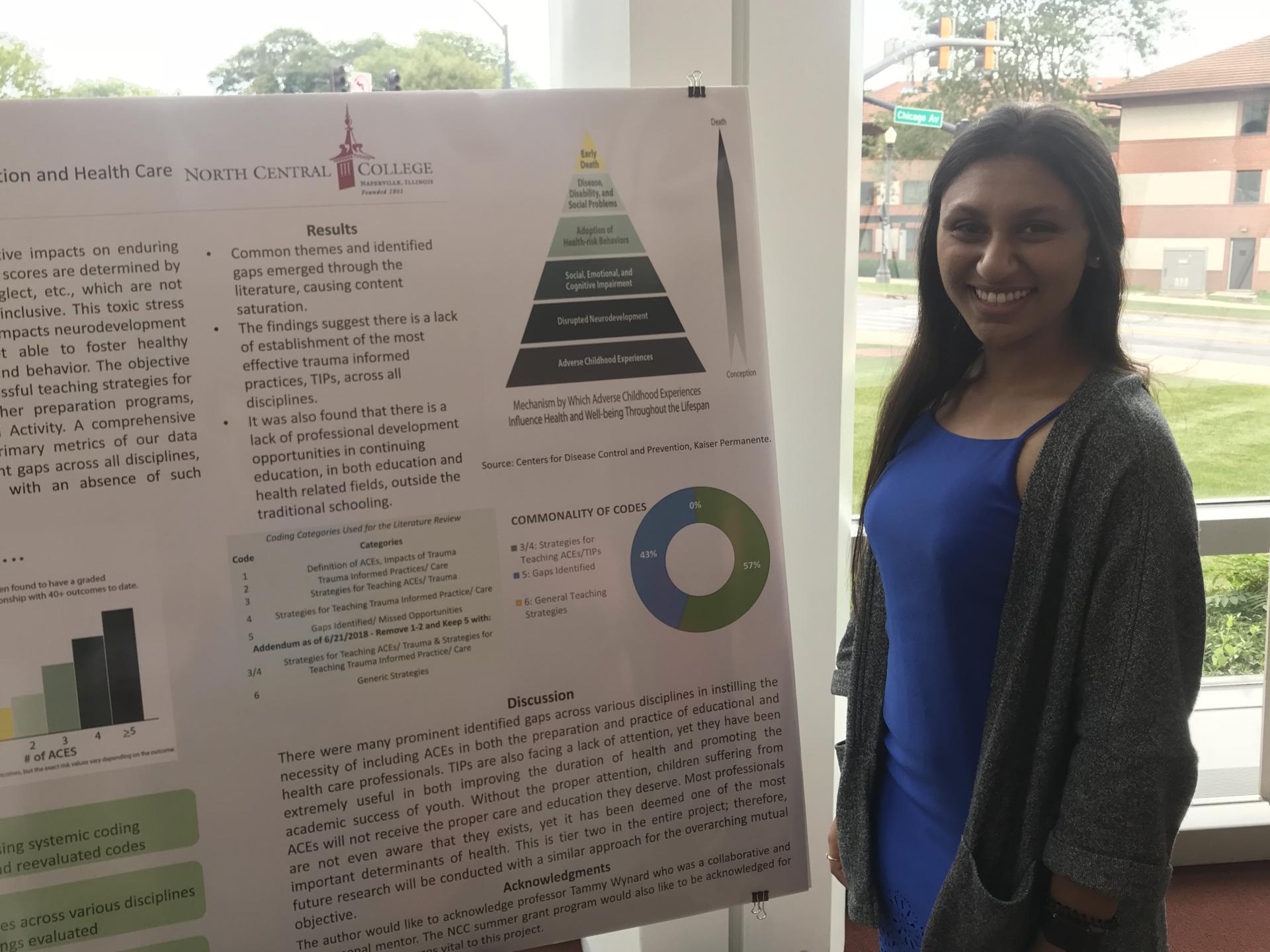 Shruti Amin with a poster on her project.

“Research on ACEs is survey-based,” said Amin. “You take a survey, and the higher your ACE score is, the higher the likelihood that you’re going to have impairments on your neurodevelopment—and they have lasting effects. They range from heart disease to mental illness, to high incarceration rates or even early death.”

Amin and Wynard did an extensive literature review on materials used to educate future teachers and healthcare professionals. They looked for mention of ACEs or trauma-informed practices (TiPs), strategies to account for the effect of ACEs on students or patients.

“We found many gaps in the education and healthcare systems in educating our future professionals in these fields,” Amin said. “We also went through professional development conferences and tried to identify any mentions of toxic stress or ACEs. We didn’t find a lot. Once you’re in the field you can’t even get training on ACEs even though they’re such a new and important topic.”

Like many North Central students, Amin applied the liberal arts to a professional scenario and the result was illuminating. She found the partnership with Professor Wynard beneficial to providing a new approach to research.

“I’ve studied so many ‘hard sciences’ that this was a nice break—to get out of the lab and pursue a subject in the comfort of my own home,” Amin said. “I didn’t realize how prolific I could be at literature review until I realized how much material I had gone through.”