When three men experience the death of a distant relative, their already tenuous relationship is brought to a breaking point as they are forced to come together.

North Central presents “Logan’s Comedy,” a student-written and student-directed show Jan. 24-27 in Meiley-Swallow Hall. A theatre major and stage veteran, Shelby Slager ’19 is directing her first College production, and has learned a lot about performing outside the spotlight.

“My cast has been feeding off of each other and taking feedback really well,” said Slager. “It’s an interesting dynamic to be in charge of your peers in this setting, but they’ve all been very respectful and I think it mirrors the professional theatre scene.”

The eponymous Logan is a semi-successful comedian living at home with his father Terry, who is living on disability. Ron, Logan’s older brother and a blue-collar union worker, rounds out the trio.

Writer Keven Deiber ’19 has found playwriting to be an exhilarating outlet for his creative energy.

“About two years ago I got really excited about writing a play and having it performed,” said Deiber, who is majoring in English studies. “I had never been involved in theatre in any capacity and had only seen maybe five plays in my life, so where this desire came from is sort of a mystery.”

The decision to use an all-male cast comes from Deiber’s desire to put masculinity under the microscope. In the contest of the play, the death of a cousin might have sparked a fire between the trio, but the kindling was already there.

“In many American families there seems to be a lot of unresolved tension between competing men, whether it’s father and son or two brothers,” said Deiber. “This tension erodes relationships and turns people against each other.”

Despite the heavy subject matter, Slager and the cast have been enjoying the process of translating the script to the stage.

“The rehearsals have been a blast, the cast is really digging into the script, and we all learn new things about the characters and the overall production every day,” said Slager. “As the director, I've had the opportunity to learn how to make everyone’s smaller pictures form the big picture.”

Deiber is excited to see his script come to life, and has gained valuable experience through the creative process.

“Having other people read your work and bring it into the world sheds light on its inconsistencies and flaws, but it also helps you see what's working in your text and why,” said Deiber. “A lot of wonderful people read early drafts and gave me their honest thoughts. I’m incredibly grateful for them. A significant part of the writing came out of the discussions I had with others, and it wouldn't be the same piece without that dialogue.”

At the end of this collaborative and creative process, the students in the cast and crew are anticipating that the show will be memorable.

“I hope the audience gets a good laugh out of it all,” said Slager. “Since the play deals with difficult topics including addiction, illness and death, I hope the comedic overtones shine through and take away some of the heaviness surrounding these issues.”

Tickets are $5 for adults and $3 to purchase for students and seniors; call 630-637-SHOW (7469) or visit northcentralcollege.edu/showtix. 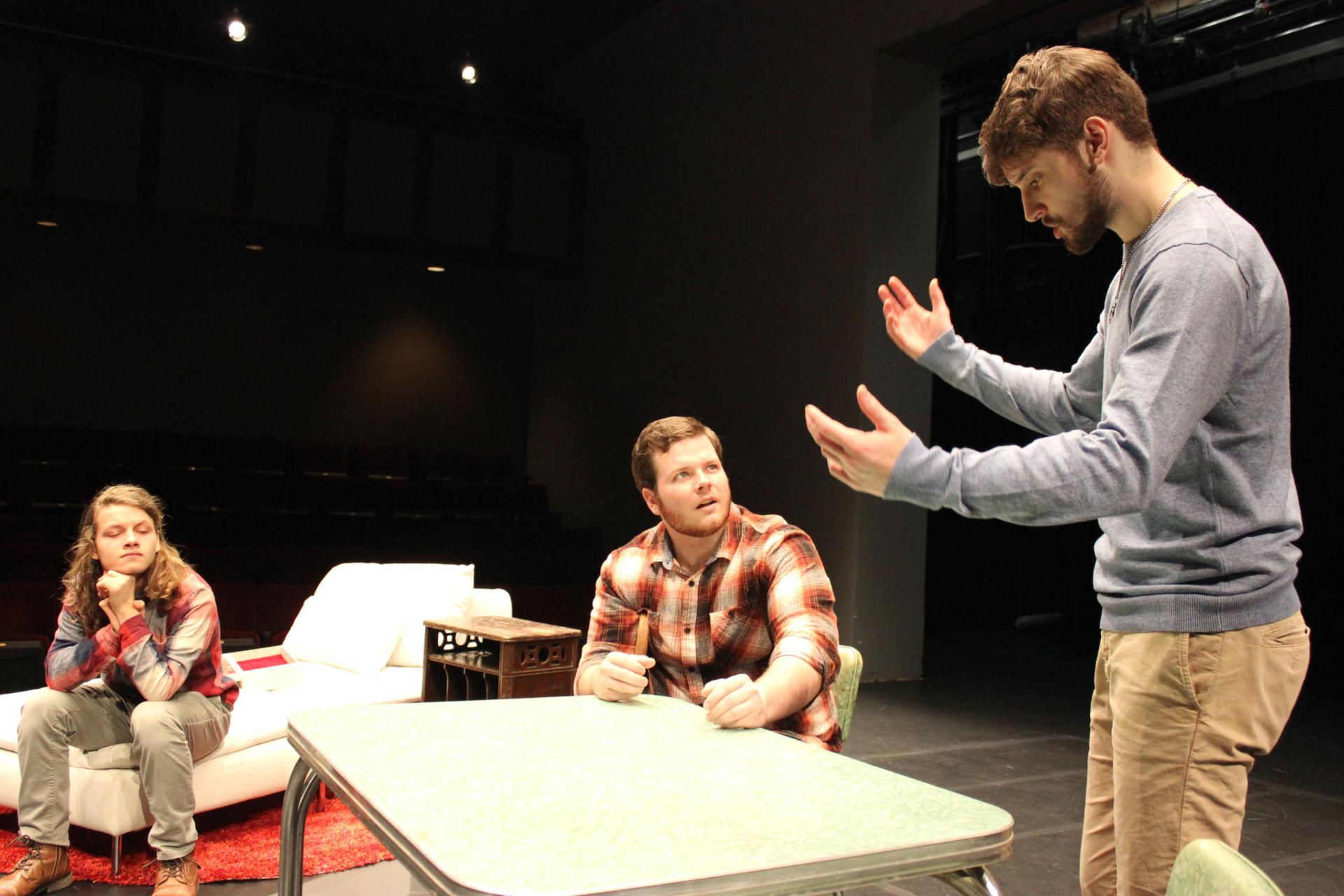 From left to right: Ron, played by Isaac Thornsen '22, Terry, played by Jake Elkins '20, and Logan, played by Dylan Obrochta '21