North Central’s Air Force Reserve Officer Training Corps (AFROTC) cadets have pushed themselves to the head of the class in the national scene. Even with at least a year before graduation, they are gaining the high honors and experiences typically awarded to more seasoned cadets.

Physics major Brady Dickerson ’20 learned he is officially becoming an Air Force pilot. He is one of 623 new pilots across the nation, chosen from a large list of candidates based on qualifications such as grade point average, physical fitness and pilot aptitude.

It’s a great honor that Dickerson’s peers felt he fully deserved. Twenty-five percent of a potential pilot’s eligibility score comes from their ranking among the peers at their AFROTC unit. Dickerson was in the top three of all cadets in this category.

“As you can tell, this is not an automatic process,” said Lt. Col. Michael Aul, commander of Detachment 195 in Chicago, where North Central’s cadets train. “It takes considerable effort on the individual’s behalf.  Brady rises to the occasion each time. North Central’s level of support has been instrumental and set him up for success.” 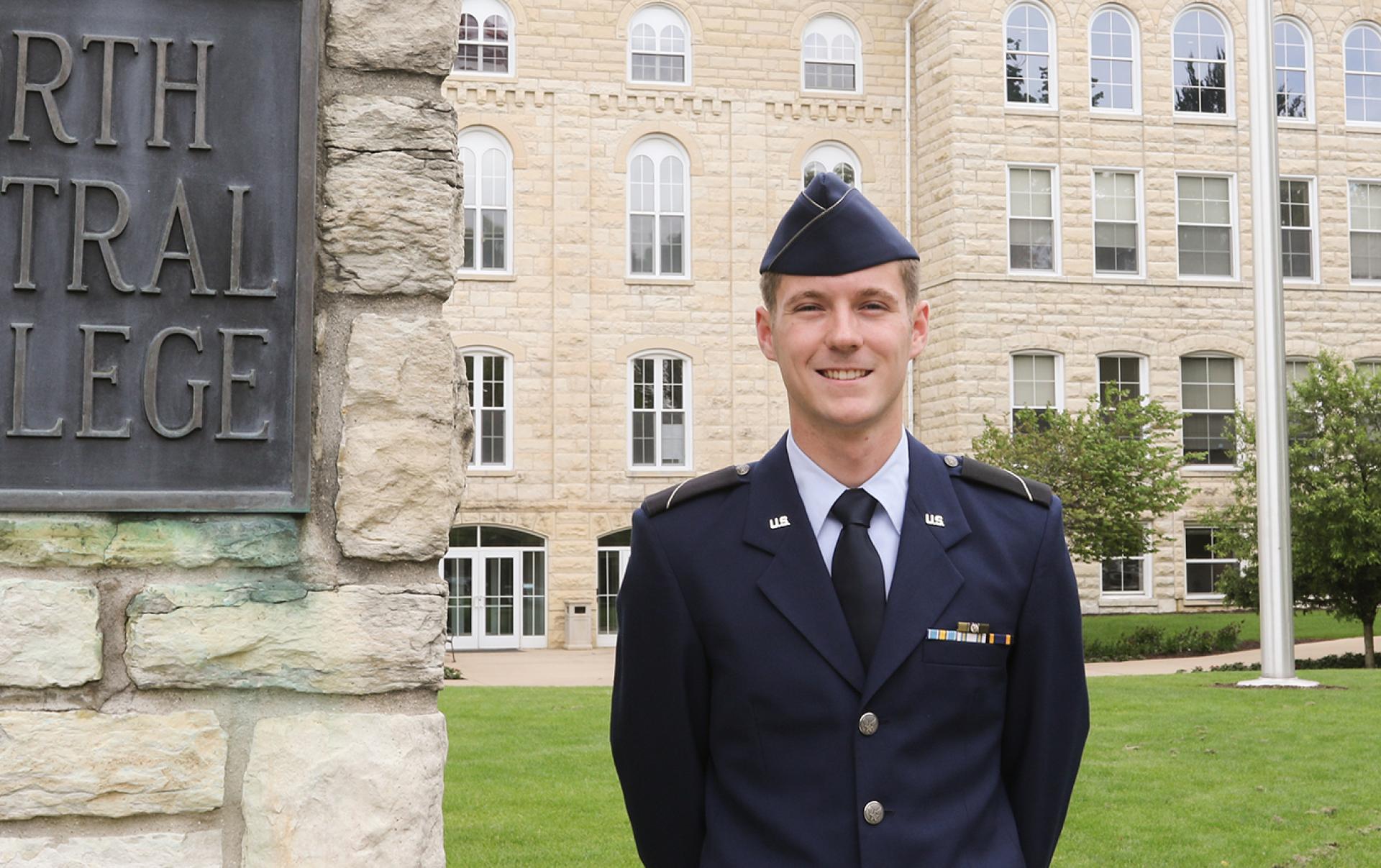 Mechanical engineering major Andrew Bird ’21 is spending his summer getting a feel for genuine Air Force flying without ever starting up an engine. He is one of only 20 cadets selected for the Intro to Soaring (SOAR) program at the U.S. Air Force Academy in Colorado Springs, Colo. This 15-day exercise allows Bird to learn flight fundamentals using non-powered gliders that contain all the instruments you’d expect to find in a jet. SOAR cadets learn everything from doing a complete check of their plane on the ground to getting one in the air and possibly doing a solo flight in a glider.

Bird also earned a highly selective You Can Fly scholarship to work at JW Aviation in Bolingbrook, Ill., which he is using towards his personal pilot’s license. You Can Fly is designed to help get AFROTC cadets into the air as early as possible in their careers, pairing them with certified local flight instructors so they have practice before getting into more complex military flight maneuvers later in their training.

Aul explained that consistent preparation is a key component of You Can Fly. “Cadets must continue to fly on this scholarship and must fly regularly without excessive time periods between training events—four weeks is considered excessive,” he said.

Michael Pollack ’21, a physics major, is spending time at the U.S. Air Force Academy this summer on an Expeditionary Skills Training (EST) program. The EST, which is in addition to usual AFROTC training, will teach Pollack about the extensive tasks involved in Air Force service that happen on the ground, including survival and evasion skills; field medicine and protective measures for dealing with chemical, biological, radiological or nuclear hazards; and leadership over tough terrain and in battle scenarios.

After his EST, Pollack will go on to Moody Air Force Base in Valdosta, Ga., for base operations.

“Cadets have the opportunity to live on an active duty air force base for two weeks and get a real taste for a day in the life of an Air Force officer,” said Pollack. “We spend these two weeks shadowing officers and getting a close look at all functions of the base.”

Pollack will end his summer at Maxwell Air Force Base in Montgomery, Ala., for field training, AFROTC’s version of basic training.

“The accomplishments of Cadets Bird and Pollack are both inspiring and amazing, not just because of their success against strong competition from across the country for each of their program selections, but because of the staggering successes they’ve achieved in such a short time,” said Sterr. “Both cadets have only been with us for one academic year. Again, this speaks to the sheer skill, ability, but most of all, determination that these two cadets have to succeed and to defend our nation.

“North Central College should be extremely proud of the accomplishments of their cadets.”

ROTC and North Central fall in line on student success

Aul spoke further about the sacrifices made willingly by North Central’s cadets and how the College has been a reliable source of support for their success.

“Our North Central cadets must take our courses on the Illinois Institute of Technology (IIT)’s campus in south Chicago over 30 miles away­­­—an hour and a half commute in traffic,” Aul said.

“North Central has supported Brady and his fellow cadets in their pursuit of flying for the Air Force. They, as well as the Air Force, thank North Central’s department of physics, Financial Aid office and Veteran & Military Student Services office for their personal attention to help our cadets along the way.”

North Central College students have the option of participating in Army ROTC or Air Force ROTC and an increasing number of students are choosing to do so. In fall 2019, the College will have a record number of students participating in ROTC—11 Army cadets and seven Air Force cadets. Upon successful completion of the ROTC program and college graduation, the cadets commission as second lieutenants. For more information about those options, visit the North Central ROTC web page.