Assistant Professor of Marketing Carly Drake wants her marketing students to see marketing classes as more than learning how to persuade consumers to part with their money. That is why her Integrated Marketing Communication course is no longer centered on product marketing. During the spring 2021 semester, her students created a campaign encouraging North Central faculty and staff to “Be an Ally” and pledge to support victims of sexual assault.

Students in Drake’s Integrated Marketing Communication course work together as a class to create a multi-faceted campaign. In fall 2020, the class voted to run a campaign to raise sexual assault awareness among their fellow students. The campaign was a success, garnering more than 14,000 impressions and 2,300 engagements on social media channels. Professor Drake decided the message was important enough for faculty to hear as well, so the topic carried over into spring semester.

Maddie Tong ’21 and her group had the initial idea to target faculty and staff with the campaign. She saw the role of faculty as resources for students to be just as vital as awareness. Her group wanted to make sure faculty had the right tools to know how to help and share that information.

“We wanted to find a safe place for (students) on campus to talk and seek help,” said Tong. “Plus, faculty members can make a huge impact on the campus community and the students.”

Kily Egan ’23 shared how the class hoped to emphasize the potential strength of the student-teacher bond in dealing with such a challenging and personal issue as sexual assault.

“A professor-student relationship is often seen as professional, but we also wanted to make it personal,” she said. “Students see and communicate with their professors every single day, making them an ideal candidate in terms of comfort and ease.”

Reaching consumers—or potential allies in this case—where they spend the most time is a key principle of any successful marketing campaign. Egan explained how, leaning on principles learned in their courses, the students analyzed their target audience to find the best way to connect with them.

“With many professors being entirely remote this semester, we had to adjust our campaign to include them,” Egan said. “The materials we utilized were an email, (printed advertisement), video, tip sheet, and public service announcement. We used an online platform to allow professors to pledge to be an ally.

“Email became our main point of contact because we knew … professors … check their email daily to keep in (touch) with their students and the school.” 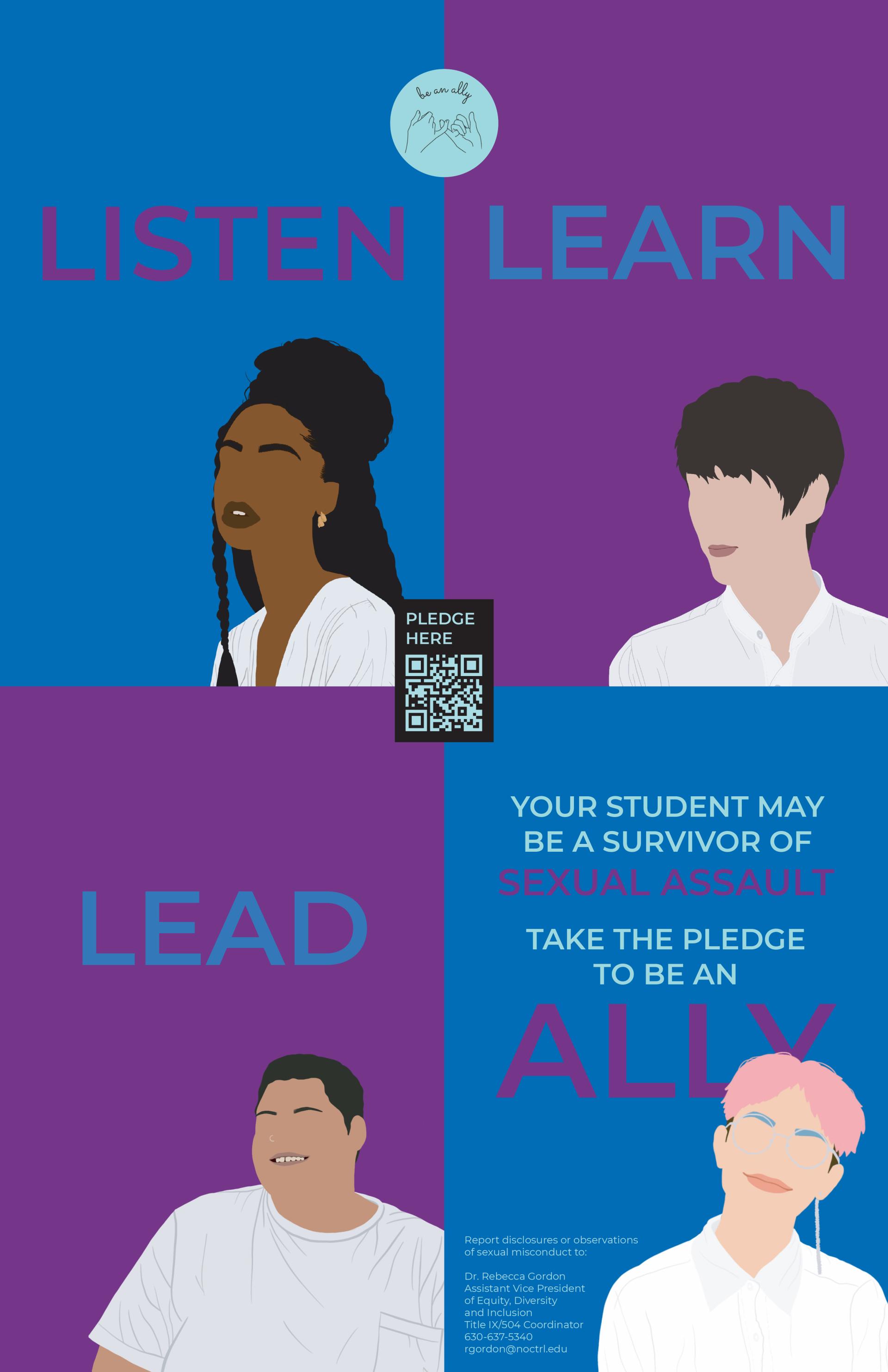 The Be an Ally campaign poster.

Drake and her students received tremendous support from Rebecca Gordon, assistant vice president for equity, diversity, and inclusion and Title IX coordinator for the College. The Title IX office provided funding for the campaign materials, as well.

The class corresponded with faculty, posted information over social media channels, and shared a public service announcement on campus radio station WONC-FM 89.1 during the month of April 2021. The campaign took on even more meaning as April is Sexual Assault Awareness Month. After tracking the initial response, Drake suggested a key change in their methods.

“I initially sent out the campaign materials to faculty, asking them to take the pledge, but … we saw a huge bump in pledges when I assigned a team of students the task of emailing every professor who hadn't yet taken the pledge,” Drake said.

“I had the opportunity to send out personalized emails to some professors,” said Egan. “I explained to them my ‘why’ and what it would mean to me as a student if they took the pledge to be an ally. The response was amazing.”

Along with the large number of pledges, faculty provided beneficial feedback during surveys taken before and after the campaign. Some expressed hesitancy to take the pledge due to wanting more information, which allowed the class to adjust and make amendments to their tip sheet, including guidance from the Title IX office. The survey results will help Drake and her students fine-tune their message in the future. Drake also hopes to add community events to the campaign when COVID restrictions allow.

Those involved in Be an Ally saw it as a success beyond the numerical results.

Drake recognized the impact that working on a social marketing campaign had on her students and how it will benefit them personally and professionally.

“I want my students to be advocates for their discipline, and on a more immediate, practical level, I want them to enter the job market being able to speak to the change that they've enacted in their communities,” Drake said.

“Student reflections showed that they were happy to be working on a hands-on, real-life project that had implications beyond a grade,” Drake added. “They were also happy to be learning about an issue that was previously on their minds, but that they may not have had a lot of background information on.”

Tong shared her hope that both student campaigns result in an ongoing conversation, because the issue of sexual assault is too important not to discuss.

“I hope people will be more aware of sexual assault and talk about it more because it does happen,” she said. “As a community, we need to normalize talking about it and making people aware.”

Egan reflected on the experience as not only an opportunity to practice the very skills vital to a career in marketing, but a symbol of the power of the North Central community.

“This was an incredible and rare experience to have as a sophomore in college,” she said. “It made me realize how much I love marketing, and how so many people can work together to create something amazing.

“Especially during this time of a pandemic, it can feel like everyone is out of touch. This campaign brought professors and students back together with a new kind of connection. Being a part of this campaign made me proud to be a student here where I not only am cared for but can be a direct influence on my professors the same way they are for me.”

North Central faculty and staff who want to take the pledge should look for more information around Be an Ally in fall 2021 or contact Professor Carly Drake. 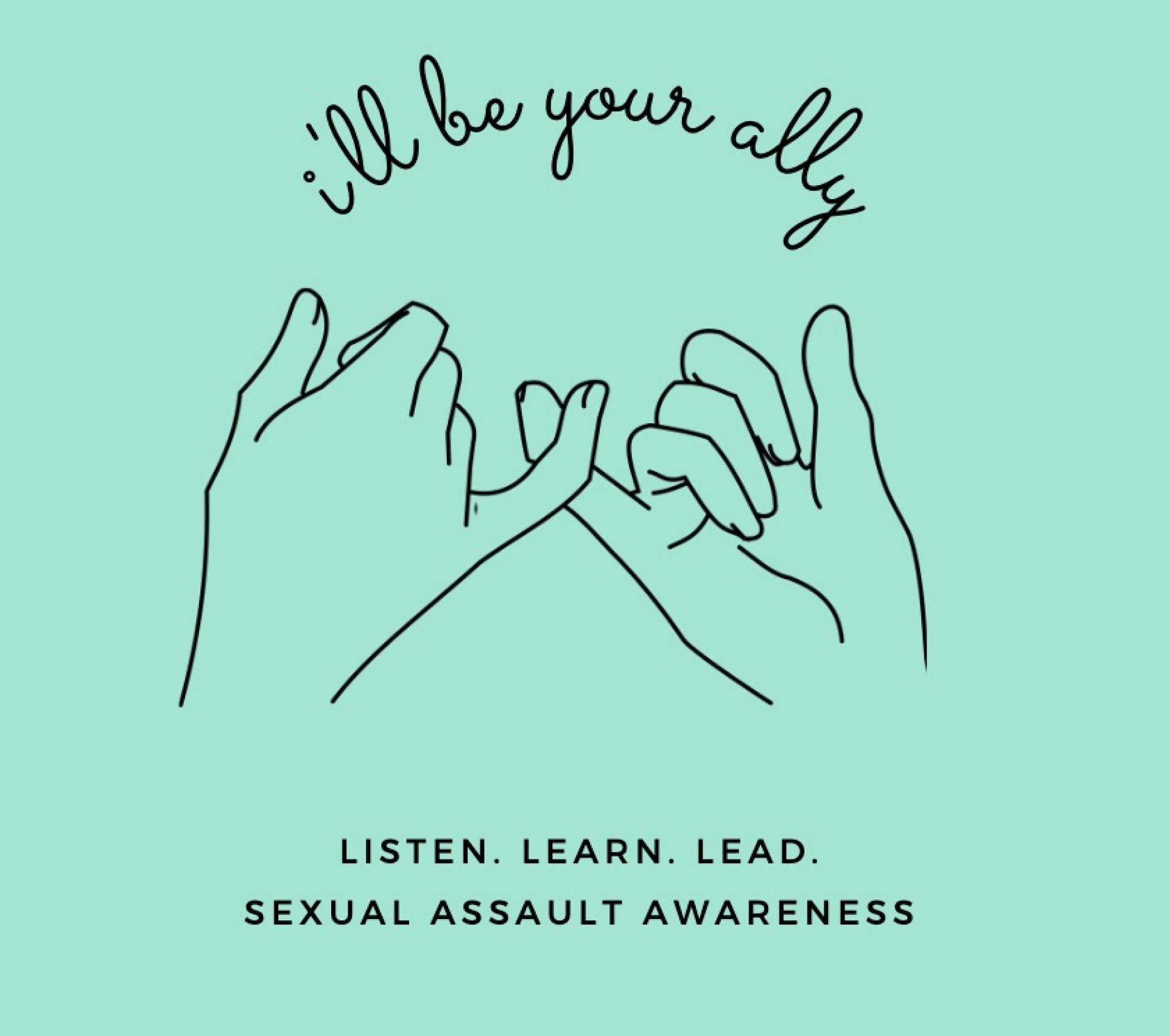 The Be an Ally campaign sticker.