Daniel Persinger ’21, fire chaplain: “I have something to give”

As a youngster, Daniel Persinger ’21 was very confident about his future. After watching reruns of the show “Emergency,” enjoying a birthday party at a fire station, and, later, participating in Boy Scout experiences with the Rockford (Ill.) Fire Department, he knew he was destined become a firefighter.

Then his plan was derailed by his health. “I was diagnosed with muscular dystrophy on July 5, 2012,” he explained. “The doctor said, ‘You can’t be a firefighter’ and that squashed my dreams.”

Persinger knew in his heart that “I have something to give.” As he searched for a new career path, he learned about the chaplains who serve fire departments. “My plans exploded from there,” he said. “I had grown up in the United Methodist Church and wanted to find a way to help people.”

Six years ago Persinger began shadowing a fire chaplain in Machesney Park, Ill., near his hometown of Rockford. He witnessed how first responders must handle a variety of emergency calls. “Being present with (first responders) is the most important thing,” he explained. “If people know you, they’ll feel comfortable talking to you when the need arises.”

Persinger then became a “volunteer” chaplain for the Rockford, New Milford and Blackhawk fire departments. Chaplains must apply for their positions, which require 24/7 availability for a small stipend. “You have to know the culture … and reassure [firefighters] that it’s okay not be okay and to take time off if necessary. Their mentality is that 'I’ll be just fine.’”

Along the way he also gained experience as a volunteer chaplain at Mercy Health in Rockford up until the start of pandemic. There he completed a course called Clinical Pastoral Education. “I loved it,” he added.

After Persinger finished an associate of arts degree from Rock Valley College, he wanted to major in religious studies to earn a four-year degree. On his visit to North Central College, he met Perry Hamalis, professor of religious studies, and immediately found a mentor and friend. “I took a class from him every semester,” added Persinger. “My favorite was Death and Dying. I’ve witnessed death (in my chaplain role) and it’s vital to talk about it.” He wrote his senior capstone paper on suicide.

As a North Central student, Persinger was active with Focus and helped build a new organization, NCC Dream. The group encourages students who have a disability to gather and support each other and helps students, faculty and staff better understand the disability community.

Now Persinger is determining his future career, perhaps as a counselor or a funeral home director. “As I’ve dealt with MD, I always think, ‘How can I fit into the world and be a light to someone else?’” 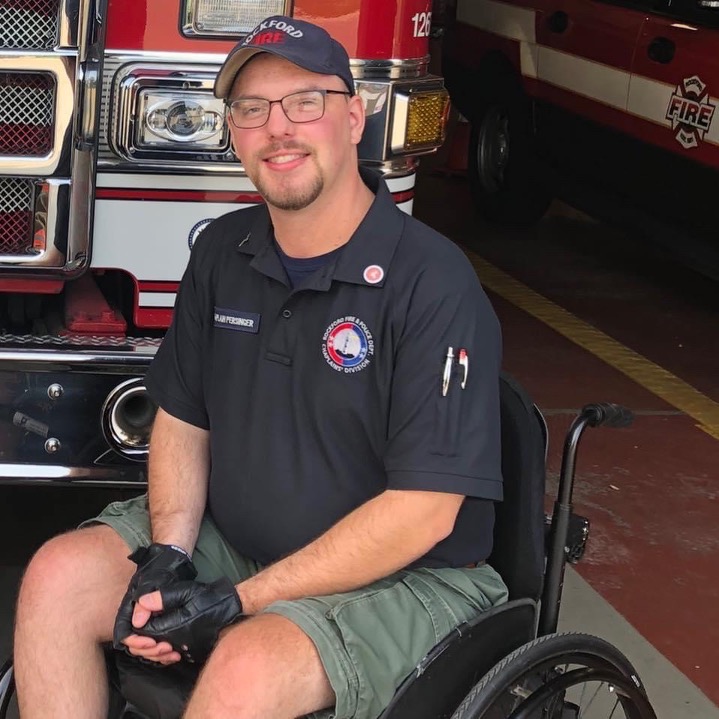