Animation is everywhere: multiple motion pictures from all the major studios; streaming service content; YouTube and social media platforms; and sophisticated stories in video games, which often play out like interactive animated movies.

There was a time, though, when animation was restricted to one particular time and place: Saturday morning cartoons. Chase Rebecca ’19 is just barely old enough to remember this time, as he grew up more in the waning days of cartoons airing weekday afternoons on cable TV. That era made a big impression on him, inspiring his own ideas to add to the wacky, fantastic stories he saw on television.

Since he graduated from North Central, he’s made that goal happen.

Rebecca is a character set up artist for NewScape Studios, an emerging company in the growing world of animated content. As is common in animation, Rebecca has already worked in several places even in a young career. His biggest break was with Bento Box Entertainment, developing the Netflix series “Saturday Morning All-Star Hits” or SMASH.

SMASH is the brainchild of Saturday Night Live writer and cast member Kyle Mooney, who created and also stars in the series. A live action story that satirizes the height of Saturday morning children’s television, SMASH includes animated clips that parody the cartoons kids loved in the ‘80s and ‘90s. That’s where Rebecca came in.

His work on SMASH, which primarily involved hand-drawn animation, helped Rebecca get onboard with NewScape and into his preferred role doing set up art for digital animation. If animation is about bringing the impression of life to static images, Rebecca’s job is to compose those images as lifelike as possible.

“Character set up artists create models of characters for use in cartoons and video games,” he said. “It's sort of like building a digital puppet. My workday is spent taking artwork from designers and figuring out how to break it up into moveable, poseable parts.” 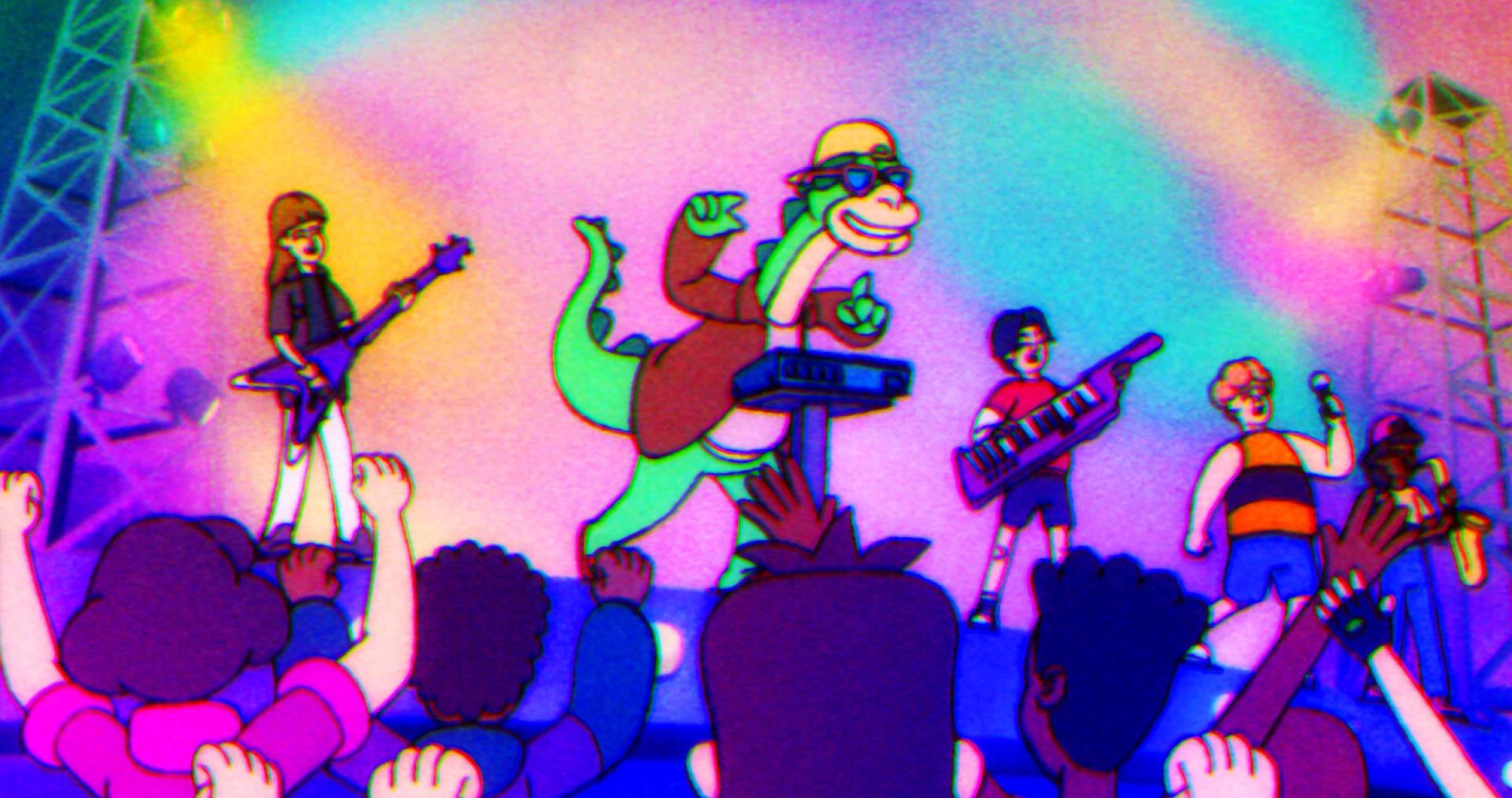 An image from Netflix's SMASH, worked on by Chase Rebecca.

Creating “puppets” that can be manipulated to resemble movement relates closely to Rebecca’s beginnings in animation. “Growing up I would make stop-motion videos on the family camera, starring Play-Doh people and LEGO figures,” Rebecca said. He cultivated his interest at summer camps which taught digital and stop-motion animation. He decided to study film at North Central and settled on interactive media studies as his major with a concentration in interactive technology.

Rebecca studied animation in a way that opened the door to making his hobby into his vocation. “(Associate Professor of Art and Design Kevin) Valentine's animation classes were always the highlight of my day,” Rebecca said. “In his classes I learned just how enthusiastic about animation I really was.”

Animation is a competitive and challenging field. Those who succeed often create their own opportunities, as Rebecca did when he researched NewScape and reached out to see if there was a place for him at the upstart company. Those opportunities have been even tougher to generate in the few years since Rebecca graduated, as the COVID-19 pandemic has forced him and many other animators to make their homes into their studios. “My professional career so far has been completely remote,” he said.

The one surefire key to success in the animation industry is constantly working to improve so you can stand out when you pursue jobs. Animation companies don’t impress easily.

“There are many different jobs in the animation industry that require many different skills,” said Rebecca. “To find success as a professional animator you need to have an impressive portfolio that not only shows that you enjoy creating art, but that you also possess the skills to do so.”

Thankfully, Rebecca has no shortage of sources to go to for inspiration. His love for ‘90s cartoon staples from the Cartoon Network like "Dexter's Laboratory", “The Powerpuff Girls", "Grim & Evil”, and his favorite, "Ed, Edd, ‘n’ Eddy", made him a great fit for working on a show full of loving homages like SMASH. He also thoroughly enjoys more modern classics geared toward older audiences.

How does he keep coming up with ideas? Rebecca says the key for him is to seek to be different. “Many animated shows have their own unique style, like the yellow coloring in ‘The Simpsons’ or the scribbly-ness of ‘Rick & Morty,’” he said.  “A lot of times when I'm trying to come up with new characters, I'll try thinking of a unique stylistic choice that I can apply to many different-looking characters.”