A brief history of LGBTQIA+ organizations on campus

In recognition of Pride Month, North Central College is celebrating the history of LGBTQIA+ (lesbian/gay/bisexual/transgender/queer/intersex/asexual) organizations on campus and their impact. Through this history, the College has worked to promote understanding and awareness and spark important conversations. The College plans to update this article with ongoing references to the work that has been done and the work that continues today on campus in support of the LGBTQIA+ community.

North Central College’s Gay and Lesbian Students and Staff (NCC/GLS) was formed in 1992 by a student who had experienced hardship due to his sexuality. In 1994, NCC/GLS became an official organization on campus that was open to all students, faculty and staff from the LGBTQIA+ community or anyone interested in showing their support. As a new group, members aimed to leave a lasting, positive impact as advocates on campus. In 1995, the group’s name changed to Impact but still had the same goal: to be a voice of knowledge on campus. It was the group’s mission to spread awareness about the LGBTQIA+ movement and provide a supportive network for students.

Impact became more well-known on campus after it sponsored “National Coming Out Day” on October 11, 1996. The group wrote educational slogans on campus walkways to spread awareness and highlight the importance of the day. In 2000, Impact developed Safe Zone, a program for its members and those in the community seeking educated allies. Now known as Cardinal Safe Zone, the program continues to promote a safe and supportive campus for the LGBTQIA+ community. According to Ryan Conley ’02, Impact’s president at the time, the program addressed questions and concerns about coming out and harassment. The program’s allies received pink, triangular stickers stating “Safe Zone” to signify their commitment and support. Allies also attended informational meetings to learn more about the responsibility of having and displaying the sticker. The group ensured that all Safe Zone members knew of LGBTQIA+ issues and the various resources available on campus.

In 2002, Impact’s name changed to Alliance, which eventually became the Gay-Straight Alliance (GSA). True to its new name, GSA continued to encourage understanding and acceptance for the LGBTQIA+ movement. Throughout its years on campus, GSA hosted several events, such as an annual Rainbow Potluck fundraiser and Coming Out Ball. The group also participated in the College’s Anti-Hate Week and sponsored members to attend Reeling: The LGBTQIA+ International Film Festival in Chicago.

Additionally, GSA worked with other organizations and programs on campus to make a further impact. On May 4, 2005, GSA and the College’s Gender and Women’s Studies program co-hosted an event entitled “Leave No Family Behind,” a community-based discussion on equal access to the benefits extended to married couples and the everyday obstacles faced by LGBTQIA+ families. The event began with a panel discussion that featured a child care worker from Hephzibah Children’s Association in Oak Park, Ill., a minister from the American Baptist Churches of Metropolitan Chicago, a representative from the American Civil Liberties Union, among others. The event gathered numerous students, faculty and staff alike, as well as members from the Naperville community.

Between 2005 and 2009, the organization became widely recognized on campus, growing steadily from less than 10 members to more than 60. In a 2009 issue of the Chronicle, Nicole Schiesser ’10, GSA’s president at the time, stated, “When the group first started, the tolerance level of students on campus was very little. GSA members used to have meetings at their advisors’ houses or in downtown Naperville because they feared retribution if people found out they were members of GSA.” As GSA continued to grow, the group hosted two of its largest annual events: The Day of Silence and Night of Noise. 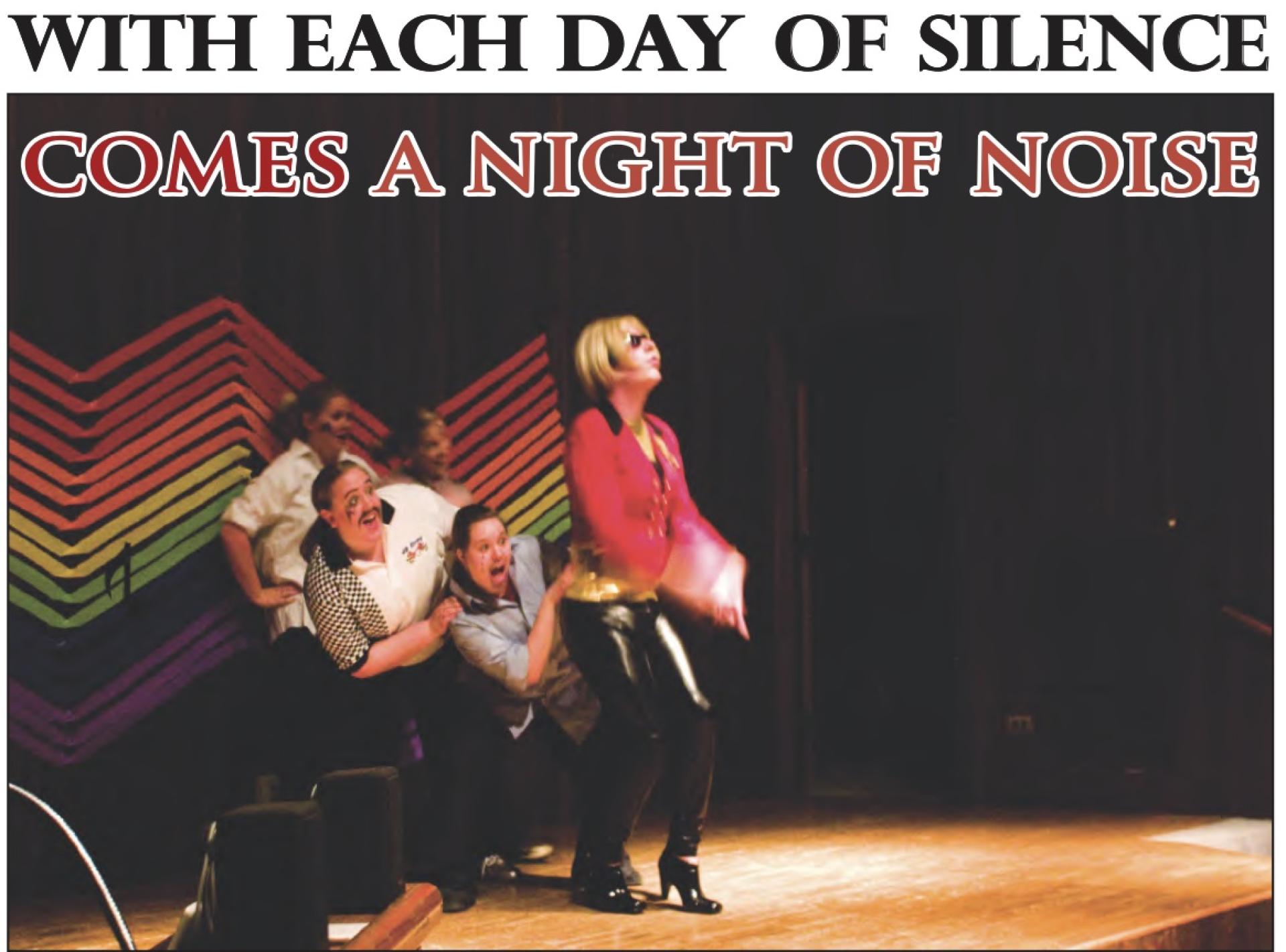 Promotional photo for the Night of Noise.

The national student-led demonstration Day of Silence began in 1996. For the entire day, LGBTQIA+ students and allies would take a vow of silence to protest the harmful effects of harassment and discrimination of the LGBTQIA+ community in schools. In 2009, the Day of Silence at North Central College drew high participation among the student population, a testament to how far the organization has come since its inception. Following Day of Silence, GSA would celebrate with its Night of Noise event, ending the day on an optimistic note. As an event open to all campus community members, the day held a special meaning to both the LGBTQIA+ community and allies.

Today, NCC OUTreach provides a safe space for the College’s LGBTQIA+ community and allies. Using campus tools and resources, it aims to build on the crucial work and progress made over the years to shape a more inclusive campus by using the tools and resources available at the College to promote understanding and awareness of issues the community faces. Equipped with a similar mission, North Central’s Cardinal Safe Zone programs aim to promote a safe and supportive campus environment for students, faculty and staff who identify as LGBTQIA+ and to create a network of informed allies by hosting Safe Zone training sessions through the academic year. In collaboration with the Cardinal Safe Zone program and Office of Multicultural Affairs, OUTreach hosts frequent meetings and events during the year and co-hosts Pride Month throughout April on campus. This year’s Pride Month events included a Pride Booth, Chalk the Spine, Queer Art Exhibit and Day of Silence.

To learn more about OUTreach, visit their web page. For more information on the history of the College’s student organizations affiliated with the LGBTQIA+ movement, visit North Central College’s Archives. 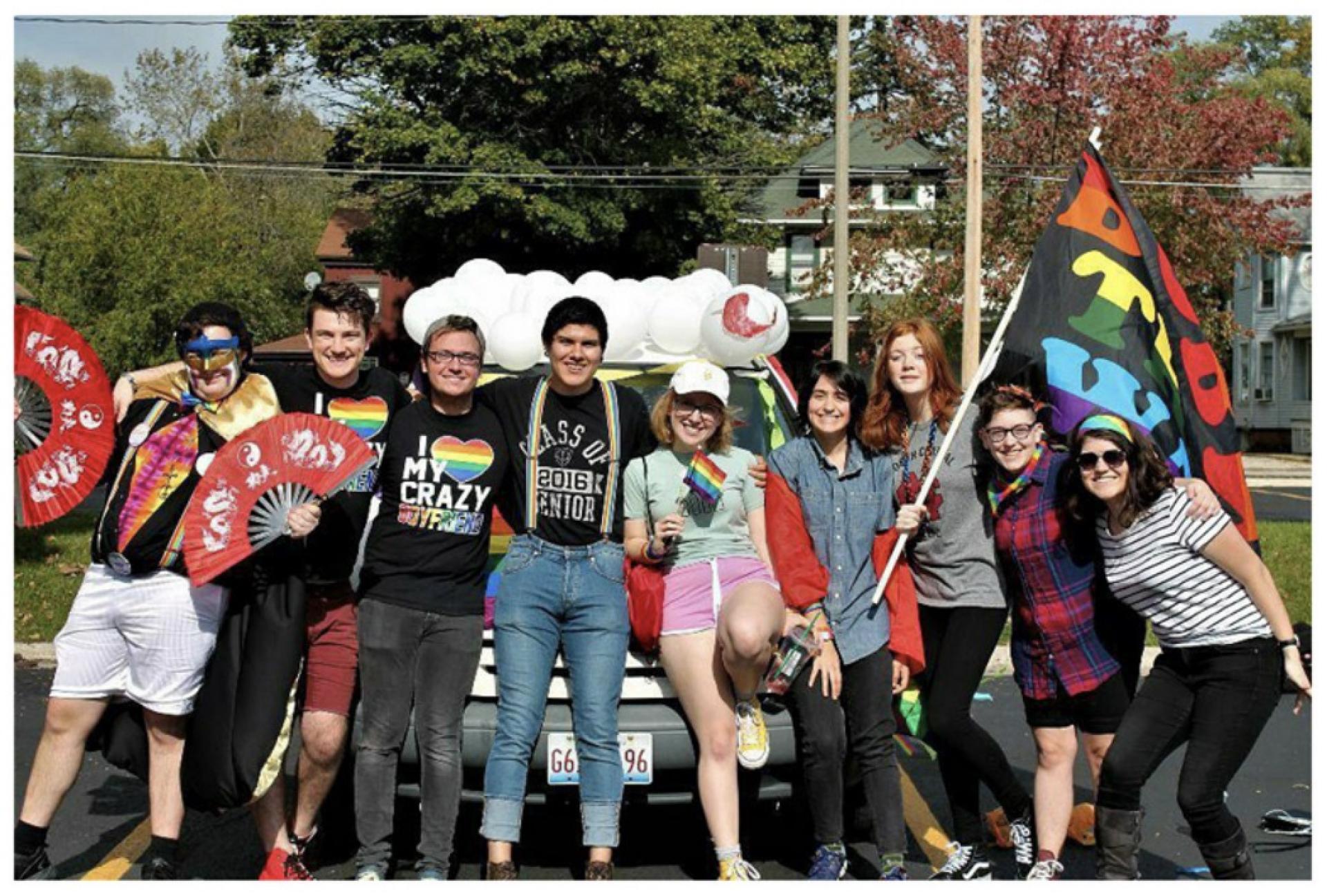