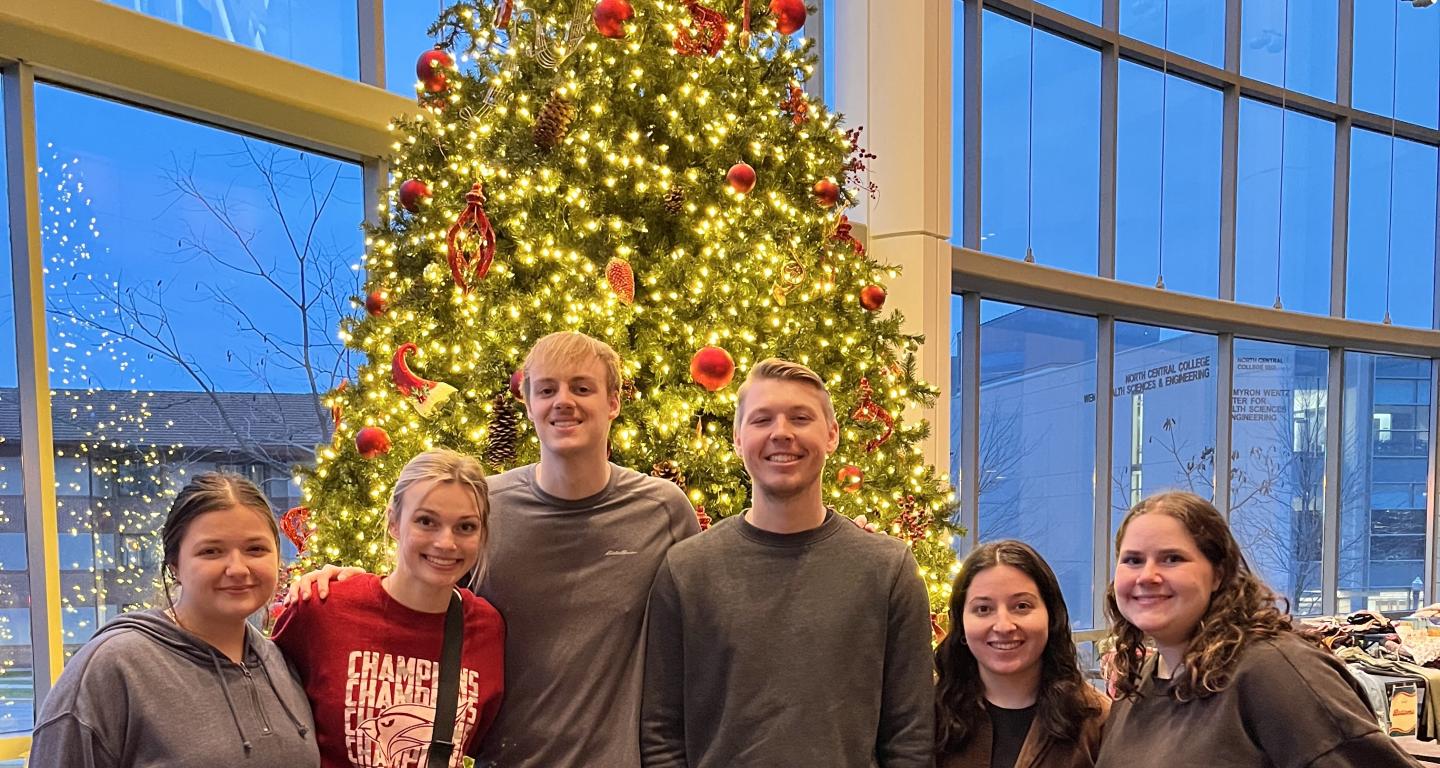 A Season of Giving at North Central

During the holiday season, we are called to pause and take time to support others just as we remember those who have made an impact on us, whether that’s family, loved ones, or a neighbor in a community. As this year drew to a close with another about to begin, the North Central College family showed thanks and support for its students and the Naperville community.

Support for Students in Need

The North Central community has numerous programs to support students’ wellbeing, and one of the most impactful is Cardinal Operation Hope and Help (COHH). Recognizing that some students face obstacles that affect their financial and personal wellbeing, COHH exists to help mitigate some of these concerns. The program addresses students’ needs for food, shelter, transportation, and educational supplies during difficult financial times.

COHH is able to help students in need through the generosity of the College community, alumni, and local donors. One of COHH’s initiatives includes emergency financial assistance for basic needs. Over the 2021-22 academic year, COHH provided $53,000 toward the 128 financial assistance applications they received. Additionally, COHH supports students by providing essentials. COHH distributes Giving Boxes which include food, toiletry items and even cold weather gear in locations across campus.

The support does not end with the close of the academic year, however. COHH also arranges meals for students over breaks. Sponsored by the Office of Student Affairs, COHH distributed pre-packaged meals for students who stayed on campus during the Thanksgiving break.

During winter break, COHH is partnering with Loaves & Fishes Community Services, a local organization which provides food and monetary support to those in need in the Naperville community. As the campus is closed over the break, Loaves & Fishes will supply weekly food delivery and pickup for students.

The North Central family values its students and appreciates that initiatives like these are made possible through the support of the community, including those directly connected to the College as well as our neighbors in Naperville.

Clothing Drive Creates Opportunity for Marketing—with a Cause

The philanthropic feeling is reflected in the work of North Central’s students as well. Throughout the fall semester, Assistant Professor of Marketing Carly Drake’s students (pictured above) worked to host a clothing drive to benefit local teens.

According to Drake, the “students were really concerned about low-income teens who, during the winter months, may not have what they need to enjoy the season comfortably.” The students called upon the Cardinal community for donations of clothing items, which they used to stock You Thrift, a free “shopping” experience for local teens.

With the support of their professor, the students reached out to their target audience by creating engaging advertisements, including this short video. The students also designed the event setting, which took place in the Wentz Concert Hall Lobby on the evening of December 12. The students were responsible for planning the location, food and music to make the event fun for teens.

As Drake commented, the students used the same marketing techniques they’d learned in class for the good of the community. “I was touched to see my students come together to support people they don’t even know,” said Drake. “They had fun working as a team … to do something they may not have been able to do individually.”

Their teamwork paid off and the evening event was a success—65 people visited You Thrift. Even with the large turnout, the students had plenty of donations to stock their “store.” The class collected enough clothing to fill an entire office, as Drake’s students proudly reported.

The excitement over the event was “palatable,” Drake remarked, and was “shared by both the attendees and us hosts—we all saw it as a fun, carefree event and it gave us all a boost to welcome people onto campus for something that may have made their day a little brighter.” 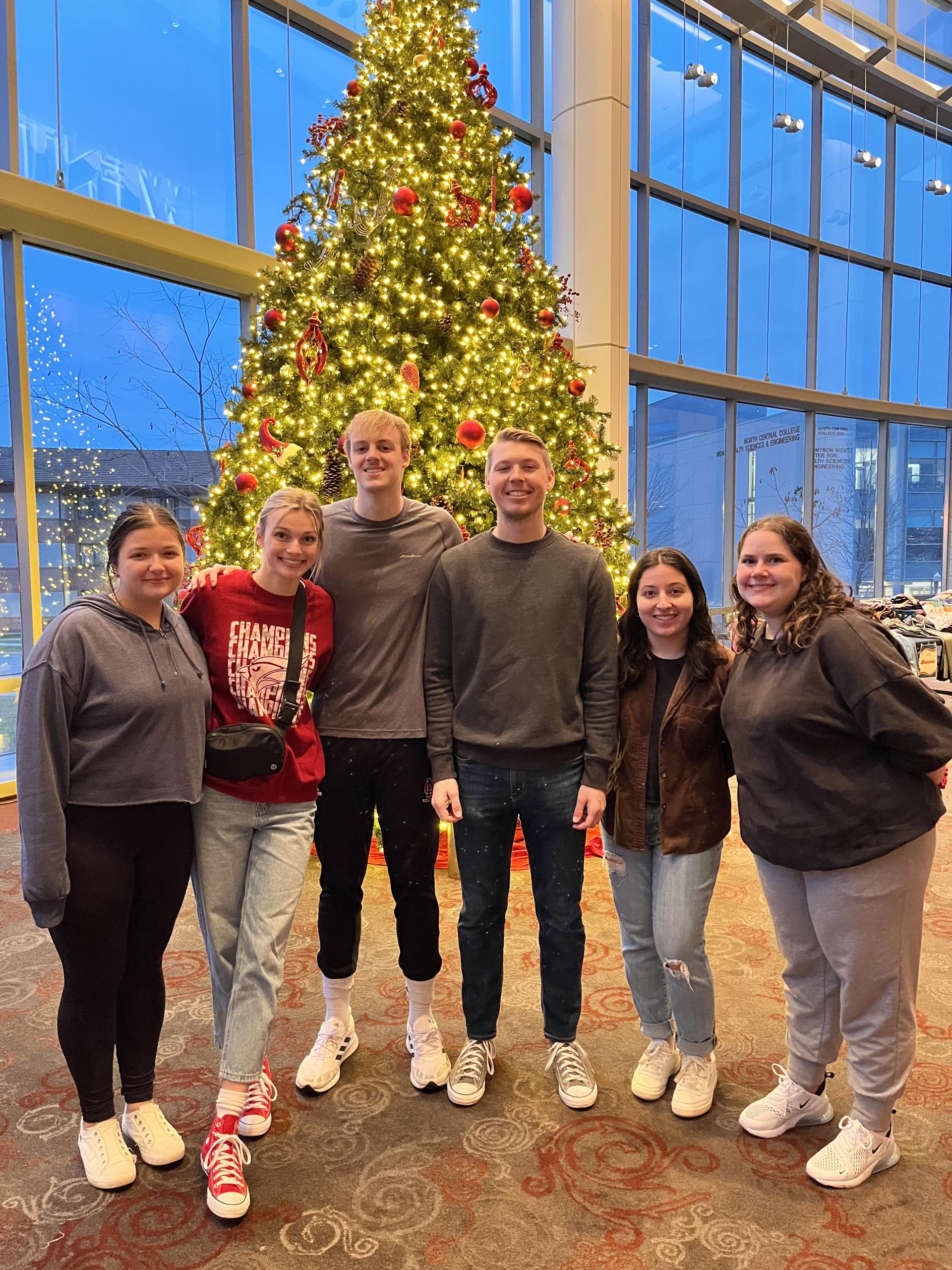 Carly Drake's marketing students in front of the Christmas tree during their clothing drive.

A Food Drive that Really Rocked

North Central students hosted yet another donation drive this fall—this one, a food drive held by the students who operate WONC-FM, the College's radio station. Across campus, WONC collected food and toiletry items to give to Loaves & Fishes in support of those in the Naperville community who are experiencing food insecurity.

According to General Manager Zach DeWitz, WONC chose to work with an organization local to North Central’s listening area and the campus as part of the radio station’s mission to benefit the community. For the students at WONC, DeWitz emphasized the importance of service. “While radio is fun and [students] get to enjoy listening to music and talking about their interests, there’s an element of service … they should all be involved in and take to heart.”

WONC set a goal to collect 300 pounds of food and toiletry items for Loaves & Fishes. They far surpassed that goal, gathering 448 pounds’ worth. As DeWitz noted, the drive’s success was due to the generosity of the Cardinal family. “It really shows that when someone in need asks for help, the campus community is willing to immediately step up,” he said.

The food drive is emblematic of North Central’s connection to the community. Part of the College since 1968, WONC considers Naperville home. “Even though WONC’s reach is much farther than Naperville … the radio station is part of the fabric of Naperville as much as anything else,” said DeWitz. “Connecting to the Naperville community and showing them that we’re invested in being part of their lives is what will keep us successful as a radio station.”

Even though giving is closely tied with holiday season, North Central also looks ahead to a new year of continuing generosity. WONC expects to run this food drive at least once a year, and they have a similar donation event planned for the spring, according to DeWitz.

Drake has plans for next semester’s students to host a thrifting event for North Central students. Next time, she wants to involve local businesses in gathering clothing donations. “I was really touched by how enthusiastic people were about this event, so I want to get as many interested parties involved as possible,” said Drake.

Recently, the College launched a new fund to support students in need of emergency funding for tuition. Similar to the aid COHH provides for students’ basic living needs, the Student Persistence Fund was created to address tuition needs for students facing a crisis or emergency financial situation. This fund, administered through the Office of Financial Aid, is another way that North Central ensures support for every member of the Cardinal community.

For more information about these giving opportunities, please see the following:

To give to Naperville Loaves & Fishes, visit their website.