More than 500 North Central College students, employees, alumni, friends and family members were among the 5,100 community volunteers who gathered on campus Feb. 20-21 for a common goal: to pack nutrient-rich meals as part of the Feed My Starving Children Feed the Need! MobilePack worldwide effort.

“We want to be involved and know we’re making a difference,” said students about why they volunteered. “We’re a service community and like to come together and serve others.” All total, 1,053,216 meals were packed, feeding 2,885 kids for an entire year.

Meal ingredients included a vitamin powder, dehydrated carrots and potatoes, soy and rice, which were scooped into bags, weighed and sealed. Each bag provides six meals, which were boxed and loaded into a truck and shipped to starving children in developing countries.

“We’re providing something that can’t be measured and can't be bought, and that’s hope,” said Karli Saner, North Central College assistant director of ministry and service who helped coordinate the event and line up College volunteers.

Kaylee Lessen ’19 packed meals with friends from Focus, one of the College’s faith-based organizations. Having traveled and served in the Dominican Republic, Lessen said, “I’ve served in the DR where we gave meals to kids, so I know how important the work is. And it’s great to do something like this to serve so many people, not just a few.”

Teal Russeau ’19 invited her two sisters and mom and dad to serve with her. Residents of Wheaton, the family has packed meals at Feed My Starving Children before. “It’s a great opportunity for everyone in the family to come together and help people in need and make a difference,” said her dad Kevin.

This is the second year North Central has hosted Feed the Need! MobilePack in the Residence Hall/Recreation Center. Beginning five years ago with four area churches, the effort now involves 25 churches, corporate sponsors, civic organizations, schools and members from the community.

North Central trustee Herman White and his wife Peggy, a North Central retiree, volunteered for a second time. “It’s almost like having someone over to dinner,” said Herman. “And this is so well organized, from registration and orientation to doing the work.”

Peggy added, “Of any ministry that I have ever done, this is most satisfying because the work of my own hands is going to help someone in dire need.”

Some alumni, including Elgin residents Madison Haski ’14 and Alayna Dufour ’14, returned because they loved helping out when they were students. “And the fun part of serving is running into old friends and people you know,” said Dufour.

We’ve collected our own photos from the MobilePack event and invite you to take a look. 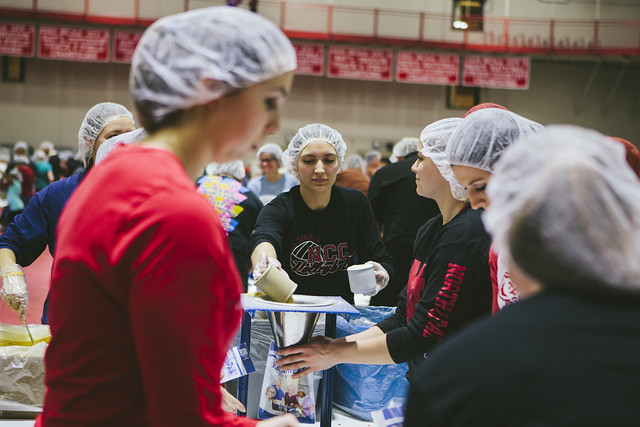