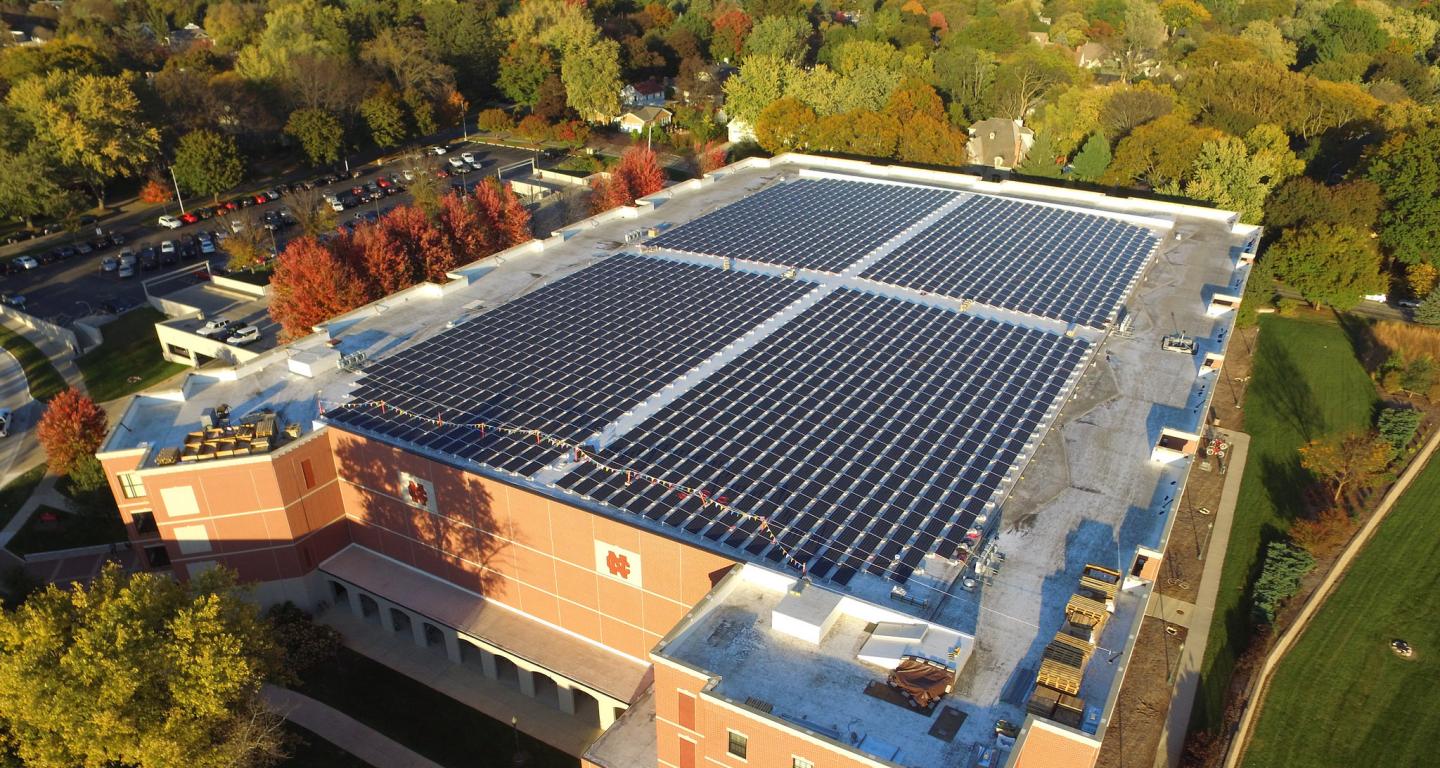 North Central College has moved forward on yet another major renewable energy project, becoming a leader in photovoltaic arrays among small colleges.

“We already have a portfolio of sustainability projects completed on campus in geothermal, solar thermal and energy-efficient lighting,” says North Central College President Troy D. Hammond. “Now we’re going to have one of the largest photovoltaic arrays of any small college in the country right here on our campus.”

The installation of 1,632 solar photovoltaic (PV) panels and energy storage system on the roof of the Residence Hall/Recreation Center (Res/Rec) will provide 22 percent of the electricity for Res/Rec, and the College will experience immediate energy savings. The array should be operational by year’s end.

Res/Rec was an ideal choice to locate the 538.56 kW solar array. The four-story, 201,439-square-foot structure uses the most electricity of any building on campus and has the largest roof with no obstructions. Awarded LEED Silver Certification, the building houses a 265-bed dormitory wrapped around an NCAA-regulation indoor running track, multipurpose athletics courts, training room and fitness center.

Hammond worked with Convergence Energy to right-size and design the array, which covers the arena portion of the roof. In addition to the solar array that absorbs and converts sunlight into electricity, the project includes 12 solar inverters that change the electrical current from direct to alternating current and an integrated 250 kW energy storage system.

The energy storage system is two lithium ion batteries. North Central has partnered with Intelligent Generation to manage and sell energy capacity in the batteries to the electric grid as a way to help pay for the project. Based on demand and other factors in the marketplace, the grid operator PJM will either draw from or fill the on-site battery.

Another critical component of this project, says Hammond, is the educational impact it provides for students. “Students who come here will have firsthand real experience with the renewable energy technologies, including the economics and financing of these kinds of projects. It’s an important part of our curriculum in renewable energy and technology.” In addition, the College is considering a proposed interdisciplinary major in environmental studies, with courses focused on sustainability and other relevant topics.

Currently, students from two classes have already been involved with North Central’s solar panel and energy storage project. This fall, the Introduction to Public Relations class (photo, right), taught by Assistant Professor of Communication Emily Cramer, has been researching and creating a public relations plan for promoting the solar array to media, influencers and the public.

“Students are competing in teams or ‘firms’ to produce the best PR plan and will give a final presentation at the end of the term. It should be a guidebook for those in sustainability to use and implement,” says Cramer.

This past spring, the Cost Accounting class, taught by Associate Professor of Accounting Gerald Thalmann, prepared a cost payback analysis of the technology. Students confirmed a projected full payback in 11 years or sooner, depending on electric prices. The College estimates that some 700,000 kilowatt (kWh) hours will be saved per year.

Members of the entire campus and local community can learn about this renewable energy project, too. Informational tours to the roof of Res/Rec are offered and an interactive display will be featured in the new Science Center, which opens fall 2017.

Brittany Drummond, North Central’s sustainability coordinator who helps advance sustainability efforts on campus, says, “President Hammond is a huge supporter of renewable energy and it took his commitment to sustainability to get this project done.”

Funding includes a $50,000 grant through the city of Naperville Renewable Energy Program and the College’s green revolving fund, the Cardinal Sustainability Fund, a portion of North Central’s unrestricted endowment that has been committed to sustainability projects.