Brady Dickerson ’20 has passion to serve through Air Force ROTC

Like any student at North Central College, Brady Dickerson ’20 balances classes and school activities. However, Dickerson is also involved in the Air Force Reserve Officer Training Corps (AFROTC). Since his sophomore year of high school in Peoria, Ill., Dickerson knew he wanted to serve his country.

Dickerson’s goal to join the U.S. Air Force and become a pilot stems from his family’s long history of military service.

“Military is very important in my family; both of my grandfathers and my dad were in the military,” said Dickerson, whose twin sister is currently attending the U.S. Air Force Academy. “Serving in the Air Force has always been a dream of mine, and I was trying to find the right path for me and how I could get into the flight program.” That path ended up being the ROTC program at North Central College.

Dickerson is part of the U.S. Air Force ROTC Detachment 195. The program is composed of 19 local colleges and universities. The ROTC program will help Dickerson land a position as an officer in the Air Force when he graduates from North Central. He aspires to be a pilot of an A-10 plane, which provides troops on the ground with air support. He wants to follow in the footsteps of his father who served as a TAC-P––a job that requires calling in airstrikes for troops on the ground who are in trouble and need extra help.

“I believe that soldiers do the most [work] for this nation, and I’ve always wanted to serve my nation to the best of my ability,” he said. After graduation, ROTC officers serve a minimum of four years active duty or six years in the reserves.

As a college student majoring in physics, it is normal to have a chaotic schedule, and Dickerson is all too familiar with balancing academics, athletics and ROTC. Three times a week, ROTC cadets have physical training, which includes basic exercise to ensure they are staying in shape. On Thursdays, Dickerson takes the train to Chicago for training. This includes four hours of drills and marching that would be taught at basic training. Afterward, he attends an Aerospace Studies class where he learns valuable skills required for officers in the Air Force. Although his schedule is hectic and busy, he said, it has made him a more disciplined person.

In addition to being a ROTC cadet, Dickerson runs for the track and field and cross country teams, and he chose North Central because of coach Al Carius. “There is so much I admire about Al,” said Dickerson, adding that Carius cares for each member of the team and is always the first to ask how something went.

Dickerson’s advice for prospective ROTC cadets is “to keep with it.” In fact, his hard work and devotion to ROTC earned him a place in a very selective Air Force summer program. “There is nothing I’d rather be doing with my life. I am receiving an outstanding education, running for one of the best programs in the nation and serving for the greatest Air Force in the world,” he said.

As of the 2016-2017 school year, North Central College’s ROTC program has seen the largest increase with a total of seven cadets. Two of the Army ROTC cadets, Mitch Reid ’17 and Ryan Kelsey ’17, will be graduating June 10 and commissioned that afternoon as second lieutenants. They also will be serving as Field Artillery officers.

“North Central ROTC cadets have the traditional college experience and also outstanding military leadership training to become commissioned officers in the U.S. Army or Air Force,” explained Julie Carballo, director of first generation programs and military student services coordinator. Effective for the 2017-2018 school year, cadets who have the ROTC tuition scholarship issued by the U.S. Department of Defense will be awarded an annual grant of up to $10,000 for room and board at North Central. For more information about North Central’s ROTC program contact Carballo at ROTC@noctrl.edu or 630-637-5155.

Dickerson’s insignia (photo, below): The row of bars signify physical achievement, scholarship and honor flight. The small bar above is an award Dickerson just received: an American Legion Military Excellence Award. Only three freshmen in his detachment were recognized. 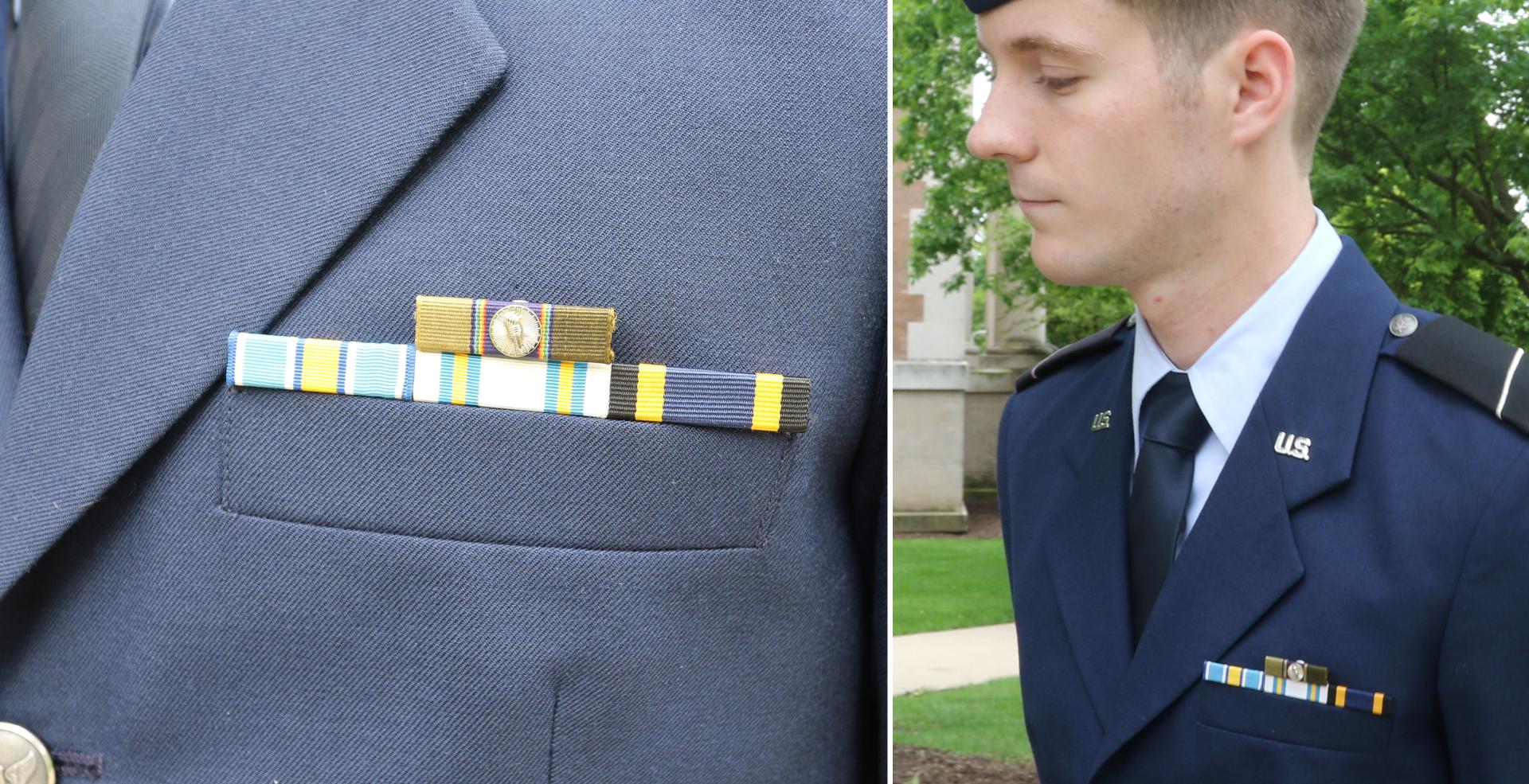