Sarah Gaither ’18 was like many students upon their arrival at college: she knew she wanted to make an impact. She is exceptional, however, because she used her time at North Central College to achieve that goal—literally.

Gaither won the Oustanding Senior award for the North Central Class of 2018 and received the Dr. Francine G. Navakas award as the outstanding student in interdisciplinary studies. She is the first student to major in environmental studies at North Central, adding it to her original major in physics. President Troy Hammond announced Gaither as Outstanding Senior only hours after Gaither introduced Hammond at the annual Rall Symposium for Undergraduate Research.

“North Central College provided me the opportunity to grow two very important passions of mine—understanding how the world works and trying to make the world a better place,” Gaither said. “These two passions came together through my experiences with science and environmental activism.”

The awards cap a distinguished career for Gaither, who has paired academic achievement with extensive involvement in student organizations and projects intended to improve life on campus. Gaither began with an independent project that demonstrates the use of photovoltaic cells. She went on to contribute her expertise in science and sustainability in the design of the College’s energy efficiency initiatives. With her help, photovoltaic arrays are now in place atop the Residence Hall/Recreation Center, the College’s business operations and maintenance facility and the Dr. Myron Wentz Science Center.

Gaither presented the photovoltaic project, consisting of a handmade solar panel and electrical panel, at the Rall Symposium as well as at the Association for the Advancement of Sustainability in Higher Education Conference.

“Sarah’s display will continue to be used by faculty and staff to educate students and the community for years to come,” said Brittany Drummond, sustainability coordinator for North Central College.

Drummond witnessed Gaither’s commitment to the environment firsthand when she was a student worker in the sustainability office. “I have been especially impressed by how Sarah goes above and beyond, taking initiative and creating new ideas to improve the sustainability of the College,” Drummond said. “For instance, she created a formal proposal, which we approved, to build an energy bike to use at campus events so students and staff could feel how much energy is required to run a radio or turn on a light bulb. We provided her the funds, and she purchased supplies and built the energy bike herself.”

Gaither took leadership of and revived Green Scene, the College’s environmental action and awareness student organization, as well as coordinating Bike to Campus Day and caring for the College’s community garden. She has been heavily involved in activities for the physics program and has done STEM outreach at local schools. Gaither even designed a sustainability plan for her church.

“When I look at our world today, I find that some of the most important challenges we face are related to energy production,” Gaither said. “I want to be a part of the solution.”

Somewhere between working to preserve the health of our planet and succeeding academically, Gaither distinguished herself as a captain of the women’s soccer team. Her head coach, Andrew Gamarra, admires her leadership.

“Sarah has been a terrific role model to younger North Central students and has shown what it takes to be successful,” Gamarra said.

Gaither will go on to graduate school at the University of Illinois at Urbana-Champaign next year, where she will pursue a dual M.B.A. and master of engineering degree in energy systems. If her work so far is any indication, it will be a highly involved and fortuitous experience.

Associate Professor of Physics Paul Bloom, who was Gaither’s faculty advisor on her photovoltaic panel project, best assesses Gaither’s time at North Central: “It’s simply difficult to imagine a student who has been more successful and more engaged in her education and in the life of this college.” 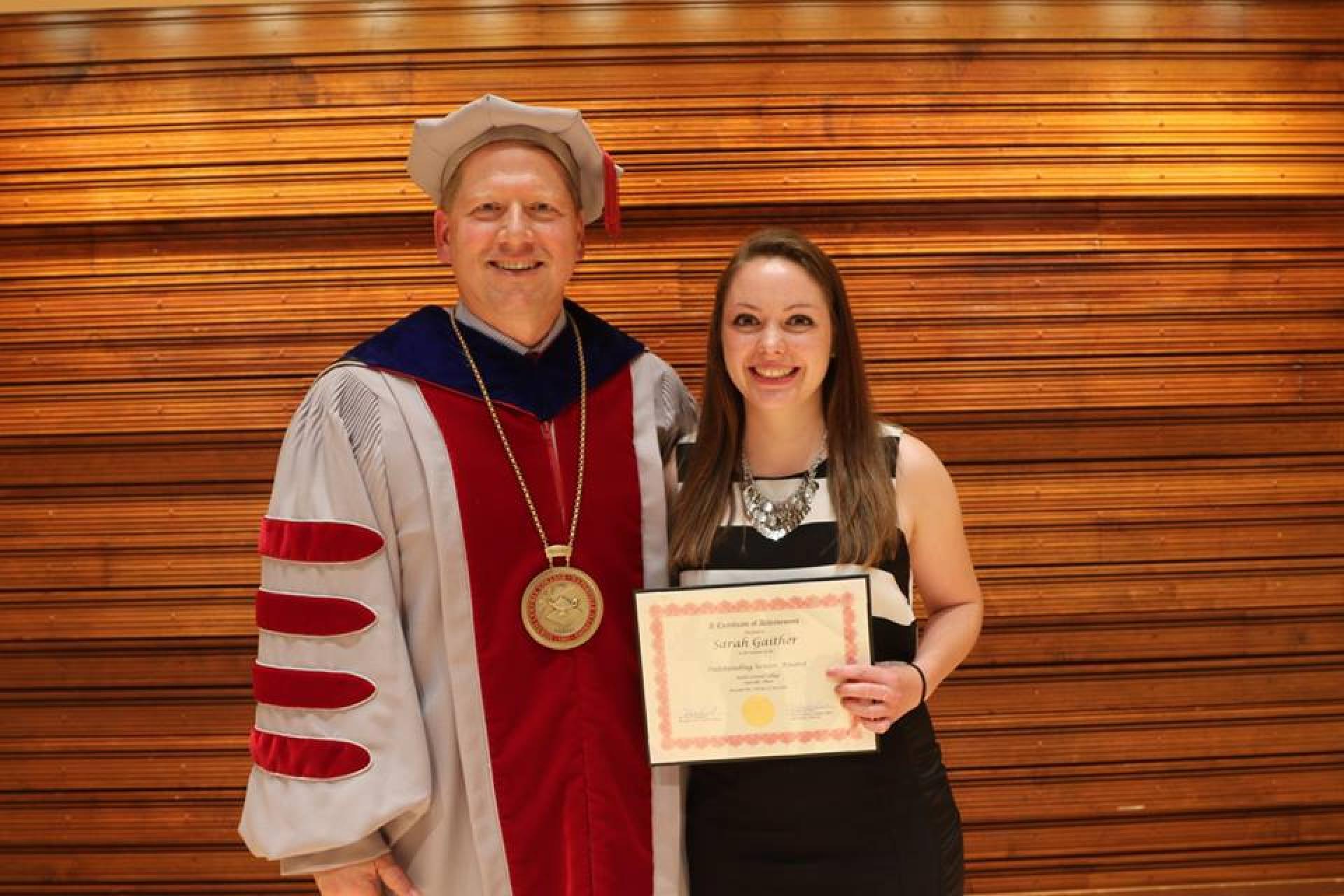