The North Central College Cardinals defeated the University of Wisconsin-Whitewater 41-14 in Stagg Bowl XLVII in Shenandoah, Texas to cap a historic season, as the Cardinals won the NCAA Division III Football National Championship in their first-ever appearance in the championship game. The win marks the 40th overall team national title for the College’s athletic programs.

The Cardinals started strong, as Terrence Hill '22 returned the opening kickoff 49 yards and the offense quickly marched 45 yards for the opening touchdown, a five-yard run by running back Ethan Greenfield '22. North Central never looked back, building a 27-0 lead by halftime and scoring the first 34 points of the game unanswered. Greenfield ran for three total touchdowns, quarterback Broc Rutter ’20 threw for two scores and ran for another, and cornerback Julian Bell '22 had two interceptions for the defense.

With a fourth quarter touchdown pass to wide receiver Andrew Kamienski '21, Rutter set a new Division III record for career passing yards with 14,258. It was Kamienski's 31st touchdown of the season, and he also went over 2,000 receiving yards for the year.

The team championship was part of a landmark night for the College, as Rutter won the 2019 Gagliardi Trophy for most outstanding player in Division III college football, which was announced shortly before kickoff. This marks the eighth time a school has won the Division III national championship and had a Gagliardi Trophy winner in the same season. The trophy recognizes excellence in academics and service as well as athletics.

“This is a huge honor,” said Rutter. “I just have to give credit to my teammates and coaches. They’ve done such a great job of putting me in positions to succeed.”

Rutter is the first North Central player ever to win the Gagliardi Trophy. He is only the fourth player from the College Conference of Illinois and Wisconsin (CCIW) to earn the award, along with Elmhurst College running back Scottie Williams in 2012, Augustana College offensive lineman Blaine Westermeyer in 2009, and Illinois Wesleyan University quarterback Lon Erickson in 1996.

“He’s really a special soul,” North Central head football coach Jeff Thorne said of Rutter. “Nobody deserves it more than him. He’s been such a great leader, a great teammate and just a great human being.“ 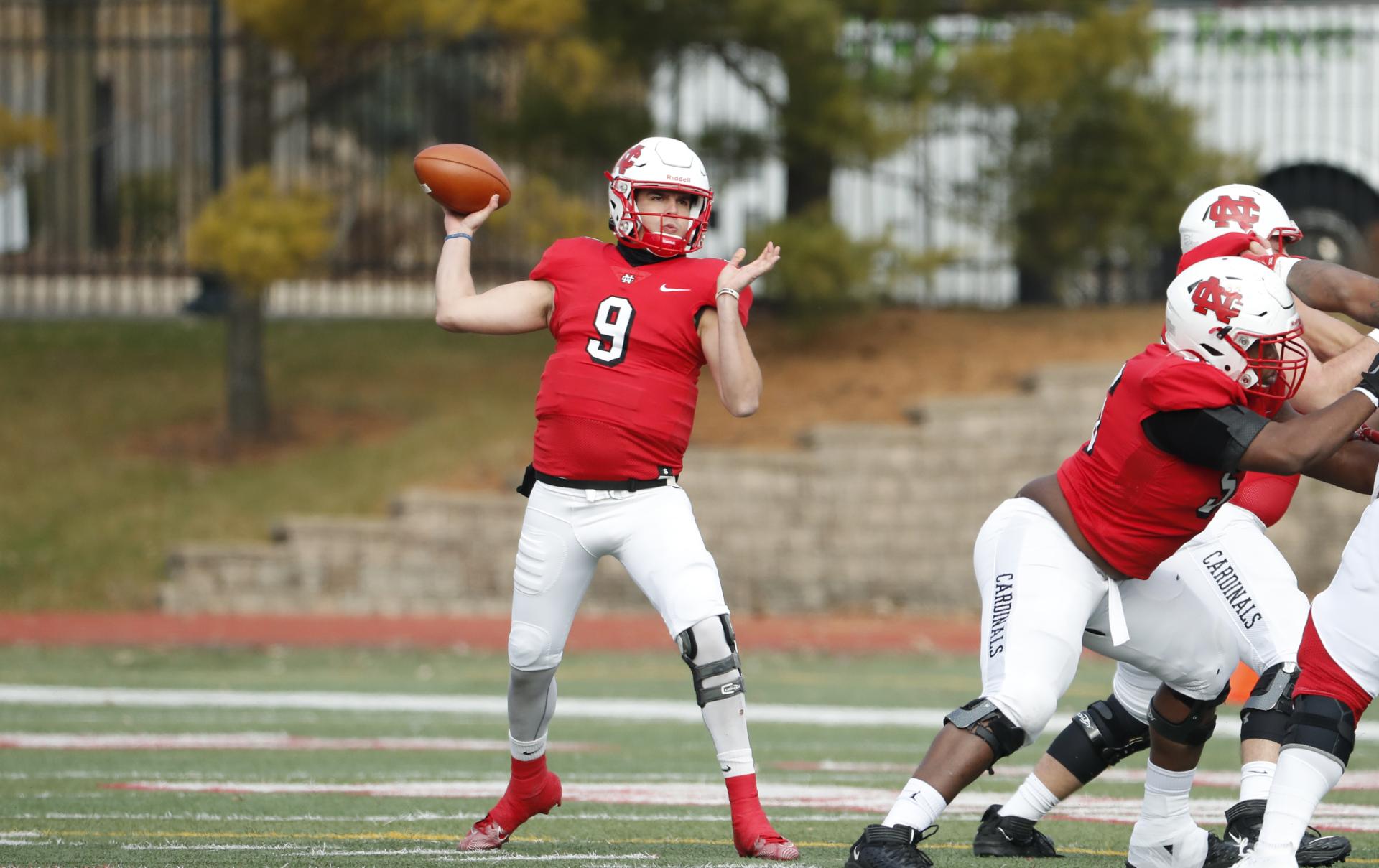 The North Central College journey to realize a football dream

The Cardinals’ run to the championship was epic. North Central dominated the CCIW during the regular season, placing second in the conference in defense while leading the conference and ranking second in the nation in offense. A loss to rival Wheaton College on October 5 threatened to upend their championship hopes, but the Cardinals rallied to finish the season 9-1 and earn an at-large bid in the national playoffs.

North Central faced about as tough a path to their Stagg Bowl win as possible. The Cardinals defeated four opponents ranked in D3football.com’s national top 10, including the championship win over No. 7 UW-Whitewater, a quarterfinal victory over No. 9 Delaware Valley University, and an upset of 13-time national champions and No. 2-ranked Mount Union University in the second round. A decisive semifinal victory over No. 4 Muhlenberg College by a score of 45-14 sent the team to its first national championship game in school history.

While the championship victory is a surprise to some, this accomplishment has been a long time in coming for the Cardinals. North Central has won or shared the CCIW championship in 11 of the past 14 seasons. They have appeared in the NCAA Division III playoffs in 10 of those seasons, compiling 17 victories.

The new champions will return to Naperville from Shenandoah, Texas on Saturday, December 21, between 1:30 and 2:30 p.m. The College invites any and all fans to welcome the team back to campus at Merner Field House (450 S. Brainard St.). Follow North Central College on Twitter @northcentralcol for updates on the team’s arrival time.

North Central College provides students with the confidence, instruction and direction they need to exceed their personal best in athletics, inside and outside of the classroom, and throughout their careers. Founded in 1861, and located just 28 miles west of Chicago in the Historic District of Naperville, Illinois—named among the nation’s “Best Places to Live” by Money magazine—North Central is home to nearly 3,000 students and more than 70 undergraduate majors, 60 additional undergraduate minors and concentrations, and 12 graduate degree programs.

Visit northcentralcollege.edu/dream-bigger to discover why U.S. News & World Report has named North Central a “Best in the Midwest” for 20 years in a row and to learn more about the College’s state-of-the-art facilities and distinctive programs, particularly in the sciences and business.

For more on the game and the football program, visit northcentralcardinals.com.