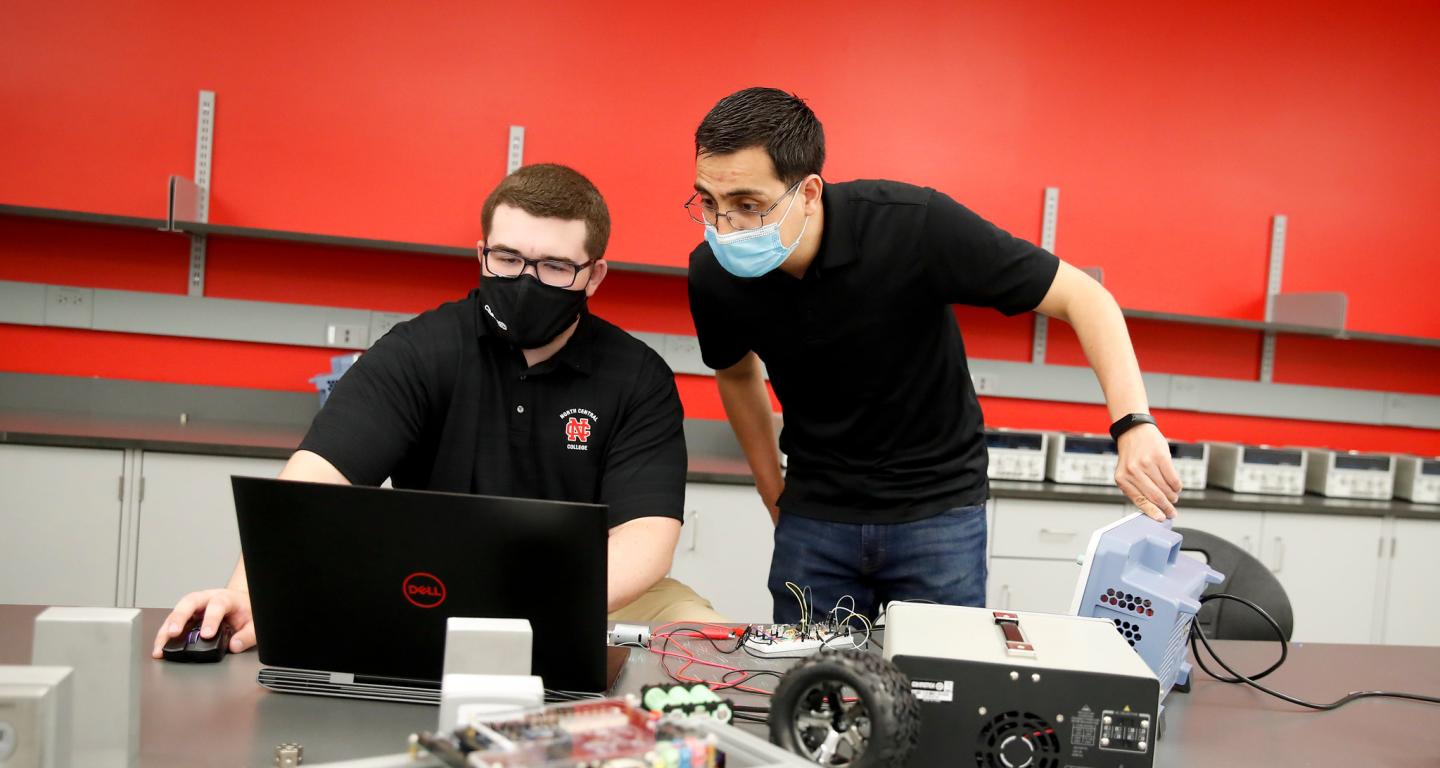 Robots and self-driving cars are the kind of amazing feat of engineering we often take for granted. Our fascination with these devices feels timeless, as potential uses for computers and mechanical devices inspired popular fiction which in turned inspired practical applications we either read about or use on a regular basis. Now, engineering students at North Central College are fitting right into the intersection of science fiction and everyday life by designing and to building a robotic car.

Hector Rico-Aniles, assistant professor of electrical engineering, is leading a summer research project to create the device. He said that a good way to think about the car is like an exploration robot, in the same vein as the Mars Rover, as opposed to a street-ready automobile. Electrical engineering majors William Jandak Jr. ’23 and Gavin Bauknecht ’23 are learning as they go, spearheading plans, construction and programming of the car.

At the time of writing, the students are working on choosing the right materials to build a robot, learning about what components make robots function, designing the car’s circuits and sensors, and ultimately putting the device together piece by piece. Professor Rico-Aniles said the project is based in research and education about robotics. When they’re finished, the intention for the device is to use it in trial runs and study how it moves and responds to telecommands. These students as well as future classes of North Central engineers can go beyond reading about how robots can function in theory and see how one really works.

The implications for the project will have very real applications for students training to create the next wave of robotic devices after robot vacuum cleaners, drone delivery devices, and so on.

“The goal is to have a small car to do research in some robotics areas such as path planning, object avoidance, environment scanning (and) simultaneous localization,” said Rico-Aniles. “Some of that research can be relevant for new technologies like autonomous vehicles.”

In design and function, the engineering students’ device will share DNA with remote-controlled toys and hybrid cars, but will boast much more sophisticated internal computer programming. Rico-Aniles gave a brief description of what will be “under the hood” that will allow the car to run on command or on its own and never need a fill-up:

“The car runs using DC servo motors that are (powered) by a 24-volt battery,” he said. “It is going to have two main (single-board computers)—a Raspberry Pi and an FPGA SoC board—(which) will control the car … so that it can operate as an autonomous or tele-operated robot. It will use a small laptop-like charger along with a battery protection board to charge the battery.”

The project began with an idea Rico-Aniles came up with while working in Mexico with his colleague Professor Gerardo Diaz. “We wanted to test a new algorithm in path planning for autonomous vehicles,” Rico-Aniles said. “But, in order to do the whole process of design, simulation, and physical implementation, we needed an actual physical robot.”

North Central facilities are helping to make those ideas a reality. Along with using commercial aluminum parts in the construction of the car, Rico-Aniles and his students are also custom printing parts in the College’s Omron laboratory and making use of the equipment and workspace in the Molex laboratory. Both labs are located in the Dr. Myron Wentz Science Center on campus, which was built to house precisely this sort of ambitious project.

Bauknecht and Jandak are doing far more than creating a device that will have great applications for them and their colleagues. They are developing skills that can aid them significantly in their career plans.

“During this project the students are developing important technical skills like motor control, power electronics, hardware design, printed circuit board (PCB) design, circuit prototyping, and testing that are going to help them if they go (into the engineering) industry or grad school,” said Rico-Aniles. “The research process also aims for them to develop some soft skills like self-motivation, critical thinking, working on a team, and interpersonal communication.” 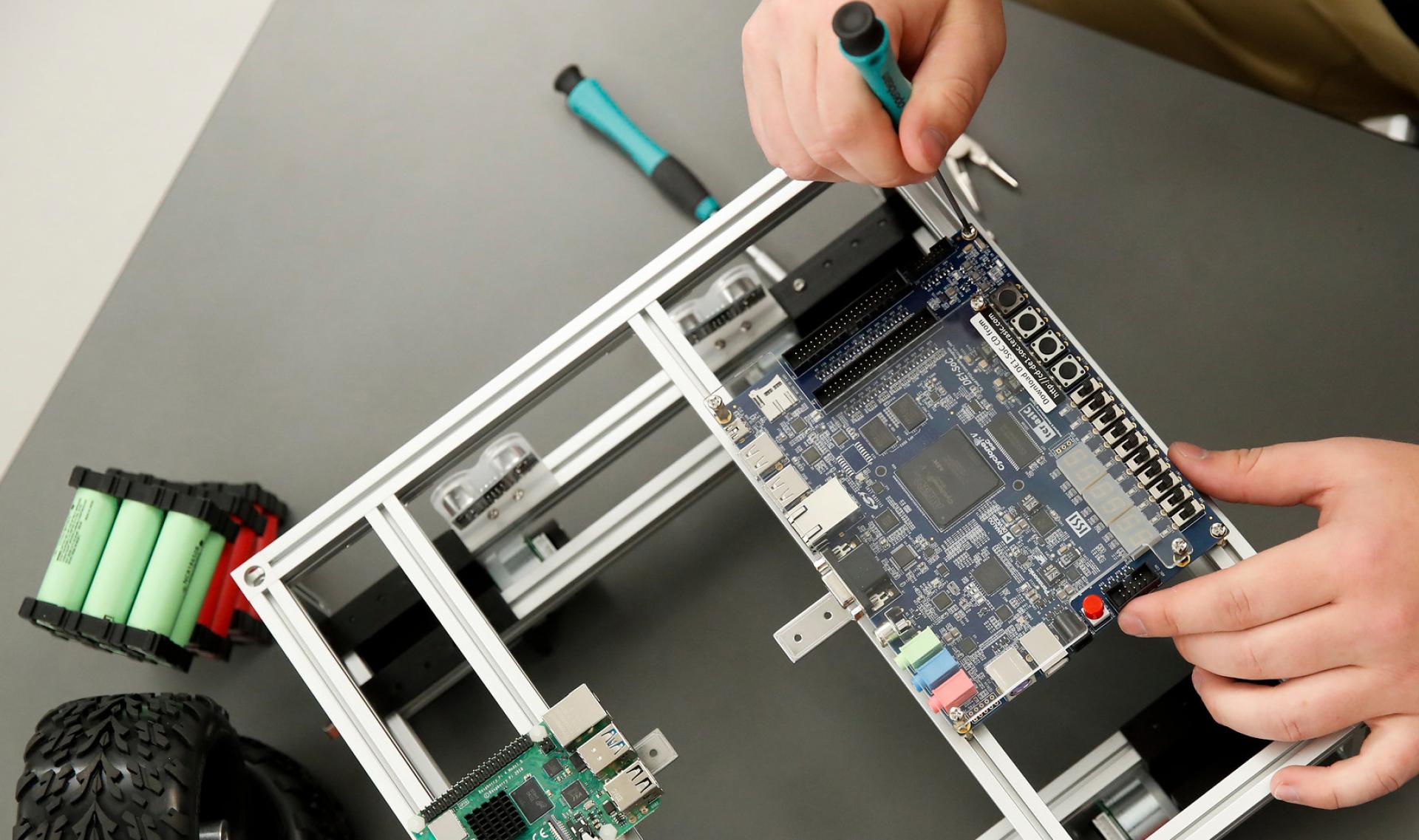 Jandak works on a circuit board as part of the robotic car project.