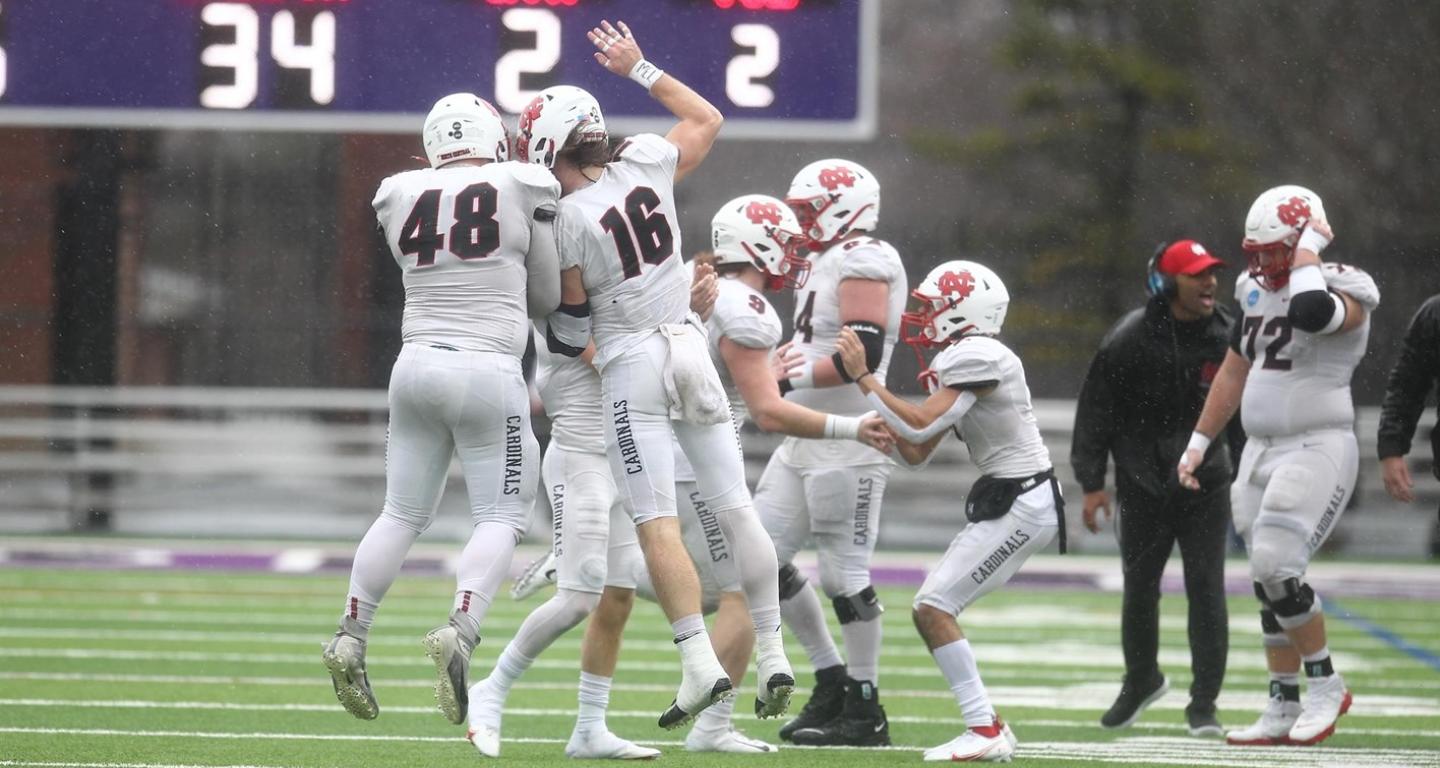 After two impressive postseason wins, the North Central College football team changed locations for its semifinal matchup with the University of Mount Union and made itself at home, dismantling the fourth-ranked Purple Raiders, 26-13, to advance to its second straight national championship game.

The Cardinals will face the University of Mary Hardin-Baylor (Texas) in the Amos Alonzo Stagg Bowl at Tom Benson Hall of Fame Stadium in Canton, Ohio on Friday, December 17 at 6:00 p.m. CST.

The No. 1-ranked Cardinals (13-0) overcame windy, rainy conditions with its overpowering running game, gaining 290 rushing yards and owning a 16-minute advantage in time of possession, extending the longest current winning streak in college football to 24 games.

After forcing a North Central punt on the first possession of the day, the Purple Raiders (13-1) opened the scoring with a seven-play, 84-yard drive which culminated in Braxton Plunk's eight-yard touchdown pass to Jaden Manley.

The Cardinals responded with an 11-play, 71-yard drive that featured Ethan Greenfield prominently. The program's all-time leading rusher ran six times for 29 yards and Luke Lehnen caught the Mount Union defense napping on a play fake and darted downfield for a 20-yard gain before scoring on Lehnen's four-yard strike to DeAngelo Hardy. The extra-point attempt sailed wide, leaving North Central with a 7-6 deficit with 2:40 left in the first quarter.

The visitors forced a Purple Raider punt on the ensuing possession, but the kick landed out of bounds at the North Central one-yard line. With the aid of a pass-interference penalty on a fourth-down attempt, the Cardinals got the ball past midfield before being forced to punt. North Central forced a three-and-out before taking the lead with a four-play, 66-yard drive which culminated in Lehnen's 34-yard scoring pass to tight end Matt Robinson with 4:20 left in the opening half.

Mount Union running back Josh Petruccelli fumbled on the next drive and Jake Beesley recovered the ball at the Cardinals' 43-yard line with 3:31 on the clock. North Central set up to close the half with a 37-yard field-goal attempt by kicker Tanner Rains, but a false-start penalty bumped the Cardinals back five yards. Unfazed, Rains put his foot into the ball and connected on a 42-yard attempt into the wind as time expired to give North Central a 16-7 lead at halftime. It is the Cardinals' longest made field goal since Derik Judka's 43-yard kick against Millikin University Nov. 10, 2018.

The Cardinals came out aggressive in the second half, setting up a deep pass attempt to Andrew Kamienski. Mount Union's defense, however, was prepared and got the ball back on Malik Britt's interception. Just four plays later, however, North Central forced another punt, which traveled only nine yards after it was blocked by Dan Gilroy. A 40-yard run by Greenfield got the Cardinals on the doorstep, and Lehnen kept the ball on the option to score his 10th rushing TD of the year from two yards away.

The Purple Raiders turned to their passing game to try and get back into the contest, but the North Central defense held strong and forced a fourth down-and-8 situation near midfield. Mount Union attempted a conversion to keep the drive going, but the Cardinals brought a fierce pass rush and Jamauri Spivery and Cameron Martin sacked Plunk at the Mount Union 33. The Cardinals converted the opportunity into a 31-yard field goal by Rains, making it a three-score game at 26-7 with 11:06 to play.

The hosts managed their first score since their opening drive with 6:40 left in the game, as Plunk threw a 20-yard touchdown pass to Jaden Manley, narrowing the gap to 26-13. The two-point conversion attempt was unsuccessful as Dakota Cremeens intercepted Plunk's pass.

Greenfield finished with 190 yards on 31 carries, while Lehnen ran for 83 yards on 14 attempts and completed 8 of 11 passes for 81 yards. Hardy was the team's top receiver with four grabs for 33 yards. Storm Simmons made a team-high nine tackles, while Cole Griffin made six.