Setting the Scene: The Cardinals take on the University of Mary Hardin-Baylor, another of Division III's stalwart programs, as they look to claim a second straight national championship.

Series History: This is the first meeting between the two institutions in any team sport.

National Rankings: Mary Hardin-Baylor was ranked No. 2 in both polls.

Scouting the Crusaders: A run of 17 straight points midway through the second quarter was enough to keep Mary Hardin-Baylor clear of Wisconsin-Whitewater in Saturday's semifinal at Perkins Stadium, as the Crusaders improved to 14-0 with a 24-7 win over the Warhawks.

Quarterback Kyle King opened the scoring with a pair of nine-yard touchdown passes to Brandon Jordan, which were part of Jordan's 11-reception, 164-yard performance.

The Crusaders rank third nationally in scoring offense (48.3 points per game) as well as scoring defense (9.0 points allowed).Of UMHB's 471 average offensive yards, 249 have come through the air, and it has allowed just 234 total yards per game.

King has completed 64 percent of his passes and thrown for 32 touchdowns with just two interceptions. Jordan has caught 51 passes for a team-high 971 yards and 16 TDs, while Alshonso Thomas owns team-best rushing totals of 1,063 yards and 12 scores. King has proven a viable running threat with 11 rushing touchdowns of his own.

This Week for the Cardinals: North Central eliminated Mount Union from the postseason on the Purple Raiders' home field for the second straight season Saturday, steadily pulling away for a 26-13 victory at Mount Union Stadium.

After yielding a touchdown on the game's first drive, the Cardinals did not allow another until they had scored 26 unanswered points. Luke Lehnen threw touchdown passes to Matt Robinson and DeAngelo Hardy before running for a score of his own.

Kicker Tanner Rains, operating in rain and winds in excess of 30 miles per hour, successfully kicked field goals of 42 and 31 yards.

Ethan Greenfield ran for 190 yards on 31 carries as the Cardinals finished with 293 total yards on the ground. It is the largest rushing total allowed by a Mount Union team since 2007.

North Central in the NCAA Playoffs:  The Cardinals own a 23-11 overall record in the Division III Football Championship, including victories in heir last 12 first-round games.

Kamienski was selected to the First Team, while Clarke made the Second Team.

North Central players have won 57 total All-America awards, including 14 from the AFCA which ranks 17th among all Division III programs. 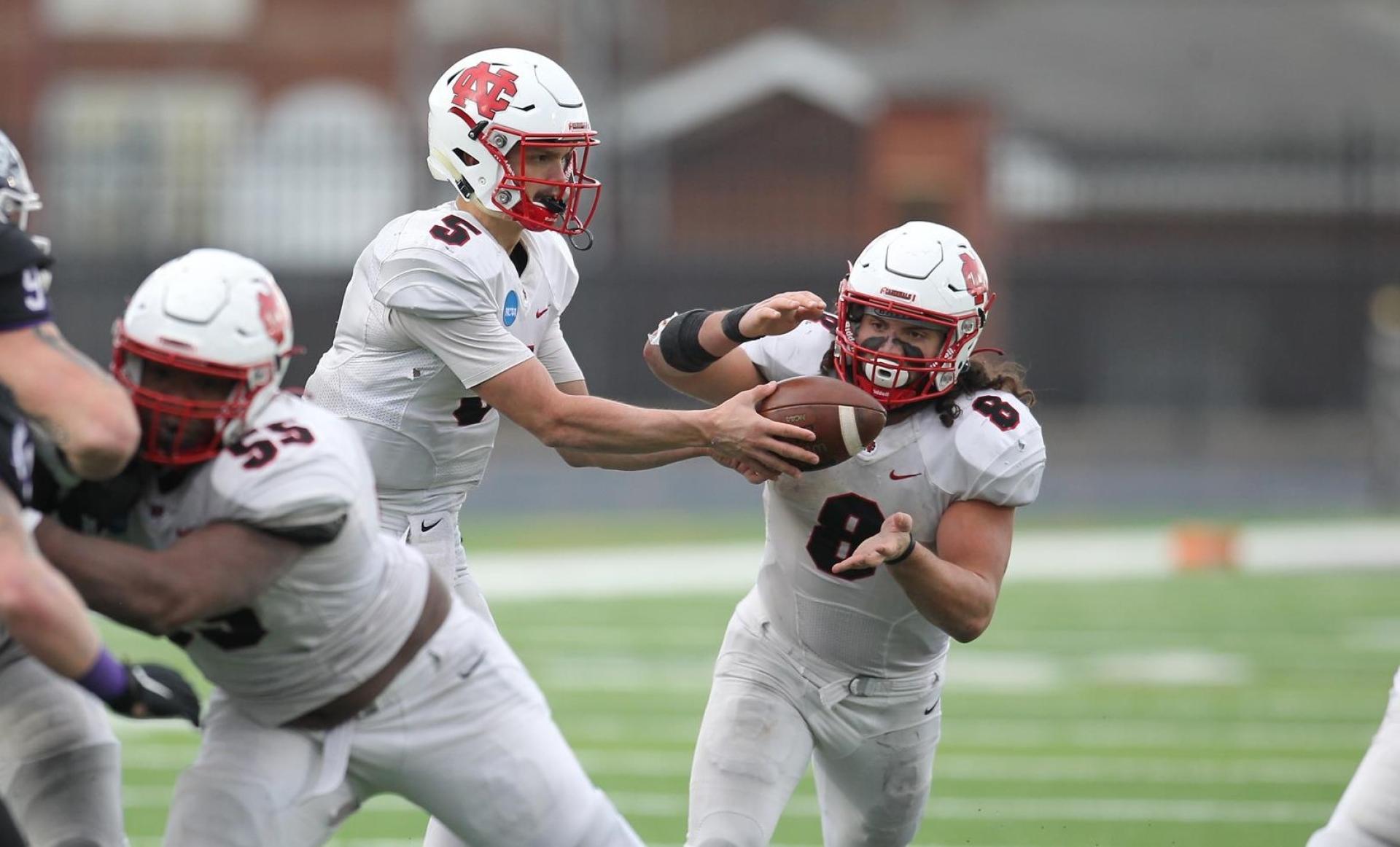