2021 in review: a year of record-breaking media attention for North Central College

A new year brings moments of reflection and a chance to contemplate the major occurrences of the year gone by and celebrate great successes. North Central closed out the 2021 calendar year in true Cardinal fashion, making it a year for the record books from a media perspective. The College secured 448 media placements over the course of 2021, which is a 247.3% increase in media engagements from 2020. Covering everything from breaking news to key moments in North Central’s history, the College and North Central’s subject matter experts continued to be in such high demand from multiple media outlets that at times, they became weekly regulars.

The following chart displays the rise in media engagements locally, nationally, regionally and overall from 2020 to 2021. 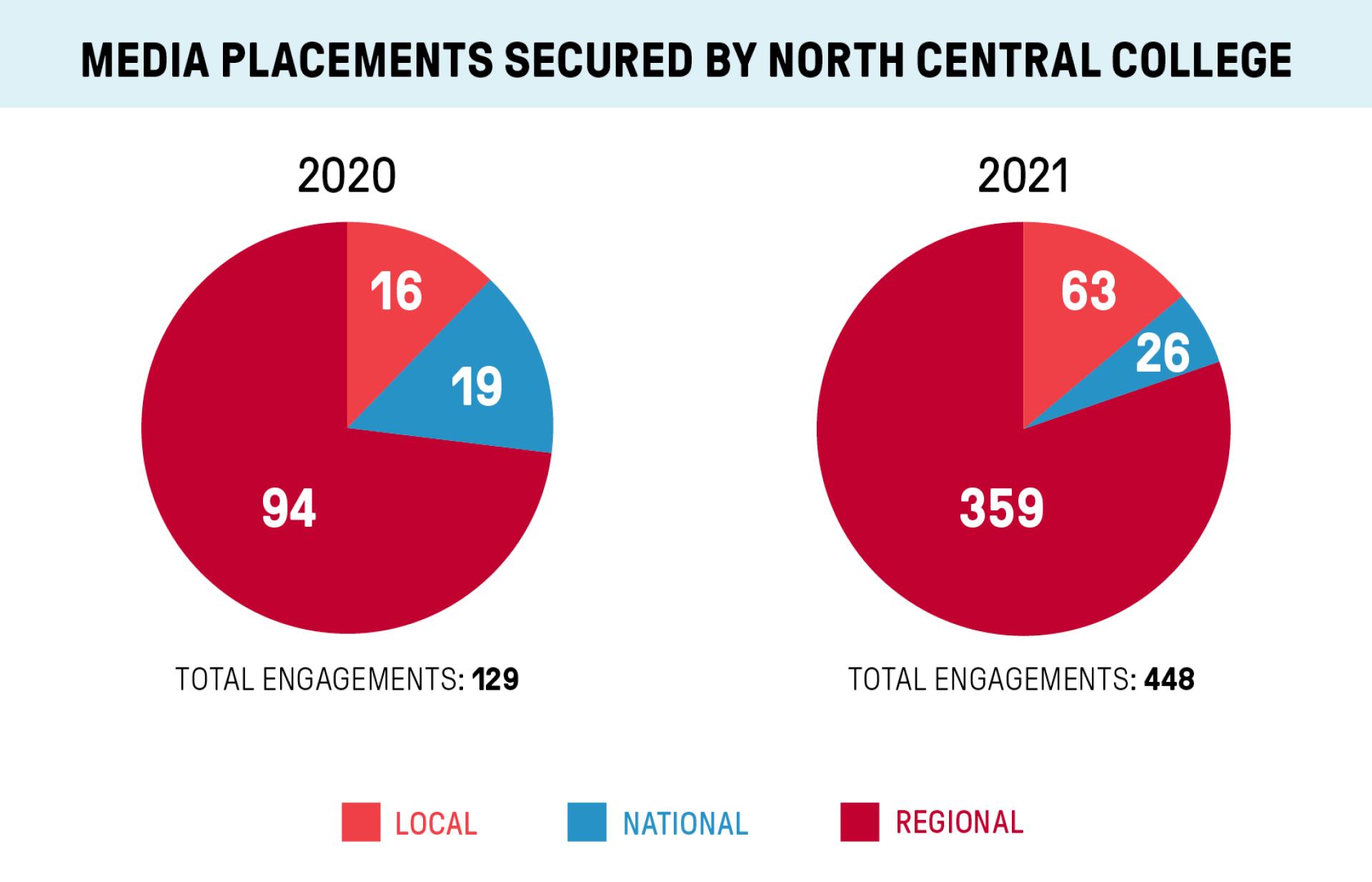 Here are some of the biggest media highlights from the year:

In December 2020, North Central College announced that a new saliva-based, on-campus diagnostic testing program will be used for the spring 2021 semester. It is offered under the name SHIELD Illinois and uses a highly accurate saliva-based test created by researchers at the University of Illinois. The tests are easy to administer, and results are expected to be available within 24 hours. This will enable the College to increase its testing capacity and narrow the window for COVID-19 exposure by more quickly identifying and isolating positive cases.

Joe Biden was sworn in as the nation’s 46th President Wednesday, January 20, and Kamala Harris made history as the first Black, female and South Asian American to become vice president. Set against a backdrop of a locked-down Washington and a socially distanced ceremony, Biden made a plea for national unity in his inaugural address as political, economic and health care crises grip the nation.

North Central College political scientists were sought after to weigh in and provide analysis on the historical day’s events. From dissecting the inaugural ceremony to what can be expected from President Biden’s first 100 days in office, our experts were at the helm of media networks across Chicagoland.

Click on the links below to see the media coverage secured surrounding the 2021 inauguration:

After hosting a virtual graduation last fall due to the COVID-19 pandemic, this spring, North Central College graduates from the classes of 2020 and 2021 got the opportunity they've been waiting for: To walk across the stage in front of their family and friends.

North Central College was one of a handful of institutions that celebrated its graduates in four separate outdoor commencement ceremonies over the course of two days. The ceremonies were modified from the College’s traditional commencement events to comply with current COVID-19 safety protocols, including event capacity limits, physical distancing, and required face coverings.

Three of the building’s four floors focus on the health care occupations, allowing North Central to introduce or expand its occupational therapy, physician assistant and physical therapy programs. Anatomage tables in the skills lab, for example, look like large touchscreen tablets and create virtual cadavers that allow users to examine bodies in greater detail and do virtual dissections.

The first floor of the new building is for North Central’s engineering program, which started in 2017. The 6,000 square feet includes a large manufacturing processes lab. The lab includes high-precision lasers for cutting metals and non-metals, a 3D printer, two computerized numerical control (CNC) milling machines, a CNC lathe and a 3-ton bridge crane.

These features and more were highlights of several media placements:

Excelencia in Education, the nation’s premier authority on efforts to accelerate Latino student success in higher education, announced Cardinal First—North Central College’s program for first-generation college students—as a winner of its 2021 Examples of Excelencia award. Cardinal First is the only institution nationwide to take the winning title in the baccalaureate category.

The four standout programs are models of culturally responsive, asset-based efforts with evidence of effectiveness in recruiting, retaining, graduating, and preparing Latino students for success in the workforce that others can learn from to serve their students more intentionally.

This national recognition has lead Cardinal First to capture the attention of media outlets locally, regionally and nationally:

The North Central College Cardinal football team worked their way through the postseason, staying on top of the charts for highest ranked team in the division, and looking to defend their 2019 national title. After much momentum and hard work, the Cardinals were denied their quest for a second straight NCAA Division III national championship by the University of Mary Hardin-Baylor (Texas), 57-24.

While the national championship outcome wasn’t what the Cardinals had hoped for, the media spotlights that ensued throughout the postseason were one for the record books:

The Cardinals looked to defend their 2019 national title, working their way through the postseason, and staying at the top of the charts for best rated team in the division. North Central continued to remain in the No. 1 spot in the D3football.com Top 25 Polls. The Cardinals were also ranked No. 1 by the American Football Coaches Association (AFCA).

The team’s momentum and track record mustered up quite the media following (see below):