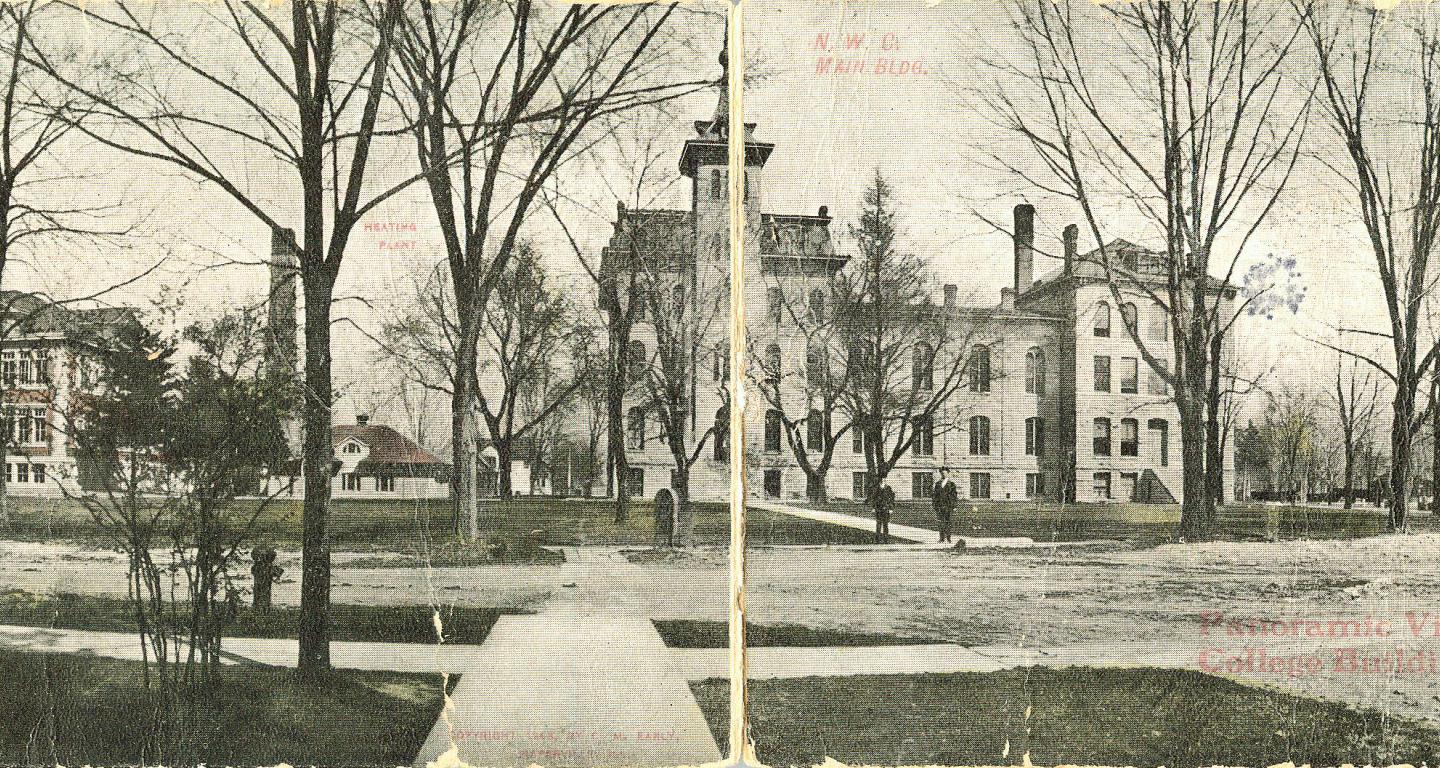 A.A. Smith shaped the educational principles on which the College developed. He supervised the move of the College from Plainfield to Naperville and the construction of Old Main. Smith also cultivated music at the College and encouraged students to exercise their bodies as well as their minds, opining that “a sound body is the condition for a sound mind.” Throughout his tenure, Smith worked for the education of women as well as men. The A.A. Smith House is named for him. It was built in 1885 by Professor and Mrs. Henry C. Smith, A.A. Smith's son and daughter-in-law, on property purchased by President Smith in 1872. In 2008 Bartley and Maricela ’99 Madden donated the house to the College after restoring it to its Victorian roots.

Henry H. Rassweiler served as the president of the College when it was known as North-Western College. While very popular among students and faculty at the College, he was dismissed by the board for his support of an Illinois amendment that would have required a major change in the composition of the trustees on the board. Active in the community, Rassweiler was central to the organization of Grace Evangelical Church and became president of the Naperville Temperance Union. After leaving the College Rassweiler served as a College trustee for five years. He spoke at the inauguration of President Lawrence Seager in 1911.

During Herman J. Keikhoefer's tenure as president, the south wing of Old Main was completed and electricity was introduced. Kiekhoefer also supervised construction of four new buildings: Nichols Gymnasium, dedicated in 1902; and Carnegie Library, Goldspohn Science Hall and the Boilerhouse, all dedicated in 1908. Kiekhoefer Hall, which houses faculty offices, the Office of Faith & Action, and Koten Chapel, is named for President Kiekhoefer.

During Lawrence Hoover Seager's tenure, the North Central Association of Schools and Colleges accredited the College, a separate building was constructed for the seminary, and the College acquired 6 acres of land north of the railroad and west of Washington Street for an athletic field with the help of Judge John S. Goodwin. Seager Residence Hall is named in his honor.

Edward Everett Rall saw the College through the difficult years of the World Wars and Great Depression. He directed the construction of several new buildings on campus, including Merner Field House and Pfeiffer Hall, as well as the acquisition of other properties that became the first women’s dormitories (Bolton Hall and Johnson Hall). When Rall retired, he remained connected to North Central. He attended Arlo Schilling’s inauguration in 1961 and returned to campus in 1965 for the dedication of Rall Hall, named in his honor. Rall's sons Joseph Edward "Ed" Rall '40 and David Rall '46 received Outstanding Alumnus Awards from North Central College and Ed Rall inspired the College's annual Rall Symposium for Undergraduate Research.

During his tenure as president, C. Harve Geiger appointed the first College chaplain and supported a rich College Chapel series. He oversaw the construction of a new library shared by the College and Grace Evangelical Theological Seminary; the renovation of the old Carnegie Library into the Alumni Hall of Science; the building of the first men’s dormitories, Seager Hall in 1954 and Geiger Hall in 1957; and the construction of women’s dormitories Kroehler Hall North and South. Geiger also appointed the College’s first vice president, Harvey F. Siemsen '20, to assist him with church relations and increasing the College endowment. Geiger established the College's first separate admissions department in 1950.

Arlo L. Schilling’s accomplishments as president included the institution of academic tenure and professional terms for faculty; the construction of Rall Hall, the Student Village and the Science Center; the renovations of Merner, Pfeiffer and Kaufman halls; and the survival of the College’s financial and enrollment crises of the early 1970s. Schilling also steered the College through the turbulent years of the late 1960s, when civil rights, the Vietnam War and broad societal unrest shook colleges and universities across the United States. Schilling oversaw major revisions to the curriculum, administration and calendar.

Gael D. Swing saw the integration of seminary buildings into the College during his first years in office. He also oversaw the renovation and renaming of the Kroehler Science Center, the Larrance Academic Center, the Harold and Eva White Activities Center and the Clare and Lucy Oesterle Library. He founded the Center for Continuing Education and the adult education program known as Weekend College. During his tenure at North Central, Swing served as president of The National Association of Schools and Colleges of The United Methodist Church and as a senator to The University Senate of the United Methodist Church. A firm supporter of private education, he was a member of the board of directors of the Council of Independent Colleges, the Federation of Independent Illinois Colleges and Universities, and the Associated Colleges of Illinois.

Harold R. "Hal" Wilde led the College through the boom times of the 1990s and the horror of the attacks of September 11, 2001. During the first decade of the 21st century, Wilde helped steer a fiscally responsible policy that allowed the College to successfully weather the Great Recession. Under Wilde’s leadership, the College experienced a sevenfold increase in endowment; continuous balanced budgets; the largest individual, corporate and foundation gifts and bequests in the College’s history; adoption of the College’s first comprehensive new curriculum in 25 years; and a broadened commitment to international programming, service-learning and interdisciplinary studies. In addition, the College successfully completed a $50 million capital campaign in 2003. Significant changes in North Central’s physical campus under Wilde included total renovation of Old Main; construction of the 57,000-square-foot Wentz Concert Hall and Fine Arts Center; two new residence halls; a “green” residence complex that surrounds a recreation center and indoor track; two state-of-the-art stadiums for football, track and field and baseball; a new cyber café for students and the community; two renovated and expanded academic buildings housing the College chapel, English and foreign language departments (Kiekhofer Hall), and the art department and a thrust-stage theatre (Meiley-Swallow Hall); and the upgrade of the campus computer system to include wireless connectivity and “smart” classrooms.

Dr. Troy D. Hammond brought visionary leadership to the College during an exciting time of expansion as well as substantial external challenges. Hammond launched his presidency with the bold Brilliant Future Campaign—a $150 million fundraising initiative that brought sweeping physical changes to campus, including construction of the Dr. Myron Wentz Science Center and the Dr. Myron Wentz Center for Health Science & Engineering; the addition of New Hall, a 229-bed residence hall; a full-scale conversion of the previous science building into the School of Business & Entrepreneurship facility; and a major renovation of Oesterle Library to incorporate an innovative Learning Commons. Hammond also created the Cardinal Sustainability Fund which led to significant LED lighting and solar projects around campus. Hammond oversaw the transition from a three-term academic calendar to semesters; a new general education curriculum; the founding of the College’s engineering programs; significant expansion of the College’s graduate health science programs; and the acquisition of Shimer College, which led to the Shimer Great Books School at North Central College. During Hammond’s tenure, several Cardinal athletic programs soared to new heights including the College’s first-ever football national championship in 2019; multiple national championships in cross country, track & field, and women’s triathlon; and the introduction of men's volleyball and lacrosse, and women's triathlon, bowling and wrestling, bringing the number of varsity sports to 27—the most of any school in the College Conference of Illinois & Wisconsin. He also served as the Chair of the President’s Council of NCAA Division III athletics. Hammond elevated diversity as a key strategic imperative, launching a President’s Task Force to address key issues and appointing the College’s first Chief Diversity Officer. Hammond also guided the College’s response to COVID-19, positioning the institution to operate and fulfill its mission throughout the global pandemic while prioritizing the health and well-being of the campus community. Hammond now serves as an Advisor to the Board of Trustees while the College searches for its next permanent president.

Our History, Our Future 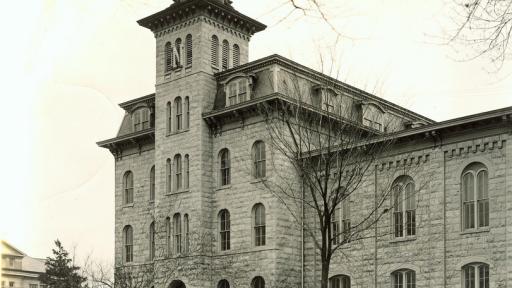