A stream of prestigious awards during 2020-2021 recognizing scholars in neuroscience affirms the program’s appeal to talented students and their aspirations. Since the discipline was introduced as a major/minor in 2013 with the hiring of Margaret Gill, associate professor of neuroscience, students have used this pathway to excel in the sciences and build credentials toward their careers. 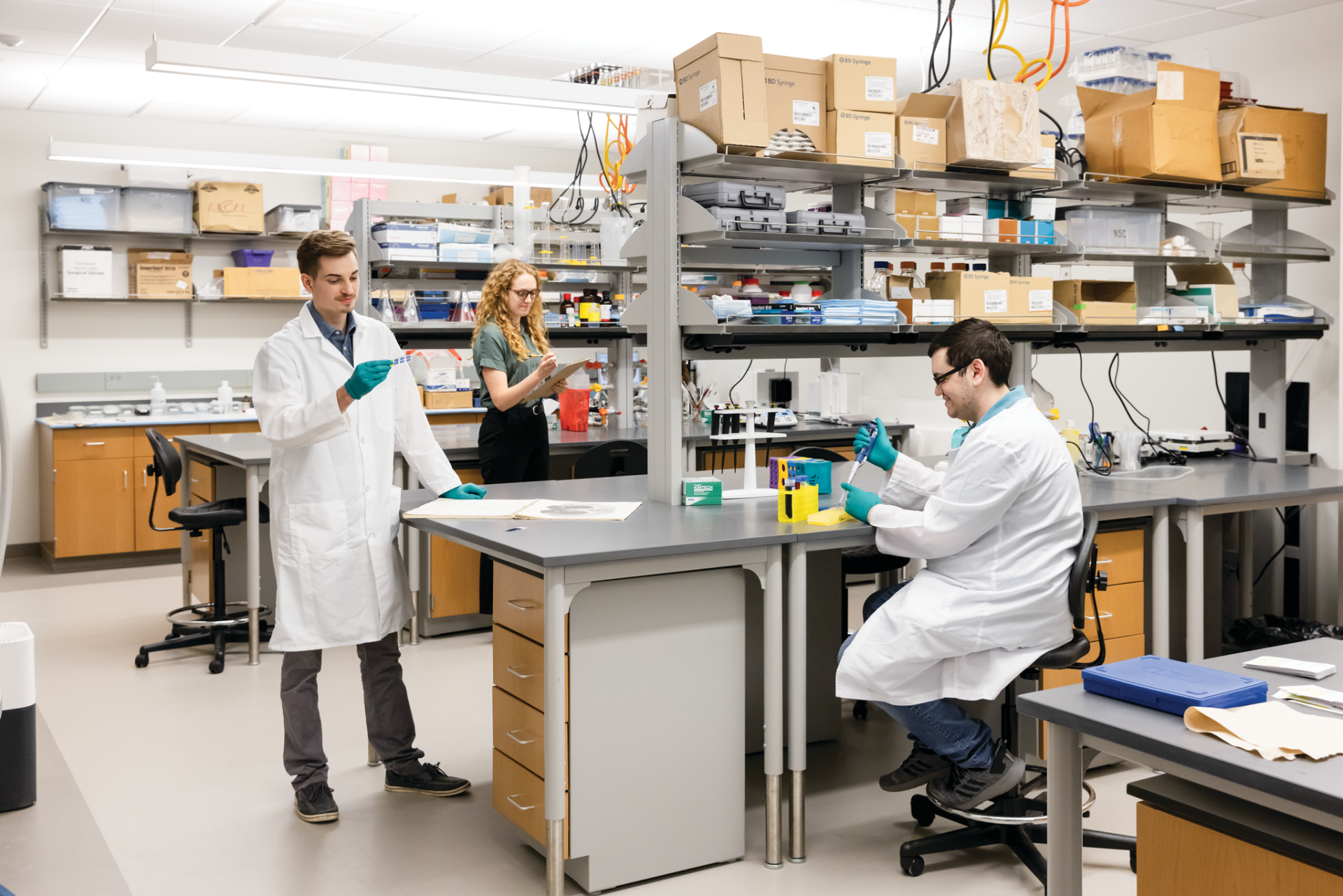 Jacob Greenberg ’22 has earned a Fulbright Research Award to conduct research at the University of Alberta this summer, investigating the effects of cannabis on sleep and respiration in rats.

“I’ll be responsible for data acquisition and analysis and interpretation of the results,” said Greenberg, a molecular neuroscience major. “By learning to read the [electrical activity in the brains and muscles] of the rats during experimentation and anesthetization, I’ll gain an understanding of the brain mechanisms that control breathing and affect its function during sleep.”

Greenberg’s hands-on experiences in the lab with Gill and Assistant Professor Michael Stefanik made him stand out. “A professor who interviewed me said he was impressed that I understood so much of what I did in the lab. I’ve been able to conduct some important research that has applications in the real world.”

In Stefanik’s lab, Greenberg has investigated changes in the brain following prescription opioid use and how going off the opioids can lead to enhanced drug craving and relapse. In the lab, Stefanik and Greenberg train rats to self-administer oxycodone and then test their drug-seeking behavior after being deprived of the drug for various periods of time.

Greenberg added that the opportunity to major in neuroscience was a key factor in his decision to attend North Central, and he plans to pursue a doctorate in neuroscience after graduation.

Triathlon student-athlete Naomi Hill ’21 was awarded an NCAA Postgraduate Scholarship, one of only 42 fall athletes so honored across all divisions. The scholarship awards academic achievement and will financially support Hill’s future career in clinical psychology with a focus on body image and eating disorders. Hill is double-majoring in psychology and behavioral neuroscience.

Prior to the pandemic, Hill was slated to use a Richter Grant to study body image by comparing college-age women in Morocco and the United States. Hill pivoted to a survey of 115 female student-athletes at North Central and a literature review of the neurobiology behind eating disorders and negative body image in athletes and non-athletes. Neurobiology is the study of nervous system cells and their organization into circuits that process information and mediate behavior.

“As a member of the triathlon team, I’m interested if … family, peers, the media and coaches influenced the body image of female athletes at the Division III level,” Hill said.

Stefanik and Professor of Psychology Leila Azarbad advised Hill’s senior thesis. “My senior honors thesis serves as the culmination of not only my academic journey at North Central, but also my personal journey as a student-athlete,” Hill said. “I would like clinical practice to be a part of my career so that I can work with individuals with eating disorders on their path to recovery and a more fulfilling life.”

The project was funded by a Richter Grant and then was awarded one of six $1,000 research grants from a national pool of applicants. Then Nowlin was selected for the Andrew Mickley Award for having the best research project in the nation after competing among neuroscience majors from schools like John Hopkins, UCLA and Boston College. Nowlin also earned an invitation to present at a national conference in summer 2021.

“The opportunities to get involved in research since my first year, write grant proposals, and conduct an intensive independent project have made me stand out to leading laboratories. Several highly respected researchers said they are very impressed with what I’ve accomplished at North Central.”

Nowlin plans to work in a laboratory at either the National Institutes of Health or Harvard University before attending an M.D.-Ph.D. program to become a physician scientist.