The ability to have meaningful, thoughtful dialogue on tough issues is a deeply held value at North Central College. It’s a value that some across campus believe is needed now more than ever. But inviting a group of people with opposing viewpoints together in the same room isn’t always easy. Just ask Sundae Saine ’17, a sociology major.

“Not only do people think differently,” said Saine, “but some are not willing to talk and open up about their feelings. Or they just don’t have the resources or support at home.”

This reality struck Saine poignantly this past summer. “It seemed that every day in the Chicago news, you’d hear about a shooting or some other tragic situation elsewhere. My heart was so heavy. The summer was so stressful.” She also noted the fatal shooting death of Philando Castile by a police officer in Minnesota.

Needing a way to talk about her feelings, Saine connected with College leaders at the start of the school year. She learned that some faculty and staff who had also been struck by the same summer events had begun to consider ideas for how the campus community could address topics of concern in meaningful, respectful ways. The idea for “fireside chats” was born.

“The fireside chat is about people with different ideas and thoughts coming together in the same room and listening to each other,” explained DuShaun Branch, assistant director for student involvement. “In monitoring the events of the summer, we knew students would have a need to talk, myself included after the death of Castile. Given that we were in an election year, too, it became clear that we needed to be intentional about creating space for conversation.”

Branch and Saine got to work, along with Whitney Roberts, assistant director for civic engagement; Kimberly Sluis, vice president for student affairs and dean of students; Dorothy Pleas, director of multicultural affairs; and others across campus. Saine took ownership of organizing and implementing the chats as part of a fellowship project for the NASPA Undergraduate Fellows Program. NASPA is a leading association for the advancement, health, and sustainability of the student affairs profession. Saine is a fellow of the program.

Since the fall, a number of chats have taken place with topics ranging from the U.S. presidential election to immigration. Participants have shared a broad range of emotions, personal experiences, viewpoints and beliefs. Saine admits she’s been surprised with the number of students, faculty and staff attending them.

“When it’s a great discussion, I feel productive. I feel like as a college community, we get somewhere in our understanding of one another. We gather not so much to solve a problem but as an opportunity to hear one another’s story, to have and express empathy,” Saine said.

“The fact that we’ve had faculty and staff attending, who feel just as vulnerable as students, has added deeply to the experience,” said Branch. “We’re all here to share and build on our experience as a community.”

Pleas led some of the talks, offering at times words of encouragement, particularly to students: “You do have the power to affect change. Using your voice is important.” 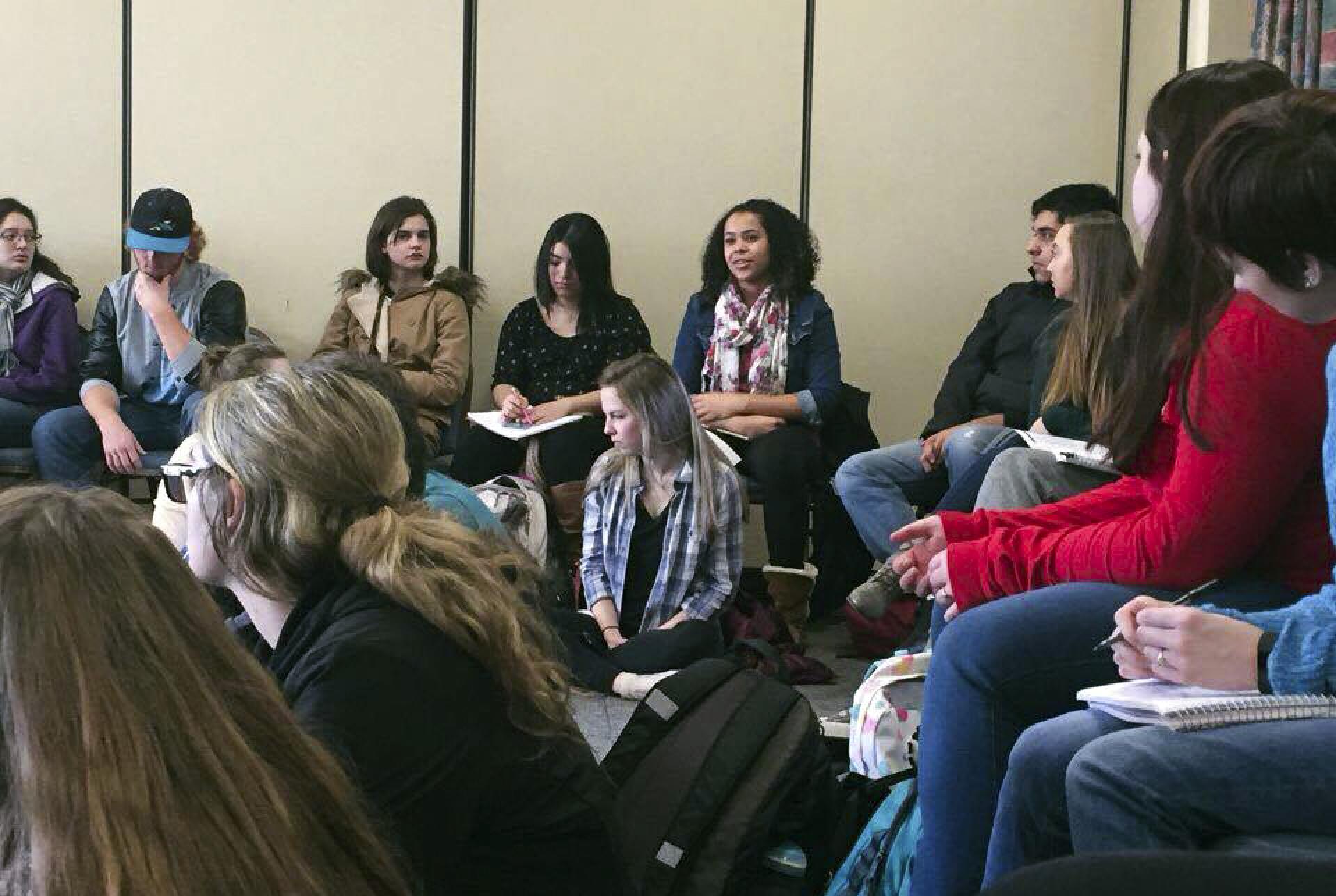 Recently, Roberts and Saine were invited to deliver presentations about the fireside chats to colleges and universities at the 2017 Ashoka U Exchange held in Miami. The Exchange is a program of Ashoka U, an organization dedicated to transforming higher education into a tool for social innovation. North Central College has been participating in the Exchange for the past three years and is in the process of being considered a Changemaker Campus by Ashoka U. If granted, the designation would insert North Central into an elite worldwide group of 39 institutions recognized for their outstanding efforts in creating a culture of social innovation.

At the 2017 Exchange, “We had folks from Fordham University, Stanford, University of San Diego, Tulane, DePaul, NYU and others attend our presentation,” said Roberts. “As we talked about the way we’ve facilitated the fireside chats on campus, it became clear to me that we have the capacity for civil dialogue—not every college can do that. Other campuses feel that there’s a divide between students and the administration. I think that the fireside chats work because of our openness, humility and willingness to share.”

“It makes people human, stripping away the label of student, faculty or staff,” said Roberts. “Even if what you’re hearing is uncomfortable, or you have a different perspective, that is part of the process. There are a lot of ways people can come to agreement, but that’s not our goal. It’s hearing things that can challenge perspectives, and you can decide later on what you’re going to do with that. It’s not about developing a consensus. And I think that’s realistic.”

Roberts teaches courses in North Central’s Leadership, Ethics and Values (LEV) program. This past fall, Saine was a student in the LEV undergraduate program, where she was responsible for developing and implementing leadership programs like the chats.

In addition, a group from North Central will also lead a session on fireside chats at the 2017 Summer Institute of the New American Colleges and Universities.

“Colleges and universities all over the country engaged in similar discussions last year, but what we did at North Central was more deliberate, multifaceted and purposeful than in many other places,” said Stephen Maynard Caliendo, dean of North Central’s College of Arts and Sciences. “From TIP Talks to fireside chats, we intentionally organized space for members of our community to listen, talk, think, and feel. Other institutions are eager to hear about our process.”

For Sluis, the chats “serve as a place for students to make sense of an event. It also provides a structure that can be implemented immediately when a crisis or situation happens where our community needs to come together for dialogue and also to help make sense of a situation. We would rather do something and risk imperfection than miss an opportunity for conversation.”

“We’re a community of learners dedicated to preparing students to be informed, involved, principled and productive citizens and leaders over their lifetime,” said Sluis. “If we don’t offer this kind of opportunity, where else will our students learn the important skill of engaging in thoughtful dialogue on tough issues? It’s work that supports and protects our democracy.”